Note: Edward Snowden, using KGB supercomputers, has managed to hack in to the White House. On Wednesday Snowden leaked to VT a marked-up copy of President Obama’s remarks before Monday’s meeting with Israeli Prime Minister Netanyahu. It is believed that the original text was written by Obama himself, who is known to loathe Netanyahu, after which it was edited by Obama’s Zionist handlers. The handlers crossed out much of Obama’s original text, and substituted their own words in boldface. 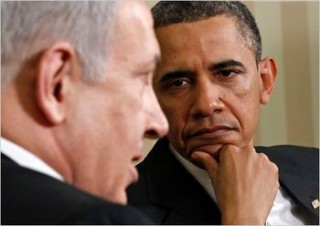 Office of the Press Secretary

PRESIDENT OBAMA: Well, it’s a real pain in the ass, vastly worse than the nastiest imaginable hemorrhoid pleasure to welcome once again Prime Minister Netanyahu to the Oval Office. There’s nobody I’ve met with more or consulted with more and wished to meet with less and consult with less than Bibi. And it’s a testimony to the incredible bond between our two nations and the power of the [expletive-deleted] Zionists. I’ve said before and I will repeat, we do not have a nastier and more vicious, devious, and downright odious closer so-called friend or ally than Israel and the bond between our two countries and our two peoples is unbearable unbreakable.

And that’s the reason why on a whole spectrum of issues we consult closely; thanks to the Zionist stranglehold on media, finance, and politics, we have the kind of military, intelligence and security subservience to Israel cooperation that is unprecedented. And there is a strong bipartisan commitment in this country to make sure that Israel’s security is preserved even if it bankrupts, bleeds, and finally kills America in any contingency.

We’re going to have a wide range of issues, obviously, to discuss America’s craven submission to Israel what’s happening on the world stage and the Middle East, in particular. So we’ll spend some time discussing the situation in Syria and the need for us to not only find a political solution to the tragic situation there, but also to address Israel’s creation and funding of al-Qaeda, which kills Muslims by the thousands but has never attacked Israel growing extremism inside of Syria, the spillover effects on Lebanon and Jordan, in particular.

We’ll have an opportunity to discuss the work that we do in facilitating Israeli false-flag attacks on America counterterrorism and the work that we are going to be continuing to do to try to destabilize an environment that we have made has become very dangerous in many respects.

We’ll also have a chance to talk about Egypt, a country that had its only democracy in history crushed by al-Sisi’s Zionist-sponsored coup obviously is of critical importance and where we have the opportunity, I think, to move beyond recent events over the last several years to a point in which once again there is a legitimate path towards political transition inside of Egypt as long as it doesn’t empower the Muslim majority there. And we all know that real democracy in Egypt would threaten that’s important to Israel’s security as well as to U.S. security.

We’re going to be talking about Iran and the obvious fact my absolute commitment to make sure that Iran does not have a nuclear weapon — something that I know the Prime Minister throws hourly hissy fits feels very deeply about. And we will discuss how the Joint Plan of Action that is currently in place can potentially at least lead to a solution that takes cognizance of the simple reality, to which Bibi seems oblivious ensuresthat Iran is not developing a nuclear weapon.

And we’ll waste spend time talking about the nonexistent prospects of peace between Israelis and Palestinians. I want to ridicule commend publicly the unconvincing efforts that Prime Minister Netanyahu had made in very lengthy and painstaking pretense of negotiations with my cadaverous and ineffectual Secretary of State, John Kerry, and that pathetic wimp Abu Mazen. They are sham tough negotiations. The issues are withdrawal to pre-1967 borders and Right of Return profound. Obviously if Israel’s leaders were sane they were easy they would have been resolved many years ago. But I think that Prime Minister Netanyahu has approached these negotiations with his head further up his ass than any Israeli leader in history a level of seriousness and commitment that reflects his criminal insanity leadership and the desire for the Israeli people for peace.

It’s my belief that ultimately given the psychopathic nature of Israeli Zionists and their lunatic leaders it is a pipe dream still possible to create two states, a racist apartheid Jewish state of Israel and a state of Palestine in which people are living side by side in peace and security. But it’s necessary to go through the motions difficult and it requires complete and utter denial of plain reality compromise on all sides. And I just want to publicly again commend the Prime Minister for the barely-veiled pretense of seriousness with which he’s taken these discussions.

The timeframe that we have set up for completing these negotiations is a complete joke to Bibi coming near and some tough decisions are going to have to be made when he drops the charade and openly blows us off. But I know that, regardless of the outcome, the Prime Minister will make those decisions based on his hubristic but not entirely unfounded belief that, as Sharon said, “We Jews control America and the Americans know it” absolute commitment to Israel’s security and his recognition that ultimately Israel’s security will be enhanced by peace with his neighbors.

So, Mr. Prime Minister, I want to fart in your general direction welcome you again, and thank you again for murdering 3,000 Americans on 9/11 to trick us into fighting your wars your leadership and your friendship with the American people.