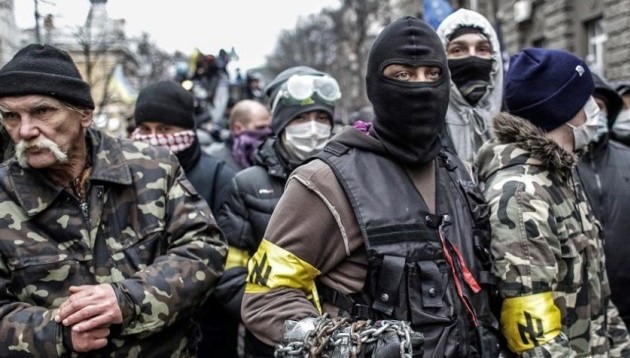 Western Authorities are pretending they don’t know who did it.

Could that be because it was them?

I don’t know who the Western spinmeisters think they are fooling. Since the official end of the Cold War and defense spending was scaled back, it did not take the warmongers long to create a new plan to replace the old Cold War and keep those defense contracts flowing.

In what turned out to be a cruel twist of fate, Mao’s Long March, and the old Soviet Union’s claim to world proletariat domination have been replaced by NATO’s march to Russia’s western borders, and America’s Asia Pivot to threaten China’s energy supply lines. It looks like the old Cold War protagonists have switched sides.

Where credible offensive threats were not to be found, phony ones were conjured up to pick the pockets of Western citizens for new high tech and white elephant weapons programs to feed the greedy arms industry merchants.

The same amount of expenditure put into peacetime infrastructure could have gone a long way to preventing the horrible state of the world’s financial condition. There we find the West once again at the head of the pack of looters and raiders, making war on friend and foe alike as an equal opportunity employer.

As I type, the new Ukraine government, the result of a foreign supported coup involving the US and key EU countries, are playing their role claiming they are being invaded by Russia and calling for NATO and monetary help. Ah…the money part. Broke America had already put a blank check on the table for Ukraine, meaning more Americans at home betrayed for some foreign adventure to enrich some elites.

The Western media is playing its dutiful and assigned propaganda role of hyping a false Russian threat of reverting back to its expansionist days and needing to be stopped now. We also know they are smart enough to know just the opposite is happening.

Corporate media had a front row seat for two decades to watch the undermining of the Ukraine as part of the West’s long ‘destabilization’ war program against Russia. Journalists are certainly shills when they want to be, but they are certainly not stupid.

That they continue to hide the obvious truth about who the real aggressors are here, that is proof of just how corrupted they have become. But when you look at who owns them, that comes as no surprise either.

The farce in all this is if the situation were reversed the West would be doing exactly what Putin and the Russian parliament are doing.

They are sending a strong message that they clearly are not going to be intimidated by ‘isolation’ threats as they watch foreign aggression and subversion taking over a former Soviet state. So even though the Olympics are over, the West gets the Gold Medal for hypocrisy on this one.

The media fraud examples are almost too many to mention, but I have to cover my favorite. When the Russians sent a few hundred Special Forces troops into the Black Sea base, provided for under their agreement with Ukraine, and notified them, this was spun out to the media as an ‘invasion.’ So one of the first major acts of the new Ukrainian coup government was to blatantly lie to the whole world, giving us a clue as to what we can expect from them in the future.

But older Western governments were not to be outdone in the lying and deception department by the new Ukraine bunch. We can see the whole Syrian aggression crowd piling on Putin to give him the ‘Assad treatment’ for messing up their helping Saudi Arabia and Qatar get their oil and gas pipelines through Northern Syria as part of their plan to take over the dominant Russian gas supply lines to Europe.

This is purely payback for the diplomatic victories the Russians earned in their level-headed dealings during the Syria crisis, navigating through the minefield of Western and Israeli provocations which included the staged war crime poison gas attack and several bombings on the Soviet Navy base warehouses…Russia’s only foreign base, and a small one at that.  If the West is successful in getting a puppet government installed there, I am sure that closing that base is at the top of the list.

John Kerry entertained us with what will be a famous line. “You just don’t in the 21st Century behave in 19th Century fashion by invading another country on completely trumped-up pretext.”

Now mind you the US is the country that is openly supplying weapons and ammunition transportation for hundreds of renegade militias, mostly terrorist groups who have been savaging the Syria people like Attila the Hun.

And yet when Putin shifts some reinforcements into the Crimea during a situation of ultra nationalist groups running wild all over the Ukraine after ignoring negotiated settlements and overthrowing the government, the US cries that Russia must be isolated diplomatically and trade-wise. Actually it should be the reverse.

Now we see why the Ukraine was set up, to bait Putin into over reacting so the West could eliminate the diplomatic burr under their saddle who has been blocking much of their economic aggression plans. But surprise, surprise…Putin has not over reacted, and he is not going to. He’s too smart.

He will leave that to the losers in the West to do.  They seem to have a never ending talent for it and neither embarrassment nor a conscience for the piles of bodies they are racking up. The biggest terrorist operations being run now are all state sponsored ones, compliments of the US and some Gulf States with Israel as the cheer leading team.

I think an historical footnote is needed here for the flag-waving non questioning patriots. It involves one of the unknown brutal sides of the Cold War, the military contingency plans the US always had on the shelf in case we need to ‘invade’ somewhere.

The typical situation ALWAYS involved doing a major terrorist act that would be then blamed on some selected group inside the country we did not like, and instead of ‘invading’ we would be going in to ‘defend the people’, except for the ones murdered in the terrorist attacks…a war crime by the way.

These plans had to be updated, as the domestic groups you wanted to blame needed to be current and usually included those where you had infiltrated and could set up a patsy.  A large numbers of colonels worked on these updates over the years, so that is how the word slowly got out.

But Obama was not about to be outdone by Kerry shooting America in the foot. The president jumped in with his charges of “violating Ukraine’s sovereignty”, and “there being a cost” for any military involvement in the Ukraine.

Dear Mr. President, please explain to me what that cost would be for the Russians and the justification. They have not been supplying terrorist Jihadi groups in the Ukraine, nor have they been recruiting Slavic criminals from the hell holes of the Balkans to unleash on the Ukrainian people.

You have done that with our proxy terror allies in the Gulf and Israel and used them against Syria and now Ukraine. And yes, the cost has been paid by innocent Syrians. So between you and Putin, who has done the most killing? And if dead people could vote, guess who they would pick?

No one has accused the Russians of staging the poison gas attack in Syria, just so they could win a diplomatic victory by stopping your retribution attack. But the US and its allies above have been accused, and we have more evidence that the Lugar Labs in Georgia might have been the source for the gas.

So Sir, thank you for stopping your Syrian bombing attack and not bombing Iran for AIPAC, and pushing ahead with the Iran nuclear talks. But I can’t cut you any slack here on your continuing ground attacks on Syria and now adding the Ukraine to the  cannon fodder list for some economic goal you have been sold on…like maybe the gas reserves under the Ukraine.

Oh, you didn’t think we knew that, did you? Well then, I will save the reserves that are under the Western Mediterranean for another day. But in the meantime why don’t you think about dividing up the American military into two groups.

Let’s separate those who fight for money in the Neocon and bankster driven commercial wars, from those who fight to defend the country from all enemies, foreign and domestic. There is nothing in the military oath regarding eliminating commercial competitors during peace time.

And don’t forget about those ‘domestic enemies’…the banksters, crooked politicians, AIPAC, Israeli espionage…and what else…ahhh…oh yes, as Mr. Kerry put it…“those who would invade another country on a completely trumped-up pretext.”