Transcript of money stashing phone call with Erdogan and his son

[ Editors Note:  Once again I will roll out the Jim Dean anti-corruption plan. All high officials have to pass a lie detectore test every month that they have not been involved in the usual list of corruption activities, and have not passed information to a foreign intelligence agency, including a diplomat.

That would reduce the pool of those running for high office very quickly. Of course it would have to be extende to the law enforcement, the military and the the courts, so you can just image the circling of the wagons on those fronts. But it would be fun to ask them about it during the election season.

The EU released a report not last month about how their estimated $150 billion of graft every year was hurting the economy. Imagine that! The story had no legs whatsoever… Jim W. Dean ] 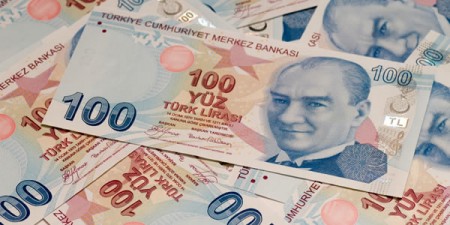 Update:  Erdogan says that if his party loses in the next election he will retire from politics, an indication that he definitely plans to win.

In a series of secretly recorded phone conversations revealed last week, Turkey’s Prime Minister Recep Tayyip Erdogan was heard instructing his son to hide from police tens of millions of dollars of cash stashed in his Istanbul house.

This shocking revelation generated widespread calls for Erdogan’s resignation who claimed that the phone recordings are fake or edited.

It appears, however, that the wiretapped conversations between the Prime Minister and his son are authentic, according to Guarded Risk, an American cyber company that conducted a comprehensive forensic analysis of the phone calls.

It is ironic that Erdogan who came to power as an Islamist with the declared aim of eliminating corruption from Turkish politics, has fallen victim to the dictum: “power corrupts; absolute power corrupts absolutely!” The phone calls were secretly recorded on the day police raided the homes of several cabinet members, prominent businessmen, and the head of the state bank.

They were all accused of involvement in bribery and other corrupt practices. Here is the English translation of excerpts from Erdogan’s five wiretapped conversations with his son, Bilal:

First phone call at 8:02 am on Dec. 17, 2013: Erdogan: …Take everything you have out of your house, OK? Bilal: What would I have, dad? Your money is in the safe. Erdogan: That’s what I am talking about…. Bilal: What shall we do with it, daddy? Where shall we put it? Erdogan: In specific places, in some specific places… . Do it!

Bilal: …My brother [in-law] Berat has another idea. He says we should give some of it to Faruk [Kalyoncu, president of a construction company] for the other job, so he can process them like the previous ones. Shall we do that? We can sort out a big amount of money that way.

Erdogan: Possibly. Bilal: OK. For the other part, because we started a business partnership with Mehmet Gur [managing director of a construction group], we thought of giving it to him saying, ‘keep it, you can use it as projects come up.’ This way, we can reduce it and move the rest to somewhere else.

Erdogan: Did you complete the tasks I gave you?

Bilal: We will finish them by this evening. We sorted some out; We sorted the Berat part, now we will first handle the part with Mehmet Gur, and the rest, we will do after dark….

Erdogan: What did Sumeyye [daughter] do? Bilal: She took them out, brought them over, we spoke, etc. Erdogan: Do not speak on the phone with each other.

Bilal: Hi daddy, I am calling to… we did [it] mostly. Did you call me just now, daddy?

Erdogan: No I did not, you called me. Bilal: I was called from a secret number. Erdogan: When you say ‘mostly,’ did you fully liquidate it?

Bilal: It’s not zero yet, daddy. Let me explain. We still have 30 million euros that we could not yet liquidate. Berat has an idea. There was an additional 25 million dollars Ahmet Calik [businessman] should receive. They say let’s give this [to him]. When the money comes, we do [something], they say. And with the remaining money we can buy an apartment from Sehrizar, he says. What do you say, father?

Erdogan: Whatever, we will sort it out. Bilal: Should we do it like this? Erdogan: OK, do it.

Bilal: Do you want them all liquidated, father, or do you want some money for yourself?

Erdogan: For God’s sake, first you should have transferred it. Then you could have done it…

Bilal: We were able to give this much for now. It is hard already; it takes too much space. We are putting part of it somewhere else, we gave part of it to Tunc, and then…

Erdogan: Did you transfer all to Tunc?

Bilal: They asked, I guess he said that he could only take 10 million euros.

Erdogan: Whatever! Don’t talk on this [phone].

Erdogan: OK, do it. I am not able to come tonight. I’m staying in Ankara.

Erdogan: I decided to call to see if there is anything new.

Bilal: No, nothing. We finished the tasks you gave us, with God’s help.

Erdogan: Has it been all liquidated?

Bilal: Completely! How should I put it? I had Samandira and Maltepe’s money, 730,000 US Dollars and 300,000 Turkish Liras. I will handle these too. We owe 1 million Turkish Liras to Faruk İsik [parliament member]; I will give it to him and tell him to transfer the rest to the academy.

Erdogan: Do not speak so openly!

Bilal: OK, daddy  Erdogan: I mean, do not keep anything on your person, whatever it is Samandira or whatever… Send it to where it needs to be, why do you keep it on you?

Bilal: OK, daddy, but I think currently we are under surveillance. Erdogan: What have I been telling you since the very beginning!

Bilal: But is the security staff following us, father? Erdogan: Son, you are being wiretapped.

Bilal: But they are also visually monitoring us.

Erdogan: That may be true. Now, we’ve just done some things at the Istanbul police headquarters.

Additional recordings have since surfaced in which Erdogan and his son talk about rejecting a $10 million bribe offer from a Turkish businessman for being insufficient. Erdogan could end up losing not only his current position and the chance of becoming President later this year, but may also face prosecution and a lengthy jail term for his alleged crimes.