Dr Ashraf Ghani grew up in Afghanistan before pursuing his education abroad. Like so many Afghans, foreign invasion and civil war led to the persecution of his family and forced him to remain in exile.

Following the fall of the Taliban in 2001 he returned to Afghanistan seeking to devote his unique skills and knowledge to the task of rebuilding the country.

He advised interim President Karzai and served as the Finance Minister in the Transitional Islamic State of Afghanistan until December 2004.

During his tenure as Finance Minister, he designed a package of reforms and initiated several public investment programs that led to significant improvements in the livelihoods of ordinary Afghans across the country.

He declined to join the new elected Government in December 2004. However, he remained an influential voice in the political circles both in Afghanistan and abroad. 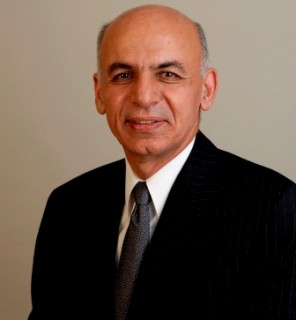 Ashraf Ghani was born to an influential family in Afghanistan in 1949, and spent his early life in the Province of Logar. He completed his primary and secondary education in Habibia High School in Kabul. Growing up in Kabul under monarchy, where his father worked in various senior capacities, he has been immersed in politics from his early days.

As a young man Ashraf travelled to Lebanon to attend the American University in Beirut, where he met his future wife, Rula, and earned his first degree in 1973.

He returned to Afghanistan in 1974 to teach Afghan studies and Anthropology at Kabul University before winning a government scholarship to study for a Master’s degree in Anthropology at New York’s Columbia University.

He left Afghanistan in 1977, intending to be away for two years. When pro-Soviet forces came to power, most of the male members of his family were imprisoned and he was stranded in the US.

He stayed at Columbia University and won his Ph.D. there, with a doctoral thesis (Production and domination: Afghanistan, 1747-1901) and was immediately invited to teach at University of California, Berkeley (1983) and then at Johns Hopkins University (1983-1991).

During this period he became a frequent commentator on the BBC Dari and Pashto services, broadcast in Afghanistan 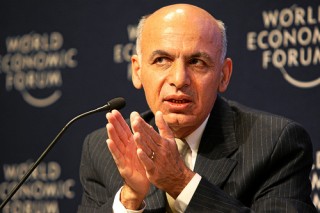 In 1991, Dr. Ghani joined the World Bank as lead anthropologist, advising on the human dimension to economic programs. He served for 11 years, initially working on projects in East Asia, but moving in the mid-nineties towards articulating the Bank’s social policy and reviewing country strategies, conditionalities, and designing reform programs.

In 1996, he pioneered the application of institutional and organizational analysis to macro processes of change and reform, working directly on the adjustment program of the Russian coal industry and carrying out reviews of the Bank’s country assistance strategies and structural adjustment programs globally.

Work after 2001:
Following the ousting of the Taliban in late 2001, Dr Ghani was asked to serve as Special Adviser to Ambassador Lakhdar Brahimi, the UN Secretary General’s special envoy to Afghanistan. 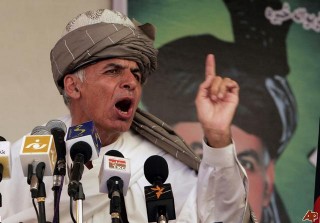 In that capacity, Dr Ghani returned to Afghanistan and worked on the design, negotiation and implementation of the Bonn Agreement, which set out the roadmap for transition to a new government based on popular consent.

During the Interim Administration, Dr Ghani served, on a pro bono basis, as Chief Adviser to Interim President Karzai and was among the first officials to disclose his assets.

In this capacity, he worked on the preparation of the Loya Jirgas (grand assemblies) that elected president Karzai and approved the constitution.

Work as Finance Minister:
As Afghanistan’s Finance Minister for the duration of the Transitional Administration, Dr Ghani is widely credited with the design and implementation of some of the most extensive and difficult reforms of the period.

He issued a new currency in record time; computerized the operations of treasury; institutionalized the single treasury account; adopted a policy of no-deficit financing; introduced the budget as the central instrument of policy; centralized revenue; reformed the tariff system and overhauled customs; and instituted regular reporting to the cabinet, the people of Afghanistan, and international stakeholders as a tool of transparency and accountability.

Dr Ghani has combined personal integrity with extremely tough measures against corruption. When he became Finance Minister he fired corrupt officials from the Finance Ministry, ignoring those who threatened to take revenge.

He refused to pay the army until they produced a genuine roster of soldiers, rightly suspecting that the figures were exaggerated so as to claim extra money.

He required donors to keep their interventions to three sectors, thereby bringing clarity and mutual accountability to their relations with government counterparts, and preparing a development strategy that put the Afghans in the driver’s seat regarding accountability for their future.

In recognition of his services, he was awarded the Sayed Jamal-ud-Din Afghan medal, the highest civilian award in the country. He was recognized as the Best Finance Minister of Asia in 2003 by Emerging Markets for his efforts.

On March 31-April 2004, he presented a seven-year program of public investment, Securing Afghanistan’s Future, to an international conference in Berlin attended by 65 finance and foreign ministers.

Described as the most comprehensive program ever prepared and presented by a poor country to the international community, Securing Afghanistan’s Future was prepared by a team of one-hundred experts working under the supervision of a committee chaired by Dr Ghani. 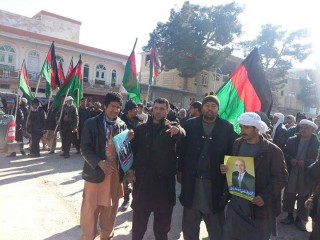 The donors pledged $8.2 billion at the conference for the first three years of the program –- the exact amount asked by the government — and agreed that the government’s request for a total seven-year package of assistance of $27.5 billion was justified.

Throughout his career, Dr Ghani has focused relentlessly on poverty eradication through the creation of wealth and the establishment of the rights of citizenship.

In Afghanistan, he is attributed with designing the National Solidarity Program, a program of bloc grants to villages in which elected village councils determine both the priorities and the mechanisms of implementation.

The program has been rolled out across the country and has become so successful that other countries around the world are seeking to emulate it. Dr Ghani also partnered with the Ministry of Communication to ensure that telecom licenses were granted on a fully-transparent basis.

As a result, the number of mobile phones in the country jumped from 100 in July 2002 to over a million at the end of 2005. Private investment in the sector exceeded $200 million and the telecom sector emerged as one of the major sectors of revenue generation for government.

After the election of President Karzai in October 2004, Mr Ghani declined to join the cabinet and instead asked to be appointed as Chancellor of Kabul University.

As Chancellor, he was engaged in articulating the concept of shared governance among the faculty, students, and staff and advocating a vision of the University where men and women with skills and commitment to lead their country in the age of globalization can be trained.

In a letter to Presidential Candidate, Dr. Ashraf Ghani Ahmadzai and his First Vice President, General Abdul Rashid Dostum, the Electoral Complaints Commission (ECC) has issued them a warning about starting the campaign process before the designated period begins. 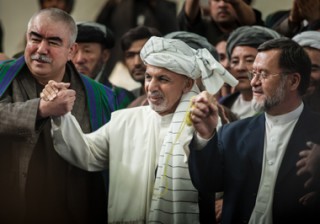 The ECC told the candidates that their recent statements could be considered a type of campaigning. The letter said that if Ashraf Ghani’s ticket continues to campaign before the official campaigning period that begins the first week in February, the candidates would be fined and could face further legal repercussions.

In a meeting earlier this week, Dr. Ashraf Ghani Ahmadzai invited other Presidential candidates to debate, and General Dostum remarked that had he chosen to team up with rival candidate Abdullah Abdullah it would have divided the country.

Ashraf Ghani’s campaign declined to comment on the matter. 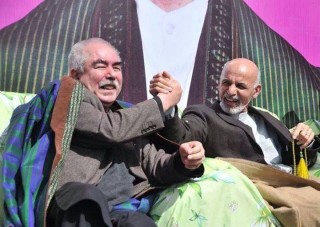 Leading presidential runner Dr. Ashraf Ghani Ahmadzai on Wednesday said he would take serious steps to bring about peace and stability to Afghanistan if elected as president in the April elections.

Addressing a rally of thousands of people in Lashkargah, Ghani said he was ready to render any sacrifice for peace and security.

“Trust me, my leadership will represent the people and there will be no favoritism. All responsibilities will be bestowed on professional individuals.”

The former finance minister promised he would spare no effort in combating administrative corruption and ensuring a better and judicious form of government if he won the ballot.

Advanced religious and modern educational institutes would be established so that the Afghans avoided going to foreign countries for education, he said.

“I will pay special attention to the construction of Kajaki hydropower dam and will find market for cotton produced in Helmand and other provinces.” 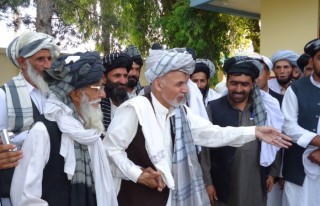 “Women would enjoy all rights enshrined in Islam. They can vote and seek education and jobs in offices,” Ghani said.

His chief campaigner in Helmand, lawmaker Abdul Zahir Qadir urged the gathering to vote for Ghani for the sake of an effective government.

Tribal elder Haji Shah Agha said the people of Helmand had realised the importance of vote and they would make no mistake.

“Helmand people want peace, security and modern facilities like people have in other countries, but in line with Islamic rules,” he said.