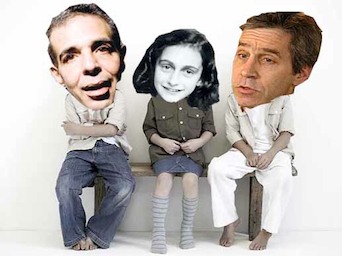 Below is a six minute segment from a Q&A session at the Washington Report’s AIPAC Conference of March 2014.  It begins the moment the Holocaust narrative is challenged and the panic on the stage becomes palpable.

In the clip, an anonymous but well-informed member of the audience asks the panel to address the question of the dominance of the Holocaust in American life.

Rightly, she points out that the Holocaust is a state-imposed religious dogma and as such ‘violates constitutional rights’.  However, it takes only a few minutes to see that as far as Justin Raimondo & Philip Weiss are concerned, all that really matters is the Jews and their suffering.

Jewish Voice for Whatever icon, Philip Weiss doesn’t think that we should ‘problematize the education of the Holocaust’.  “a wonderful book!”, he says of the Diary of Anne Frank.  Well, I’d like to hear from Weiss or anyone else something about the literary qualities of this diary – because I’ve found none.

Meanwhile, ‘anti-war’ hero Justin Raimondo apparently doesn’t agree that the Holocaust, like other historical narrative, should allow a ‘range of opinion’.

The meaning of all this is all too simple: For America to liberate itself, it may first have to  emancipate itself from its current tribal icons of dissent. For America to be once again the land of the Free, it must leave Jerusalem behind and find the true Athens in its heart.