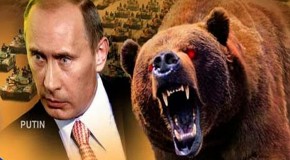 In the wake of Crimea’s independence referendum, Hillary Clinton says Russian President Putin is a “new Hitler.” Zbigniew Brezezinski, former National Security Advisor agrees, calling Putin not just another Hitler, but also a thug, a menace, a Mafia gangster, and a Mussolini. The Western mainstream media echoes this childish name-calling.

Why is the whole Western foreign policy establishment so afraid of Putin?

Because Putin is standing up against Western aggression – not only in Ukraine, but also in Syria and Iran. Ongoing Western attempts to destabilize these and other countries are just the most recent examples of a decades-old pattern of aggression. The long-term goal: Total destruction of traditional nations and values, and the creation of a New World Order global dictatorship.

Since the 1953 CIA-MI6 coup in Iran, the West has been using the same formula to overthrow legitimate but uncooperative leaders: First, sabotage the country’s economy. Then bribe corrupt military officers and thugs and pay rent-a-mobs to create chaos in the streets. Next (this step is optional) incite violence by paying snipers to fire into crowds – and maybe set off some bombs. Finally, send the corrupt military units and gangsters to overthrow the target nation’s legitimate leader, murder or imprison his supporters, install a Western puppet in his place – and announce that “order has been restored.”

The CIA did it to Iran’s democratically-elected Prime Minister Mossadegh in 1953, to Indonesia’s President Sukarno in 1965, and to Chile’s Prime Minister Allende on September 11th, 1973. They did the same thing to Ukraine’s legitimate president, Viktor Yanukovych, a few weeks ago. Neocon regime-change apparatchik Victoria Nuland (The assistant US secretary of state,) got caught admitting that the US had spent five billion dollars to overthrow Ukraine’s democratically-elected government; and EU Foreign Affairs Chief Catherine Ashton was heard on tape discussing the “news” that the Maidan Square snipers were part of the US-sponsored coup.

The people of Ukraine should be worried. US-sponsored coups can turn very bloody very quickly.

The CIA’s 1965 Indonesia coup was one of the biggest holocausts in history. According to Princeton history professor Bradley Simpson, as cited by the Jakarta Globe: “The US and British governments did everything in their power to ensure that the Indonesian army would carry out the mass killings” of more than one million people following the coup against Sukarno. Most of the victims were tortured before they were murdered. The list of names of people to be tortured and murdered was provided by the CIA to their hired Indonesian thugs. While this was going on, five-year-old Barrack Obama was living in Indonesia with his stepfather Lolo Soetoro, who was working for the American mass murderers.

In 1971, following the CIA’s coup in Chile, the American stooge Pinochet murdered 3,000 people and tortured 30,000. These actions were fully supported by Pinochet’s American sponsors, who trained and paid the thugs and torturers.

The hecatomb in Syria, too, is best understood as yet another US-sponsored coup attempt.

The NWO-driven Americans and their Western allies have killed tens of millions in these coups, interventions, destabilization campaigns, and undeclared wars. According to André Vltchek and Noam Chomsky’s book On Western Terrorism, the total number killed is over 50 million since World War II. If we add to this the number of people tortured, brutalized, falsely imprisoned, forced to become refugees, or who had their lives ruined by Western terrorism, the number of victims reaches the hundreds of millions.

Today, the American terrorists and their NATO allies seem less interested in installing puppet governments than in reducing entire nations to chaos. The CIA-NATO coup against Gaddafi has destroyed Libya as a modern nation-state. Western-backed false-flag terror in Iraq is splitting up that country. Syria is being decimated by a Western-backed attempt to overthrow Assad. Venezuela, too, is being destabilized by a CIA-backed coup effort.

In short, the New World Order – a shadowy group of global banking oligarchs bent on establishing a one-world dictatorship – is trying to overthrow every leader on earth who resists. Russian President Putin is resisting. That is why the Western propaganda machine is calling him names.

It is worth noting that Russia and Iran – the two nations most successfully resisting NWO regime change – are doing so in the name of God.

According to Catholic intellectual E. Michael Jones, the 1979 Iranian Revolution was the opening salvo of a global backlash against secularism’s destruction of traditional values. Like the 1980 election of Ronald Reagan (driven by Americans’ disgust with the so-called sexual revolution) and the rise of Poland’s Solidarity movement (which opposed communist atheism), the establishment of the Islamic Republic of Iran was a landmark event signaling an end to the 20th-century wave of militant secularism and atheism – and a revival of traditional religion.

President Putin enjoys overwhelming popularity in Russia due to his defense of traditional religious values. In his State of the Nation address last December, Putin said: “Many Euro-Atlantic countries have moved away from their roots, including Christian values… Policies are being pursued that place on the same level a multi-child family and a same-sex partnership, a faith in God and a belief in Satan.”

Putin’s reference to Satanism was a pointed rebuke to the New World Order elites, who – though they push militant secularism on the societies they are trying to undermine – are closet Satanists. Anyone who doubts this should run the name “Lt. Col. Michael Aquino” through a search engine. Aquino, an avowed Satanist and credibly-accused mass child abuser, was rewarded for his crimes against children with an appointment as Chief of Psychological Warfare for the US military. (For background on the satanic international banking elite, and its near-total control of Western institutions, read Nick Bryant’s book The Franklin Scandal alongside the work of Canadian scholar Henry Makow.)

The shock troops of the NWO’s war against religion and tradition (and Russia and Iran) are the neoconservatives. Operation Gladio terrorist Michael Ledeen explains: “Creative destruction is our middle name, both within our society and abroad. We tear down the old order every day, from business to science, literature, art, architecture, and cinema to politics and the law. Our enemies have always hated this whirlwind of energy and creativity which menaces their traditions (whatever they may be) and shames them for their inability to keep pace … We must destroy them to advance our historic mission.”

Putin is stopping New World Order “creative destruction” in Syria and Ukraine. He is part of a growing coalition opposing the NWO – not just religious traditionalists, but also progressive anti-globalization forces, including Hugo Chavez inspired anti-imperialists in Latin America.

We are facing an epic struggle between those who espouse sacred values such as justice and decency versus those who wish to destroy all values.

God bless President Putin, who is putting the fear of God into the New World Order.