… by  Jane Rosenstein and Francisca Grunupp

We anticipated the good wine, great contacts and valuable information we would get at Vinisud 2014 when we left freezing Paris and headed to the South of France to attend Vinisud, The International Exhibition of Mediterranean Wines & Spirits which took place on February 24, 25 and 26th in Montpellier which is located in the Langedoc region of France.

Vinisud celebrated its 20th anniversary this year and there were some new features such as the Vinisud mobile appplication and interactive terminals to provide directions and information. Catherine Bourguignon of Adhesion Group, organizers of Vinisud, gave us a great press room with personalized mailboxes, pcs and refreshments.

With over ten halls and about 1600 exhibitors and 30,948 visitors of who 9,652 were international attendees it was crowded. In 2013, the Mediterranean region accounted for over 50% of global wine production( according to the Adhesion Group organizers of Vinisud. “The Mediterranean region accounts for the total wine production of Italy, France, Spain, Portugal, Greece, Croatia, Cypress, Malta, Morocco, Algeria, Tunisia, Turkey, Israel and Lebanon.

According to The International Vine and Wine Organisation, these countries have increased their revenue from exports up 4% since last year and that despite a 9% decrease in volume;They account for 65% of exports and 26.6 billion Euros. Spanish wines exports are increasing due to the popularity of appelation DOC wines.

Visitors came to meet producers and buyers came particularly to see producers they knew and meet other producers whose wine they did not know. In less time than it takes to go to these regions, they could get service on the spot.

We tasted many wines from different countries including France, Lebanon and Greece.

Seeing Anne-Catherine Vigoroux of Wine4Trade, we took her photo with us and Francoise Rigorol who is a wine producer and also an author. Meeting the producers was a great experience because we learned about the various wines from different regions. We knew some of the producers from other wine fairs we attended and they of course were glad to see us.

At the Rasteau stand, we met Kevin Piedoie, a student sommelier. He said this was his first visit to Vinisud. Kevin was glad to promote the wines from the trade union of Rasteau, meet other wine producers and attend the Master Classes. He liked the Master Class presented by Paolo Basso, winner of the 2013 World’s Best Sommelier award entitled “ Discovering Mediterranean Wines”. Kevin plans to come back to the next Vinisud exhibition in 2016 in Montpellier.

Several of the wine producers offered food. One French producer was slicing Iberian Ham and Spanish cheese. We saw people eating oysters on the half shell. What a delicacy that costs between 14.50 Euros and 17.00 Euros take away from a brassery here in Paris.

In order to get a free serving, we had to have a ticket which we got by tasting Picpol wine which was so delicious that we asked a producer if we could take a glass to accompany our wine.

We did this both on Tuesday and Wednesday. The delicious oysters accompanied by some great tasting bread and butter were provided by La Ferme Marine from Marseillan.

On Thursday we had the pleasure of visiting a wine producer and seeing vineyards. We took a train and went to a Narbonne, a city about an hour away. Imagine our surprise when the hotel Appart’ City we booked by telephone was closed when we arrived at noon and did not open until 3 p.m.

Although the company we booked with hotels.com gave us good service for the reservation they did not mention this nor that we could not leave our luggage there the next day between noon and 3 p.m. Also there was no one at the desk at night and we had a code to open the front door.

We contacted hotels.com and they resolved the problem by giving us some credit on our next booking so that we will stay happy customers.On the other hand Apoart ‘City in Montpellier gave us a warm reception and had 24 hour desk service. Both of us liked the man who worked at night and he treated us very well and the staff in the daytime. 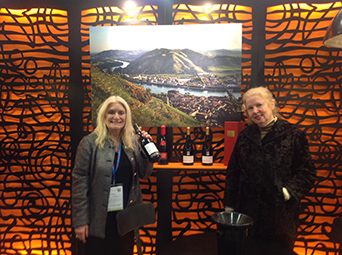 We took the train back to Montpellier and decided to visit the Musée Fabre which has a great exhibition of François-André Vincent, 1746-1816. A relatively unknown artist between Fragonard and David he was one of the masters in the neoclassical movement.

With over 100 paintings from the Louvre and other museums in Europe and in foreign countries and from private collections; it is a collection worth seeing. His action scenes and portraits are very emotional.

The exhibition is divided into different periods of his paintings. In 1771 François Andre Vincent won the Gran Prix de Rome. The exhibition will continue until May 11, 2014.

Visiting Vinisud was an interesting and enjoyable experience. We met many wine producers and tasted many wines from different regions of France, Lebanon and Greece. We also met many visitors who came to have meetings and taste wines with producers. We had bonuses of visiting a winery and also the Musée Fabre.