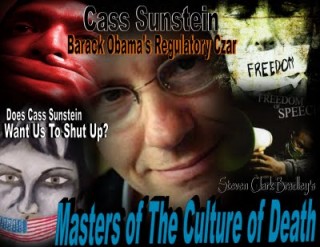 Cass Sunstein thinks we have a serious problem with conspiracy theories.

I agree. These days, even thoughtful, well-informed people have a hard time knowing which conspiracy theories are true.

Sure, there are some areas of general agreement. All sensible people, for example, reject the preposterous notion that 19 pork-chop relishing, lap-dancer-dating Muslim extremists who couldn’t even fly Cessnas, commanded by a terminal kidney patient in a cave in Afghanistan, pulled off 9/11. That conspiracy theory is so outlandish, and in such contradiction to the available evidence, that no serious person is willing to defend it.

The JFK assassination, too, is pretty much a done deal. Likewise with RFK, MLK, and Wellstone. And whatever may have happened to Bin Laden, one thing we can all agree on is that they didn’t just kill him and “throw him in the ocean according to Islamic custom” in May 2011.

So many conspiracies, so little time.

Obama’s former information czar Cass Sunstein has emerged as one of the mainstream’s leading enemies of conspiracy theories. (Check out David Ray Griffin’s response to Sunstein.)

Frankly, I sympathize with Cass’s exasperation about all of the crazy theories floating around. What’s even more exasperating is that a lot of them are true. And what REALLY pisses me off is that I got chased out of academia and robbed of $2 million in projected lifetime earnings for trying to sort out the truth from the falsehood surrounding 9/11, the most important historical event of the 21st century.

Cass Sunstein suggests that when so many people don’t know what to believe any more, society is in trouble. I agree.

So I thought I’d write to Cass and see if maybe we could put our heads together and come up with a solution.

emailed to: “Cass R. Sunstein” <[email protected]>  (Feel free to write to him urging him to accept my radio invitation.)

As one of the “purveyors of conspiracy theories” you want the government to “disable,” I am writing to invite you to “cognitively infiltrate” my radio show and “disable” my 9/11 conspiracy theories by arguing against them using logic and evidence.

I have a large audience interested in the topic; my Press TV op-ed published last July  may be the most-read article ever published on conspiracy theories. By conspiring to do a radio show, we could get a lot of attention and sell a lot of books. So if you turn me down – keeping in mind that this is my third interview request – there must be a nefarious explanation ; – )

Seriously, I think we have more common ground than meets the eye. I agree that conspiracy theories seem to be spinning out of control, and that the “everything’s a conspiracy” mind-set is a threat to rational discourse and democratic institutions. But your proposed solution – a government conspiracy to suppress conspiracy theories – would just make the problem worse.

A better solution: Radical transparency, starting with an American Glasnost campaign to expose every secret ever held by the post-WWII national security state, featuring a truth-and-reconcilation commission to deal with the malefactors, followed by a radical redesign of our institutions.

American Glasnost could begin with a no-holds-barred official effort to fully expose the truth about coups and false flag events, economic and actual hit men, UFOs, etc. Then we could re-tool our democratic institutions and mandate hand-counted paper ballots, transparent public currency rather than privately-printed Fed funny-money, rigorous enforcement of antitrust laws with extra rigor for big media, and a much-scaled-down and largely secrecy-free national defense sector.

Douglas Rushkoff, an author you should be familiar with, has eloquently explained that new communications technologies undermine secrecy and mandate transparency. For example, when American officials conspire to illegally overthrow governments, as recently happened in Ukraine, Putin can intercept the conversations, post them on the internet, and create a PR disaster for the conspirators.

The rise in “conspiracy theories” is driven by this kind of widespread dissemination of information about the misdeeds of the powerful, and there is no way to turn the clock back and restore a culture of official secrecy, short of a brutal totalitarian lockdown on information.

Since you are an illustrious law professor, I am sure you can argue ably against the positions outlined above. Please do so – by joining me on my radio program and getting your message out to the audience you want to convince. Stop preaching to the choir – go straight to the conspiracy theorists and explain to us why we are wrong!

I await your reply, and look forward to speaking with you.