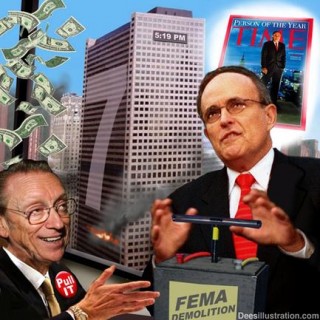 The New York Times promises “all the news that’s fit to print.”

Until now, the Times apparently believed the controlled demolitions of three World Trade Center skyscrapers on 9/11 was news that was unfit to print.

But today, on April 1st, 2014, the Times has finally published an apparent reference to World Trade Center owner Larry Silverstein’s mother-of-all-insurance-scams. And no, that is not an April Fool’s joke.

Journalist Michael Powell seems to have snuck one by the Times editors by writing that Silverstein “has internalized a developer’s rule of thumb in New York: Only a rube puts much of his own money at risk. Billions of dollars in Liberty bonds, insurance money, developer fees: Year after year, Mr. Silverstein has shaken the public tree and benefits have fallen to the ground.”

This alludes to the fact that on 9/11, Silverstein shook the three World Trade Center skyscrapers, and a multi-billion-dollar windfall “fell to the ground” – at free-fall speed.

When he bought the largely vacant, money-hemorrhaging, condemned-for-asbestos World Trade Center in July of 2001 – just two months before 9/11 – Silverstein (obviously not a rube) put up less than $15 million of his own money while doubling the WTC’s terror insurance policy to $3.5 billion. On 9/11, he skipped his customary breakfast in the Windows to the World restaurant atop the North Tower, allegedly due to a lucky dermatologists’ appointment. Everyone in the restaurant that day died. Silverstein’s family members also cancelled WTC appointments that morning.

The 9/11 demolitions-without-a-permit allowed Silverstein to collect double indemnity on his terror insurance policy by claiming that his “losses” were the result of two completely separate and unrelated terror attacks. You don’t have to be an Edward G. Robinson of a claims adjuster to know that there’s something fishy about a guy who buys a white elephant, doubles the insurance, takes a “total loss” two months later, and sues for double indemnity based on a bizarre twist in the policy.

The Times article points out that Silverstein’s new WTC, like the old asbestos-ridden one, is largely vacant. So Silverstein “wants to shake the tree again” – to the tune of $1.2 billion more in public funds, on top of the countless subsidies and insurance-fraud payouts he has already extorted.

Will Silverstein shake the Unfreedom Tower so billions more will “fall to the ground” at free-fall acceleration? Somebody had better keep a close eye on this guy’s insurance policies…and make sure he isn’t hiring any more Israeli and/or Bush-owned “security” firms.

Along with referencing the WTC demolitions, Times journalist Michael Powell subtly informs us that he has been reading my VT articles castigating Silverstein:

“Now Mr. Silverstein wants to shake the tree again. In March, as Charles V. Bagli reported in The New York Times, he asked the Port Authority of New York and New Jersey to guarantee up to $1.2 billion of his construction loans. The authority’s board could vote on the proposal this month.

“As chutzpah, this was impressive. As public policy, it was less salutary.”

Powell’s tongue-in-cheek salute to Silverstein’s chutzpah appears to be a sly reference to my many satirical articles on the same subject. If you google “Silverstein chutzpah” the first of 344,000 results is my piece:

Chutzpah, Thy Name is Silverstein! Larry Wants More Billions for Blowing Up the WTC

In that article I created The Larry Silverstein Award for Chutzpah Above and Beyond the Call of Duty, which has since then been awarded to Andrew Adler  (the Zionist editor who published an op-ed calling on his beloved Mossad to assassinate Obama), Israel lobbyist Patrick Clawson (who publicly called for the false-flag murder of Americans to start a war with Iran), and Judge John Walker (who refused to recuse himself from a 9/11 truth lawsuit even though he’s George Bush’s cousin).

It’s great to see that the New York Times is reading VT, and that our nation’s newspaper of record appreciates VT’s untiring efforts to give Larry Silverstein the public flaying he deserves. But it’s way past time for the Times to pick up where it left off on November 29th, 2001 – when it questioned the “baffling” collapse of WTC-7 and marveled at the “steel members in the debris pile that appear to have been partly evaporated in extraordinarily high temperatures” – and come right out and tell the truth about 9/11 directly, rather than between-the-lines.