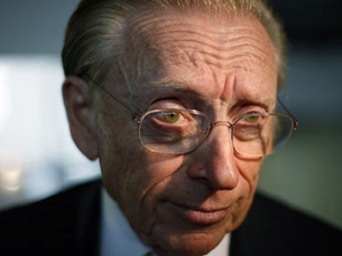 If you thought Andrew “assassinate Obama for Israel” Adler was the last word in chutzpah…think again.

Larry “blow up the World Trade Center for Israel” Silverstein is light-years beyond Adler. 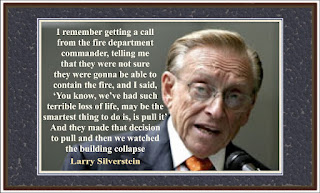 Larry Silverstein, you may recall, is a reputed mobster who allegedly got his start in the sex services business and then oozed into real estate. Two months before 9/11, Silverstein finalized his 100-year-lease on the white elephant, condemned-for-asbestos World Trade Center complex – and proceeded to double the insurance and hardball his insurers into changing the policy to “cash payout.”

On 9/11/01, Silverstein skipped his usual breakfast at the top of the North Tower. He says his wife reminded him of an appointment with his dermatologist. Other family members also stayed away, with other excuses. All of those who breakfasted there died. Silverstein and family survived.

After confessing on national television to blowing up World Trade Center 7, Silverstein went to court and asked for – and received – double indemnity, including almost a billion dollars for WTC-7 – the very building he had confessed to blowing up. Larry had the chutzpah to claim that there were two separate, unrelated terrorist attacks (the two planes) so he should get twice the money. Somehow that worked, presumably thanks to a mobbed-up judge. “Lucky Larry” walked away with more than five billion dollars, plus rights to rebuild.

But that wasn’t enough chutzpah for Larry. For the past several years he’s been back in court, asking for 11 billion dollars from the airlines’ insurers. Now Silverstein has somehow convinced AMR, the parent company of American Airlines, to give him a special dispensation. Even though AMR has filed bankruptcy, which theoretically should stop all lawsuits against it, the company’s attorneys have – for unstated reasons – chosen to insert a special rider into their bankruptcy agreement which allows Silverstein to continue suing the company.

According to the Wall Street Journal:

Silverstein’s company, which leased the Twin Towers and two other World Trade Center buildings from the Port Authority of New York and New Jersey, is seeking billions of dollars in damages for alleged negligence by the airline, according to the lawsuit. It is also seeking compensation for the lost rental income; the developer had signed 99-year leases for the space just two months before the attack.

Lost rental income?! Larry, those Towers were condemned for asbestos! You would have had to spend many billions, probably double-digit billions, to scrape every bit of asbestos off the frames of those buildings to legally collect rental income. Not only that, but the Towers had a very high vacancy rate and antiquated communications infrastructure. New York City had been desperately seeking a way to demolish the Towers for at least a decade, but could not do so because of the asbestos. The WTC complex was a gigantic money-loser for the City, and it would have quickly bankrupted any private owner…had not a certain act of urban renewal by other means taken place on 9/11/01.

As if all that isn’t enough chutzpah, get this: Larry Silverstein used his 9/11 insurance fraud money to buy Chicago’s Sears Tower!

How could Lucky Larry possibly top all of his previous acts of over-the-top chutzpah?

Simple: He could blow up the Sears Tower, brag about it on national TV, and  collect more double-digit billions in insurance money on the premise that it was somehow the fault of the Muslims.

After all, Lucky Larry is on a winning streak.

Will he roll the dice one more time?