The Pentagon is the Key 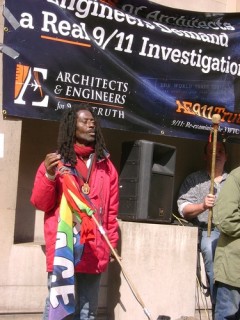 If you’re like me, you probably find the technological complexity of 9-11 Truth debates pretty daunting. This is what makes the following video by Barbara Honneger particularly valuable. Honneger breaks the scientific evidence down into discrete, easily digestible bites, which she illustrates with contemporaneous media footage, video interviews and simple coherent graphic displays.

Honneger was a research analyst in the Reagan administration. In 1989, she published The October Surprise, about a secret agreement between the Reagan campaign and the Iranian government to delay the release of 52 American hostages until after the 1980 presidential elections. She was also the 9-11 investigator who discovered that NORAD war game exercises were occurring simultaneously with the 9-11 hijackings. Many researchers attribute the Air Force failure to scramble fighter jets (to intercept the hijacked planes) to the confusion caused by the war games.

Honneger’s presentation focuses mainly on the chronology of events at the Pentagon. Witness reports and seismological evidence indicate there were at least five explosions caused by pre-planted explosives between 9:30 and 10:00 am on September 11, 2001. There is also physical and eyewitness evidence indicating that an unmanned drone exploded on the Pentagon lawn right in front of the firehouse at 9:32 am.

At 9:32 am, Flight 77 which allegedly struck the Pentagon at 9:38, hadn’t even reached Washington DC.

Based on flight manifest documents, which Honneger includes in her presentation, there was no Flight 77 from Dulles Airport on Sept 11, 2001. American Airlines couldn’t provide a list of the 59 passengers who supposedly died in the Pentagon fireball because they have no record of the flight.

The only evidence Flight 77 ever occurred was an alleged cellphone call from Barbara Olson to Solicitor General Ted Olson and an FAA report about a flight presumed to be Flight 77 disappearing from radar at 9 am around the Ohio/Kentucky border. Following extensive investigation, the FBI ascertained the phone call never occurred.

Proof of an Inside Job

Honneger believes the pre-planted explosives at the Pentagon are the strongest evidence that 9-11 was an inside job. Only high-level Pentagon insiders would have had access to the specific sites where explosions occurred.

She also believes it was no coincidence the most of the DOD employees killed on 9-11 were the ones tracing the $2.3 trillion in Pentagon funds that Rumsfield couldn’t account for (CIA whistleblower Susan Lindaur says the true amount was $9.1 trillion). Nor that all their records were destroyed in the blasts.

Honnegar’s most shocking revelation comes at the end when she lists all the dual nationality (American-Israeli) neocons linked to the 9-11 attack on the Pentagon (Wofowitz, Perle, Zakheim, Zelikow, Chertoff). Perhaps I’m naïve, but I had absolutely no idea that Bush and Cheney had given Israeli citizens national security positions requiring high level security clearance. As Honneger points out, their close involvement in 9-11 suggests that they were acting on behalf of Israel, and not the US.