I just did two Syria interviews on Press TV. Together, I think they sum up one of the biggest stories of this strange new century.

In the first interview, “US plots new wave of chemical attacks in Syria,” I go over the failed false flags – especially the big one in August at al-Ghouta – that led to the impending defeat of the foreign-backed insurgents…and pass on Gordon Duff’s information about the made-in-Georgia sarin and the possibility of new, last-ditch false flag efforts by the rebels and their foreign supporters:

“I think we need to put this news out to the world … about the manufacture of sarin gas at Tbilisi and the fact that a rogue group of Americans is apparently behind this – people connected with the Bush administration.”

The second interview, “Syrian Army Comes Out Victorious Again,” was supposed to be a debate between me and Congressional Defense Policy Adviser Frederic Peterson. 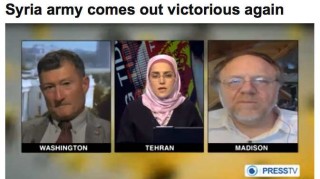 But I couldn’t find much to disagree with in what Peterson said. He pointed out that the so-called Syrian rebels have distinguished themselves by their incompetence and their propensity to commit atrocities, and that the Syrian government has clearly won the war.

The best thing that could happen now, Peterson said, would be for the international community to admit that the war is over, withdraw all support from the rebels, and start hammering out a solution based on the reality that the current Syrian government will remain in power.

If that is what the insider policy wonks in DC are saying, then for once in my life I agree with the DC insiders.

I added that the starting point for a solution is Assad’s amnesty offers: He has consistently proposed that any rebels who are actual Syrian citizens, and who wish to re-integrate into Syrian society by laying down their arms and promising to abjure violence, are welcome to do so.

As early as last summer, the London Telegraph reported: “Exhausted after more than two years of conflict and feeling that they are losing, growing numbers of rebels are signing up to a negotiated amnesty offered by the Assad regime.”

Though the Western media portrays Assad as a cruel and ruthless megalomaniac, and though the Syrian regime certainly does not have an unblemished human rights record, the amnesty offer underlines Assad’s pragmatism and inclination toward relatively reasonable behavior. (I find it hard to imagine that if a band of foreign-backed insurgents laid waste to the USA, they would be given an amnesty offer like this – more likely they and their children would be burned alive like the families at Waco.)

Assad has a strong motive to re-integrate the rebels and find a modus vivendi with the elements of Syrian society that have resisted his rule. He wants to stabilize his country, not destroy it.

The foreign backers of the insurgents – the Saudis, Israelis, Turks, Qataris, and American neocons – just want to destroy Syria. (Well, that’s not quite true; the Turks and Qataris imagine liberal, integrated-with-the-West-style Islamic democracy coming to a post-Assad Syria…which just goes to show what vivid imaginations they have.)

The bottom line is that due to the exposure of false-flag operations, the foreign-backed rebels have lost. The war is over.

And the 9/11 truth movement, which has done so much to make the term “false flag” part of the world’s common vocabulary, deserves much of the credit.