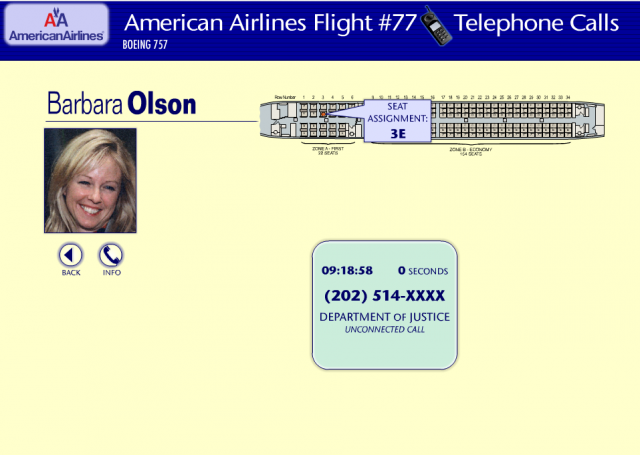 The Malaysian newspaper New Straits Times reports that Abdul Hamid “made a desperate call from his mobile phone as the plane was flying low near Penang, the morning it went missing.” The brief connection was only possible, experts say, because the plane had “dropped to as low as 5,000 feet” as it flew northwest of Penang. Even at that extremely low altitude, it appears that Abdul Hamid’s attempted call did not go through. It was cut off “because the aircraft was fast moving away from the tower and had not come under the coverage of the next one.”

Experts cited by the New Straits Times and the London Daily Mail confirm that the absolute altitude limit for making even a brief cell phone connection from an airliner is about 7,000 feet. But that does not mean that a passenger could carry on a conversation from that altitude. As the experts suggest, airliners travel too fast for calls to be handed off from one cell tower to another.

Unless the plane has special equipment developed during the past few years (and MH370 did not) it is impossible to have a cell phone conversation from an airliner at even a few thousand feet of elevation. Below 7,000 feet, one could dial a number and, with luck, get a brief connection to a cell tower – but that connection would drop before the call could be put through and answered.

That is what happened to Fariq Abdul Hamid’s attempt to make a cell phone call from missing Flight MH370.

And yet we were told that on September 11, 2001, passengers on hijacked flights also made “desperate calls” and somehow engaged in long cell phone conversations with people on the ground!

For many years, the US government and mainstream media reported that at least fifteen cell phone calls had been placed from the allegedly hijacked airliners flying at over 30,000 feet. These reports began with the claims of Bush administration Solicitor General Ted Olson, who told CNN that his wife, right-wing commentator Barbara Olson, had “called twice on a cell phone” from allegedly-hijacked Flight 77 – the flight that supposedly hit the Pentagon. Olson said the first call from his wife lasted “about one minute” and the second call “two or three or four minutes.”

According to Ted Olson, his wife told him that “all passengers and flight personnel were herded to the back of the plane” by hijackers armed with “cardboard knives and box cutters.”

The story is fantastic. The alleged hijackers were barely five-and-one-half feet tall, and weighed in the low 100 pounds range. The pilot, Chip Burlingame, was a large, muscular, military-trained weight lifter and boxer. Yet, he supposedly gave up his pilot’s seat, failed to take a few seconds to squawk the hijack code, and shambled meekly to the back of the plane at the orders of four small men carrying implements for opening packages – none of whom could even fly Cessnas.

Unsurprisingly, the calls reported by Ted Olson could not possibly have happened. One of North America’s most notable scientists, Dr. A.K. Dewdney, proved in a series of experiments in 2003 that cell phone conversations from airliners would be extremely unlikely above 1,000 feet. Dewdney found that the maximum altitude for getting even the briefest cell phone connection was 7,000 feet – the same altitude cited by the Straits Times and London Daily Mail as the absolute limit for cell connections.

Yet, while Olson was supposedly talking to his wife on the “hijacked” plane, Flight 77 was, according to the official flight path, cruising at 35,000 feet! The plane said to be Flight 77 did not descend to 7,000 feet until 9:29 a.m., just a few minutes before the first explosion at the Pentagon.

The claim that Barbara Olson called her Bush administration husband from hijacked Flight 77 is not just false; it is preposterous.

The FBI agrees. It confirmed in 2006 that the only call from Barbara Olson’s cell phone on 9/11 was a failed attempt that lasted “0 seconds.”

The FBI now officially admits that, of the fifteen alleged 9/11 cell phone calls, thirteen never happened. It says that there were only two such calls, both placed from Flight 93 shortly before it crashed (or was shot down).

The FBI should arrest Ted Olson for obstruction of justice. It should track down and arrest those who created the bogus 9/11 cell phone reports. And it should arrest Cheney, Bush, Rumsfeld, Wolfowitz, Perle, Feith, Libby, Chertoff, Mukasey, Hauer, Myers, Zakheim and the other perpetrators of the 9/11 false flag event.

But to do that, it will have to break up the biggest organized crime ring in America: “The cabal.” That is the name prominent American financier Mark Gorton gives to the loose-knit group behind the murders of the Kennedies, Martin Luther King, Senator Paul Wellstone, and hundreds of other Americans, as well as the Oklahoma City and World Trade Center bombings.

Gorton is a wealthy, respected, reportedly brilliant American businessman who just shocked observers by publishing three works-in-progress entitled “Fifty Years of the Deep State,” “The Coup of ’63” and “The Political Dominance of the Cabal.” Taken together, these three works synthesize and condense much of the best research on American false flag events and political assassinations. Gorton’s essays reveal “a hidden history of America with corruption so profound and scary that it shocks the sensibilities of most Americans and drives the mainstream press to seek comfort in official government lies.”

The media propaganda machine, dominated by the cabal Gorton exposes, is already attacking Gorton as a crazy conspiracy theorist. But even anti-conspiracist website Gawker.com calls Gorton a genius and admits: “Mark Gorton does not have a reputation as a crackpot. Quite the opposite. He’s been favorably profiled in the New York Times for his business acumen and charitable deeds.”

Gorton is understandably concerned about his personal safety. In “Fifty Years of the Deep State,” he writes about the “Post 9/11 Death Squads” that have killed numerous witnesses and a few politicians, plaintiffs, lawyers, and journalists. Among the dead 9/11 witnesses are Katherine Smith, Dr. David Graham, Kenneth Johannemann, Bertha Champagne and Barry Jennings. Those murdered to derail 9/11 truth lawsuits include Beverly Eckert and Michael Doran. Journalists who may have been killed by the 9/11 clean-up team include Hunter S. Thompson and Philip Marshall.

Gorton’s essays should be required reading for every American. They are well-documented, and include bibliographies listing many of the best works on the American deep state.

Gorton’s articles, and the research on which they are based, raise a troubling question:

Did the cabal steal MH370 using remote hijacking, disinformation, and war games that suddenly go live – the same techniques it employed to steal America on September 11, 2001?