Home Life CIA has blood on hands in Ukraine: Analyst 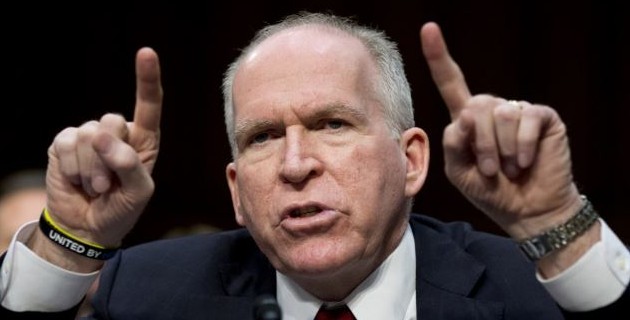 CIA has blood on hands in Ukraine: Analyst

[ Note:  Press TV, from time to time runs a news story on a Viewpoints commentary that has rolled off the front page “Latest News” section in their upper right hand corner.

Because we often get posted in the early morning hours here, new stories have rolled us off the front page before Americans wake up.

So Press TV experimented with doing “a story on a story”… a news article on a commentary that they would run doing the day to try to put some more readership wind in the sails of what they felt was a good piece that needed more exposure. It has worked like gangbusters.

A lot of news readers don’t click out of the front page into the Viewpoints section. Similarly, we have long time VT readers  who have never been to the editorial board and staff page to see our crew, which is one of the most interesting pages on VT.

You have to click on the title bar tab to get there, and as you know, we are a visually-competitive front page. Once you have scrolled down a bit, you don’t even see that tab anymore.

We call these news stories on a commentary a “double pump.” We never would have dreamed that some would break over 1000 Facebooks and even rank up in the top daily story section. In fact, with the stellar month we are having at Press TV, Kevin and Gordon have all six of the top read monthly stories slots, and one of them is a double pump on one of Kevin’s blockbusters.

It is unprecedented in the history of  journalism that commentary material could surpass even the major news stories, although ours are really a hybrid of news and commentary. I share this with you today as this success did not happen in void. We have seen cross-platform VT readership in our Press TV comment boards where the audience is more international. The cross pollination has been a benefit to all.

But our being part of VT is a major part of our draw there, and you readers have made a major contribution to that, and we thank you for it. We are actually beating corporate print media on readership in our niche areas. They used to laugh at alternative media… but look who’s laughing now… Jim W. Dean ]

The revelation of CIA Director John Brennan’s visit to Ukraine is proof of the US intelligence agency’s involvement in March’s coup, an analyst writes in a column for the Press TV website.

Jim W. Dean’s column on Tuesday was in reaction to the White House’s confirmation of CIA chief’s visit to Kiev on Monday.

“The Kiev coup-meisters had to have made Brennan aware of their plans, and he was smart enough to realize that if they carried through with deploying military forces against the referendum cities, then all eyes would be on his visit as playing a key role,” wrote the analyst.

He said the putchists in Ukraine “must have had CIA endorsement of their action.”

“Both the coup-meisters and the US State Department are joined at the hip on who has made the biggest fools of themselves,” wrote Dean.

He said the CIA boss had met with “a good number of senior coup members and the top security people” during his secret visit. The White House said Brennan’s visit to Kiev was “part of a trip to Europe”, adding, “We don’t normally comment on the CIA director’s travel.”

Ukrainian deposed President Viktor Yanukovych said on Sunday that the CIA is provoking bloodshed in the country by sanctioning the use of weapons against pro-Russia protesters.

Political crisis erupted in Ukraine in November 2013, when Yanukovych refrained from signing an Association Agreement with the EU in favor of closer ties with Russia.