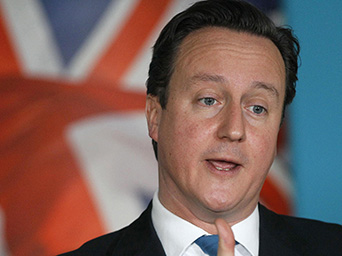 But don’t expect him to unblock the Holy Land sewer

Over the Easter holidays the UK’s prime minister, David Cameron, was on his knees “doing God” in the run-up to European elections. And he sparked a great commotion in the media by claiming Britain is “a Christian country”.

Cameron wrote in the Church Times http://www.churchtimes.co.uk/articles/2014/17-april/comment/opinion/my-faith-in-the-church-of-england : “I believe we should be more confident about our status as a Christian country…. more evangelical about a faith that compels us to get out there and make a difference to people’s lives.” Belief in Christianity, he said, could inspire us to change people’s lives and improve both the spiritual, physical, and moral state of the world.

He has certainly helped make a big difference to people’s lives across the globe.  Cameron was among those who stupidly voted for war with Iraq, which caused mega-death and destruction, shredded the lives of everyone there and wrecked their ancient civilisation. He went on the prod in Libya with generally disastrous consequences for its people. He was itching to bomb Syria but, mercifully, Parliament stopped him.  And he has inflicted vicious sanctions on the Iranians, with the intention of ruining their economy, for no  reason except Israel and America wished it. Now he wants to mix it with the Russians without knowing the facts.

And at home his bizarre social policies have alienated large sections of the population.

In his article he went on to say: “I am a member of the Church of England, and, I suspect, a rather classic one: not that regular in attendance, and a bit vague on some of the more difficult parts of the faith.”

He’s more than a bit vague, he’s very confused, because he also calls himself a Zionist and only a few weeks ago was emphasising his Jewish roots.  Christian-Zionism is surely a contradiction in terms. When you consider the political aims and brutal methods of Zionism, which have turned the Holy Land into the world’s longest running horror show, you have to wonder what values and beliefs Christians could possibly share with Zionists. Was it Christian charity that drove Cameron to legislate a change in our laws of universal jurisdiction and provide shelter and comfort to Zionists wanted for war crimes?

Instead of stopping digging, Cameron proceeded to made the hole for himself even bigger by telling  his Easter reception guests in Downing Street http://www.independent.co.uk/news/uk/politics/david-cameron-claims-jesus-invented-the-big-society–he-is-just-continuing-gods-work-9250449.html : “It is the case that Christians are now the most persecuted religion around the world. We should stand up against persecution of Christians and other faith groups wherever and whenever we can.”

I can hear you shouting back that nowhere is that persecution more enthusiastically inflicted and more keenly felt – by Christian and Muslim alike – than in Occupied Palestine. The perpetrator, of course, is the Zionist regime in Tel Aviv to which Cameron is so strangely devoted.

As reported by The Independent, Cameron offered to help the Church keep up its commitments to Jesus’s “Big Society” (a concept he had borrowed to showcase his ideological schemes) by likening himself to a market-leading company that unblocks drains. “If there are things that are stopping you from doing more, think of me as a giant Dyno-Rod,” he said.

How very prime ministerial. A pity he doesn’t at least try to dyno-rod the Israelis out of the illegally occupied Palestinian territories, drain the evil swamp they created, free the people and give the Holy Land a chance to breathe, prosper and smell sweet again. But of course he won’t. He ain’t really that Christian.

Cameron’s utterances provoked a sharp reaction and feverish debate throughout the UK’s media, led by a letter in the Daily Telegraph signed by a long list of people whose names mean nothing to the man on the Clapham omnibus. They complained: “We object to his [Cameron’s] characterisation of Britain as a ‘Christian country’ and the negative consequences for politics and society that this engenders…. Britain is not a ‘Christian country’. Repeated surveys, polls and studies show that most of us as individuals are not Christian in our beliefs or our religious identities.

“At a social level, Britain has been shaped for the better by many pre-Christian, non-Christian, and post-Christian forces. We are a plural society…. and we are a largely non-religious society. Constantly to claim otherwise fosters alienation and division in our society.” They added that the contribution by Christians to Britain had been equalled by people of different beliefs.

A load of tosh, in my humble opinion. On this one pont I agree with Dyno-Rod Dave: the majority are still Christian. One problem is the Church. Its ineffectual leaders have made it almost irrelevant. They seldom speak up loud and clear about the human condition and the tyrrany of our corrupted politics, even though they have 26 seats in the House of Lords. They have become as despised as the rotten politicians themselves.

The other problem is Cameron’s government. Like most of its predecessors it does not behave like a Christian government. Rather than obey the laws of God it bows to the vile dictates of neocons in Washington and crackpot Zionists in Tel Aviv.

As for the non-Christians who come to live here, they do so knowing this country for what it is – Christian with a long, long tradition, littered with monuments to the faith. The Queen is that faith’s “Defender”. They should respect it. If I were to go live in a Muslim country I would of course acknowledge the dominant faith and traditions and not seek to weaken them. If invited eventually  to participate in that country’s administration or government I would do so respectfully. I expect those we welcome to the UK to show the same courtesy.

Time was, when immigrants came as ‘supplicants’. And that’s the way it should be, no matter whose country they seek to enter and make their home.

God’s co-workers, or the devil’s slackers?

And what was that other leading Christian with Jewish ancestry, Justin Welby, Archbishop of Canterbury, saying during Holy Week? In his Ecumenical Easter letter the Archbishop wrote: “Looking at the world during these times of growing conflict and the challenges of a changing context, we are acutely aware of a sense of helplessness.” He mentioned South Sudan at length where nearly 900,000 people have already been forced from their homes.

“We are aware of the continuing traumatic experiences of Christians and other suffering people, particularly in the Middle East. Religious freedom is being curbed in many parts of the world and human rights trampled upon….” He didn’t elaborate, nor did he mention Palestine where the Easter event he was commemorating actually took place.  The Israelis as usual were preventing many local Christians from celebrating it freely. And Welby failed to mention the millions of Palestinians still languishing, stateless, in filthy refugee slums after being expelled decades ago from their homeland where Christianity was born.

Yet he had the gall to say: “As Christians we take courage from the victory won in the resurrection of our Lord and Saviour Jesus Christ….  God has given Christ all dominion, power and authority and has through Christ raised and made us his co-workers. Through him dividing walls of hostility between people are broken down. Through him there is a new humanity, a new reality. With him we will be knitted together into one body. Principalities and powers of this world will be called to reason and obedience to God, not in a struggle for power but for truth.” http://www.archbishopofcanterbury.org/articles.php/5299/archbishop-justins-ecumenical-easter-letter#sthash.Q9Vq5Kf9.dpuf

Fancy words. Tell them to the people of the Holy Land, Archbishop. Did you underline those points when you visited Israel?

At the same time the Israeli authorities were busy setting up obstacles to prevent Christians reaching Jerusalem’s holy sites, notable the Church of the Holy Sepulchre. Even UN envoy Robert Serry found his way blocked. As this and similar curbs on religious worship are an ongoing problem with the Jewish state you’d think Welby would make an issue of it.

Am I writing this as a religious fanatic? Well, you’ll seldom catch me in a church except to admire the architecture and to let the stones speak to me of the soaring faith of earlier generations. The men of God one can look up to are precious few. So people like me broadly follow Christian teaching as a code of conduct because that’s the way we were brought up and it seems an OK system for day-to-day living.

In my case I’ll also adopt codes from the Muslim faith. I’d like to see someone merge the best of the two and provide a programme to instil human decency that could be taught in all schools.

Maybe it will happen one day.