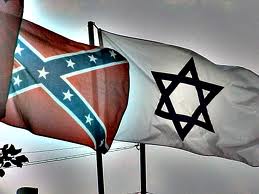 According to unconfirmed reports, Donald Sterling has traveled to Bunkerville, Nevada for a meeting with rancher Cliven Bundy. Their agenda: The creation of a new Racist/Jewish State on BLM land. The project would, for the first time in history, unite Jewish and goyish racists in a single apartheid state.

“That thar BLM land is a land without people,” Bundy explained, “and us racists is a people without land. So let’s all of us who don’t like neegras and goys and such make aliyah. I’ll betchya we can make that gosh-durned desert bloom.”

Sterling expressed cautious optimism about the project. “It could turn out to be even better than Israel,” the LA Clippers owner said. “After all, Israel still has a few darkies – both the shvartzers from Ethiopia and those sand neegras they call Philisteenians that we’re trying to eradicate. But the only dark skin on this BLM land is the hide on Bundy’s cattle.”

According to a joint statement issued by Bundy and Sterling, the new  nation will be called White Zion. Bundy expressed hopes that a new genetically-engineered species of cotton-producing sagebrush would open up possibilities for a neo-plantation economy, with the labor provided by slaves captured in raids on Los Angeles, Oakland, and other West Coast metropolitan areas. Sterling added that the plantations could start out by using his basketball players.

Sterling explained that a new Racist/Jewish State in Nevada might turn out to be easier to establish than the older racist Jewish state in Palestine. “Palestine was owned by the Ottomans and infested with sand neegras when we got there,” he explained. “We had to arrange for some really big wars to clear it out. But this part of Nevada is just empty, wide-open desert. The only war we’ll have to fight is with the BLM – and those guys aren’t even a match for a hundred militiamen.”

But is White Zion politically feasible? “I don’t see why not,” Sterling said. “We can count on the support of Sheldon Adelson, who already owns urban Nevada – not to mention the whole Republican Party. Sheldon has shown that he’s willing to put his hundreds of billions of money-laundered dollars at the service of a racist Jewish state. So why not start a Racist/Jewish State right in his own backyard?”

“As a Jewish racist, I can tell you that racists are persecuted even more than Jews in today’s world,” Sterling added. “I’ve been running around making no secret of my Jewishness for decades, and nobody even blinked. But the minute I let out I’m a racist, the whole world turns against me. So obviously we racists, even more than Jews, need an apartheid state bristling with nuclear weapons to protect us from a hostile world.”

Sterling expressed confidence that White Zion will soon become a nuclear power: “If the Jewish racist state could steal the makings of hundreds of nuclear weapons from the US and cart all that stuff to the other side of the world, how hard could it be to steal a few more nukes and haul them to rural Nevada?”

Secretary of State John Kerry, interviewed while under the influence of sodium pentothal, expressed reservations about the White Zion project: “The world already has one racist Jewish state. Does it really need another?”

President Obama, administered an even higher dose of truth serum, opined that sending all the world’s racists to rural Nevada – starting with Sterling, Bundy, Adelson, and Netanyahu, and continuing with the 95% of Jewish Israelis who approved of Operation Cast Lead – might not be such a bad idea.