I attended the University of Wisconsin from 1976 through 1981. During that period, the sexual assault rate had begun to skyrocket – though it was still far lower then than it is now.

Those years saw the outbreak of three pernicious diseases: AIDS, Reaganism, and feminism. All three were blowback from the 1960s sexual revolution.

The feminists (whose movement was created and funded by the New World Order, as Nick Rockefeller famously admitted) were understandably horrified by the rising rate of sexual assault – and the accompanying epidemic of pornography. But they didn’t understand that all this came from the breakdown of the family via the separation of sexuality from the reproductive unit. (Sexuality cut loose from reproduction quickly leads to Sodom, Gomorrah, and Abu Ghraib.)  So they fought against “patriarchy” – the natural role of the male as head of the family – and contributed to the confusion and family breakdown that has produced epidemic levels of STDs, emasculated, irresponsible males, and moral degeneracy – the kind of culture that would bend over for the 9/11 inside job.

Reaganism was another kind of blowback. Reagan symbolized the Ozzie and Harriet values that mainstream America correctly sensed were being lost, which is why so many voted for him. But his policies led to the enshrinement of selfishness, greed, and plutocracy. Reagan accelerated, rather than halted, America’s moral breakdown.

The underlying cause of this decline in family values (including treating ones fellow citizens as family) is the progressive loss of religion. Quoting from my forthcoming book Defending the Sacred:

When I was born a little over 50 years ago, few Americans doubted that religion deserved special protection, and that religious beliefs about the sanctity of life and property were a major source, if not the major source, of both legislation and social convention. Religiously-based legislation of sexual morality and decency, the prohibition of blasphemy, and tax breaks for churches were taken for granted; divorce and childbirth out of wedlock were stigmatized and very rare, with the result that violent crime, suicide, drug abuse, and child poverty rates were very low; abortion was everywhere illegal and almost universally despised; and drugs and alcohol were regulated in accord with religious belief (for example, by prohibitions of the sale of alcohol on Sunday, the Christian holy day). Today, all of the above features of pre-1960s American society would be decried by the radical secularists who have seized power in the West as symptoms of massive and systematic discrimination in favor of religious believers against non-believers.

The Islamic world is resisting the New World Order’s destruction of religious-based family values. Dr. Javed Jamil’s book Muslims Most Civilized, Yet Not Civilised Enough offers extensive statistical analysis showing that the rate of negative social indicators – including murders, assaults, rapes, suicide, alcoholism, drug addiction, divorce and family breakdown, crime, domestic violence, and STDs – is significantly lower among Muslim than non-Muslim populations. It is the intensity of religiosity in Muslim societies that protects them from these horrors.

No wonder the New World Order – which seeks to weaken populations so they cannot resist the coming one-world tyranny – staged 9/11 to launch its war on Islam. 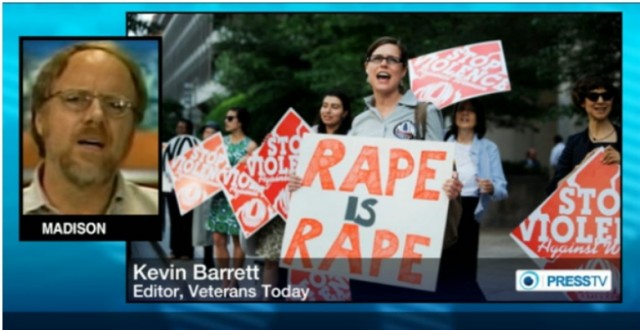 Sex assaults at US colleges stem from cultural decline

A journalist and former University lecturer has criticized US college campuses as “notorious” for sexual assaults that have become as an epidemic at education centers across the United States.

In an interview with Press TV, Kevin Barrett said the sexual assaults stem from America’s “cultural and moral decline.”

Widespread sexual crimes are “a very real problem in American culture,” he said from Madison, Wisconsin.

“American college campuses are notorious for the alcohol abuse, drug abuse and subsequent problems, including sexual assaults that are prevalent in so many campuses,” Barrett said.

The US needs to take a hard look at its culture because moral and family values have changed for the worst during the past few generations, he added.

US Vice President Joe Biden on Tuesday called for an end to sexual assaults at colleges and universities and said “we are never going to solve this epidemic until we get men involved.”

Biden announced the release of the first report of the White House Task Force to Protect Students from Sexual Assault.

In January, President Barack Obama established a task force to release the report in order to help identify ways to protect students from sexual violence. The White House report said one in five women is sexually assaulted while attending college, most often in her first or second year of study.

However, Barrett noted, “the vice president giving a lecture to young college men is not going to have any effect, whatsoever, on this problem.”

“The only way that we’re ever going to change this is by returning to a more traditional and dare I say religious culture, in which the natural family values that have been in place in almost all cultures throughout almost all of history are returned.”