Home World Is UKIP the ‘White Knight’ of British Politics 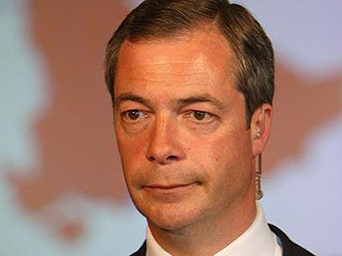 Is UKIP the ‘white knight’ of British politics or just another mercenary of the pro-Israel Lobby?

UKIP (UK Independence Party) is poised to cause an earthquake in British politics at the European elections on 22 May. The mainstream parties – Conservatives, Labour and Liberal Democrats – are panicking as they watch UKIP surge ahead in the polls.

So much so that they are reported to be conspiring to brand UKIP racist.

If UKIP’s leader, Nigel Farage, is smart he’ll turn the tables and throw the spotlight on the three parties’ avid support for the racist Israeli regime and its apartheid policies that have terrorised, tormented and dispossessed the Arab Christians and Muslims in the Holy Land throughout the 66 years of brutal occupation. He could expose the many MPs who actively support this criminal cruelty through their membership of Friends of Israel groups that are allowed to flourish in those parties.

However, UKIP now has its own Israel fan club, an unseemly blot on any white knight’s escutcheon.  But Farage, if not already compromised by Israel lobby funds, should shut it down and hold up his action as a shining example, challenging the others to follow. Of course they will not, or cannot, because they rely so heavily on funding from the same source and are terrified of the backlash. Their paralysis could therefore give UKIP the moral high ground. At the same time UKIP would earn the respect of the rapidly growing BDS movement (Boycott, Divestment and Sanctions), whose campaign against corporates that profit from the Occupation are having considerable success.

Some 80% of Conservative MPs/MEPs are reported (by Peter Oborne  http://www.telegraph.co.uk/news/worldnews/middleeast/israel/9740044/The-cowardice-at-the-heart-of-our-relationship-with-Israel.html ) to be signed-up Friends of Israel, which raises the question, Why? Anything to do with Israel Lobby funding? If so how can we rely on them to put British interests first?

It is also said that membership of FoI is an essential stepping-stone to high office. This seems to be confirmed when you look at the involvement in FoI of the Government’s top post-holders.

The BDS movement boycotts certain products in order to teach the corporations a lesson in ethics. MPs, MEPs and parliamentary candidates who wave the Occupier’s flag may be next on the BDS target lists. After all, they are the product of their parties. They go through a ‘remanufacturing’ process involving rigorous selection procedures and training to ensure compliance with party diktat. Remember how, last year, MP David Ward was recalled by the Liberal Democrat factory for re-education and reprogramming after exhibiting a “language” fault?

But the idea that UKIP can combat the many accusations of far-right extremism by bolstering support for Israel, as claimed on the foi-ukip website, is not only ludicrous but offensive to the Christian and Muslim communities who live a life of misery under the Israeli jackboot and to anyone who has bothered to go see the truth for themselves.

Freed from the EU only to be chained to Israel

I’m unable to find a link on UKIP’s website to the party’s current foreign policy document. In last year’s policy statement ‘Out of the EU, into the world’ www.ukip.org/media/policies/UKIPforeignaffairs.pdf (but no longer accessible) UKIP was saying it “fully supports the right of Israel to exist as a Jewish state… Israel is surrounded by hostile states committed to its destruction. The tiny state has been the frequent victim of rocket attacks and suicide bombings from terrorist groups, almost all deliberately targeting civilians. Israel has every right to respond with proportionate force to these attacks, and a UKIP government would do the same were Britain similarly threatened.”

Ridiculous. Britain is not illegally occupying, blockading, dispossessing and committing war crimes against its neighbour, so where is the comparison?

The policy document continued: “UKIP rejects the notion that Israel should be punished through sanctions or cancellation of trade deals (such as the EU-Israel Association Agreement) for defending itself from attack.”

The document contained no acknowledgement that the Palestinians had suffered illegal occupation, dispossession and ethnic cleansing for the last 65 years and they too are entitled to defend themselves. UKIP didn’t even mention law and justice as the path to a solution, didn’t demand due process, didn’t call for an end to the illegal occupation of the West Bank and the vicious blockade of Gaza, didn’t note Israel’s imprisonment and torture of children, and didn’t require compliance with the countless UN resolutions. They seemed quite happy for the oppressor to carry on holding a gun to the head of the oppressed, with no prospect of a just peace.

The collapse of the latest peace talks in disarray, and the reasons for it, must surely tell UKIP leaders something.

The same policy document said UKIP believed a nuclear Iran would be unacceptable and would support “military means” to eliminate its nuclear weapons capability. UKIP seemed indifferent to the fact that Israel possesses hundreds of nuclear warheads (and the means to deliver them), menaces the whole region and defies all calls to sign up to the Nuclear Non-Proliferation Treaty and place all its nuclear facilities under comprehensive IAEA safeguards.

Also, UKIP has rejected calls for the suspension of special trade privileges such as the EU-Israel Association Agreement. What part of Article 2 of the EU-Israel Association Agreement does UKIP not understand? The purpose of the Agreement is to promote (1) peace and security, (2) shared prosperity through, for example, the creation of a free trade zone, and (3) cross-cultural rapprochement. It governs not only EU-Israel relations but Israel’s relations with the EU’s other Mediterranean partners, including the Palestinian National Authority. To enjoy the Association’s privileges Israel undertook to show “respect for human rights and democratic principles” as set out as a general condition in Article 2, which says: “Relations between the Parties, as well as all the provisions of the Agreement itself, shall be based on respect for human rights and democratic principles, which guides their internal and international policy and constitutes an essential element of this Agreement.”

“Essential” is the operative word. Respect for human rights and democratic principles is not optional. Article 2 allows steps to be taken to enforce the contractual obligations regarding human rights and to dissuade partners from pursuing policies and practices that disrespect those rights. The Agreement also requires respect for self-determination of peoples and fundamental freedoms for all.

Given Israel’s contempt for such principles, honourable politicians would have enforced Article 2 and not let matters slide. They would have suspended Israel’s membership until the regime fully complied.  Israel relies heavily on exports to Europe so the EU could by now have forced an end to the brutal occupation of the Holy Land instead of always rewarding it.

UKIP’s perverse leadership claims to put Britain first but has decided that the party needs a ‘Friends of Israel’ fan club, and Nigel Farage has been described by the Jewish Chronicle as “a good friend of Israel”. The objectives of UKIP’s FoI include organising delegations to Israel; ensuring that UKIP has “a fully informed” foreign policy; providing UKIP’s elected representatives with information relevant to Britain and Israel’s mutual security concerns; and ensuring Israel gets a fair hearing in all forums in which UKIP is represented. In other words UKIP, or at least those members who participate in its Israel admiration society, are expected to act as agents for that belligerent foreign power.

Perhaps that is why their foreign policy document is now hidden. But there is no point in UKIP freeing us from the unelected wasters of the EU only to shackle us to the hateful warmongers in TelAviv.

If UKIP are still unconvinced about Israel’s apartheid tendencies they should read this….
http://www.independent.co.uk/news/world/middle-east/the-new-israeli-apartheid-poll-reveals-widespread-jewish-support-for-policy-of-discrimination-against-arab-minority-8223548.html . And they should carefully consider what being a Friend of Israel makes them look like.

So when ‘Sir Nigel’ rides forth to rescue the fair damsel Britannia from her EU prison tower, he should consider what an unknightly deed it would be to sell her into harlotry for a foreign racist enterprise.