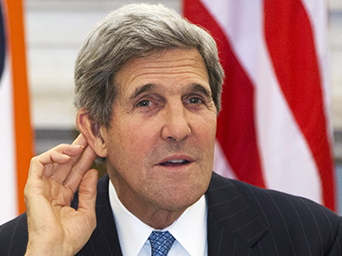 Mr. John Kerry, the Secretary of State, rather than retreating and bunkering down in the face of attacks by AIPAC and Israeli attack dogs and allies, should pause, muster all the courage he have or once had and simply just say it “ Israel is an Apartheid State”.

But then Israel is already an “apartheid” state with two separate and unequal legal and judicial systems. One for Jews and one for Arabs. Israelis Jews get away with murder when they kill Arabs while an Arab goes to jail for throwing a “ stone”.

Arab homes are demolished and bulldozed if member of the family commit an offense against an Israeli, while Israelis can kill and murder an Arab and the state does not bulldoze or demolish his/her house.

Jews can take over Palestinian properties with impunity, without warrant, without due process, without legal basis, using only their M-16s and fraudulent deed, only because they are Israeli Jews and settlers. Arabs will be shot and killed on the spot if they dare to do the same.

There are so many segregated roads” Jews only” denied to Arabs to use even if these run through their village.  Arabs are locked down during “Jewish” holidays while criminal settlers are allowed to roam all over the place during Muslims and Christian holidays, burning and uprooting trees, defacing mosques and churches.

Israeli Jews are allowed to build homes as they chose benefiting from a system that totally favor Jews while Palestinians have to wait years and years to get a permit to add one room to an existing house. Demolition orders for Arab homes take immediate effect with no recourse while evacuating of “illegal” settlements takes years to carry out.

It is segregations and “apartheid” all over the place, in residence “Jewish only towns”, in travel, in access to public facilities and in schools. The only thing missing are signs “Jews only” and “Arabs only” for buses, for parking, for public toilets. If this is not “apartheid” I do not know one can call it !

John Kerry a fellow veteran and contrary to his distractors in the “Swift Boat” is war veterans with proven courage in the battlefields of Vietnam, and was courageous when he joined the Peace movement calling for US withdrawal from Vietnam, should recover his courage and stand up for what he believes.

Do not understand why every one is jumping on his back when key Israeli leaders have said before and warned that Israel, if no peace agreement is reached based on a Two State Solution will in fact become an Apartheid State similar to South Africa with two types of citizens, first and second class.

Of course there are powerful forces in Israel, certainly in the US that stand against any “peaceful” settlements no matter what the Palestinian leadership of Mahmoud Abbas gave away in Oslo and ready to concedes in any final solution. Israel and its supporters want the land, without the people and want peace as a bonus.

So why every one is jumping on the back of John Kerry when Israeli leaders like Ehud Olmert, Ehud Barak and Tizipi Livni all said it before?

Because Israel and its Fifth Column in the US know that NO US political leader whether elected, or appointed have the courage, the backbone to stand up for what they believe in and dare to speak out against Israel’s policies and practices certainly it chocking hold on US domestic (economic, financial and security) policies and issues, certainly on our Middle East policy.

Here is what the Israeli leaders said about Israel and Apartheid

“
• 2007 — then-Israeli Prime Minister Ehud Olmert: “If the day comes when the two-state solution collapses, and we face a South African-style struggle for equal voting rights (also for the Palestinians in the territories), then, as soon as that happens, the State of Israel is finished.”
• 2010 — then-Israeli Defense Minister and Former Prime Minister Ehud Barak: “The simple truth is, if there is one state” including Israel, the West Bank and Gaza, “it will have to be either binational or undemocratic. … if this bloc of millions of Palestinians cannot vote, that will be an apartheid state.”
• 2013 — Israeli Justice Minister and Lead Peace Negotiator Tzipi Livni: “But the time has come for the same youth to ask, to what kind of state do they want to leave the gas reserves? To a Jewish democratic Israel? Or to a binational Arab state? Or to an apartheid state? It is impossible to deal with economic issues and to ignore the important diplomatic issues related to two states for two peoples.”

Time for President Obama and his team to stand up for the truth and for what is right and publicly address the nation and tell it like it is. That Israel and its allies in the US are the one standing in the way of peace in the Middle East.

America, the world, Israel, the Palestinians certainly the Arabs know that America under this administration and all past administrations was never an honest broker and was never a true peace maker. It always stood by Israel “right and wrong” and as such it is unfit and unqualified to be the peace maker.

Perhaps this is the first opportunity for President Obama and Secretary of State John Kerry to right what has been wrong for a long time. Face the nation and speak the truth without fear of retaliation from AIPAC and Israel’s attack dogs, and let the American people judge for themselves. Nothing wrong with that!