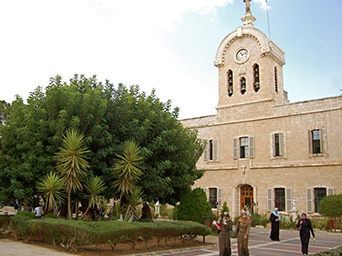 Israeli troops shelled the old one

Bethlehem University is a very special place which I have been fortunate to visit several times. Described by its Vice-Chancellor as “an oasis of peace and a beacon of hope”, I found it a warmly-welcoming, vibrant melting-pot of Christian and Muslim giving off endlessly good vibes.

The University’s latest newsletter arrived today with this important announcement: “Bethlehem University is on the cusp of some major developments. The library renovation is the first important step in a comprehensive facility master plan that will shape the University over the next 40 years and beyond. The renovation will transform one of the oldest buildings on campus into the heart of our intellectual and community life.

“The state-of-the-art ‘green’ features and modern design will foster collaboration among students, faculty, and the region while easing the stress of living under military occupation.”

Bravo. The University has been a target for senseless destruction by the Israeli military and was closed twelve times on military orders, the longest being for three years from October 1987 until October 1990. In the book ‘Radio Free Palestine’ http://www.radiofreepalestine.org.uk/ I wrote:

The University was founded in 1973 by the De La Salle Christian Brothers at the request of Pope Paul VI. Three Brothers from the USA and 12 Palestinian educators opened the doors to 112 students in the beautiful 1893 high school building belonging to the Brothers. In March 2002 the University was hit by four Israeli anti-tank missiles – three smashed into the multi-million dollar Millennium Hall complex, which featured state-of-the-art classrooms and laboratories and had been dedicated only the year before, and one into the Heritage Centre in the Library, destroying 200 books.

A month later the campus was invaded in the early hours of the morning by 100 Israeli troops, who then commandeered it for their barracks, despite the fact that as a religious and educational institution the University was supposed to be protected from military incursion by international law. Every building on the campus was damaged, with an estimated repair bill well over $100,000…. Father Cyril, a mild-mannered man from Minnesota, USA, showed us round. He was due to go on leave. “What do your friends back home say when you tell them what’s happened here?” I asked. He shrugged. “They listen for ten minutes then switch off.”

“This is a view of the wall of Bethlehem University’s Library which is located at the main entrance of the University campus. If you look closely in the first photo – on the second floor, on the wall between the two rectangular windows – you can see what appears to be a small circular window. Bro. Jack told me that this “circular window” is in fact a hole in the wall of the University’s library that came about during the 40 day Israeli siege of the Nativity Church during March 2002 – and it is the spot where one of four missiles struck this Vatican sponsored Catholic university in the Holy Land.

“The University decided not to completely repair this missile hole, but to place a glass cover over it since the room inside the library where this missile hit is the Palestinian Cultural Heritage Center (Turathuna). Consequently, this missile hole is now an additional piece of the cultural heritage of the Palestinian people. The second photo shows a close-up. The shell/rocket did considerable damage, traveling through, if you will, 12 book stacks and metal shelving.”

Today Bethlehem University has nearly 3,300 students, 71% Muslim to 29% Christian. And the women outnumber the men three to one.

Those in the West who hesitate to boycott Israeli universities and academic institutions for fear of being accused of de-legitimizing Israel, need only remember this. The Israelis have no respect for other people’s right to education and, in the Palestinians’ case, do everything to obstruct it. They have de-legitimized themselves.