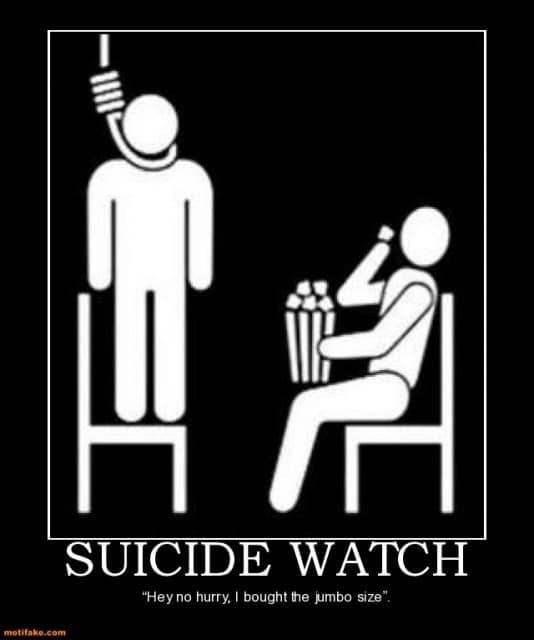 American military veterans are dying in numbers unimagined.  The numbers themselves are hidden from the public just like the waiting lists from the Department of Veterans Affairs.  There is a reason for this, the two are related.  Waiting lists, weeks or months for treatment for devastating and debilitating illnesses and conditions, destroyed records, “wiped” computers, SWAT teams with automatic weapons prowling the hallways of clinics, these are the real reasons vets kill themselves.
Most veterans who have chosen suicide have been abused and mistreated by the Department of Veterans Affairs.  Some have been told that their illnesses or wounds are imaginary, others are shuffled into endless bureaucratic loops and most are subjected to the Kafkaesque disability compensation system where literally anything can happen and does.
Russia Today reports that veteran suicides in the US have topped 100,000.  This isn’t “all vets” but only younger vets during the post 9/11 period.  Many felt this number was outrageous but a careful statistical analysis of figures supplied by the Bureau of Census proved it to be low, perhaps 40% low.
The dilatants of the mainstream press, this being an election year, have mysteriously discovered that the Department of Veterans Affairs lies, cheat and steals.  The CNN story, outlining schedule falsifications in Phoenix is, perhaps, the least offensive of hundreds of scandals the VA has been involved in since the beginning of time.  However, to get the facts straight, the VA began murdering vets as a matter of policy under the “W” Bush administration.
They became experts at patient abuse, at shuffling patients, lying, bullying and “misplacing.”  It is no accident.  It is considered “conservative policy,” under the auspices of the American Enterprise Institute, Heritage Foundation and helped along by the sloth and corruption of the American Legion and Veterans of Foreign Wars.  These last two organizations, given broad oversight power over the VA, have chosen for decades to run their bars and bingo parlors and simply “look away.”
There would likely be no problems with veterans health care without the firm hand of the VSO’s at the helm, advising, using their power with congress and enjoying the powerful perks they are given across the nation, a free ride on the gravytrain, fat  paychecks, extremist politics and, as with their history of working with veterans, a long reputation for incompetence, carelessness and corruption.
Corruption is a major part of everything that uses the word “veteran.”  Most veterans charities are scams of one kind or another.  Honoring “heroes” is now as it has always been, the bailiwick of scoundrels.
Looking here at Ohio, it isn’t difficult to see the pattern.  Here in Lucas County, the local Veterans Service Commission gets millions of dollars a year that they can simply hand out to needy veterans.  When you look at such organizations across the country, the amount of money this comes to is staggering.
Two years ago, I met with the county auditor to go over the records of the VSC after we had received complaints of irregularities.  When we found three sets of tires bought for veterans, each coming to $1,200, on the same page we knew something was off.  This is what Z rated tires for a $100,000 Mercedes, Land Rover or BMW special edition cost.  Not many vets own these.
We also found that there weren’t really any records at all.  As money is handed out “privately,” records are sealed.  The accusations were that commissioners used this multi-million dollar fund as a private piggy bank, taking what they wanted knowing that they were protected, not just by the American Legion and VFW but by affiliated motorcycle clubs whose side interests paralleled other “outlaw” biker groups.
Last week, members of a veterans biker group, festooned in typical gang regalia, threatened a veteran’ activist and then threatened witnesses as well.  Included in the gang were high ranking members of the same service organizations that help oversee the Department of Veterans Affairs.
Is the whole thing a racket?
For the past 7 years, groups affiliated with Veterans Today have protested the theft of veterans land in Los Angeles.  In a recent court decision, the Department of Veterans Affairs was found to have illegally given land to private citizens and corporations.  Rather than “clean house, ” former Sec. Shinseki appealed the court decision that exposed corruption in his own organization.
This is why he is gone.  However, the appeal still stands and the VA has proven itself incapable of handling money, keeping records of doing anything that doesn’t parallel typical activities of a terrorist gang.
What has been proven?  Based on my 44 years as a veteran, I have seen with amazing consistency behaviors that make me ashamed.  It is only getting worse.  The VA is doing more and more to cover its wrongdoing and nothing whatsoever to fix anything.
I am typically the last person to say things like this but the VA proves the government can’t manage anything, least of all health care.
The VA needs to be shut down, its hospitals boarded up, its clinics shut down and private insurance plans paid for by the people of the United States, the people who love sending the military out to fight useless wars, need to be purchased for all veterans based on need, degree of real disability and other factors normal human beings can agree on.
By “normal human beings,” we mean people who have never run for office or worked for government.