Home World Palestinians Must Be Stopped!

Dear Readers and friends. Greetings from city of El-Bireh/Ramallah in Occupied Palestine. Sharing with you an excellent satire by my friend and hometown boy and a fellow American-Palestinian who lives and work in my home town of El-Bireh. Hope you enjoy it. Sami Jamil Jadallah. 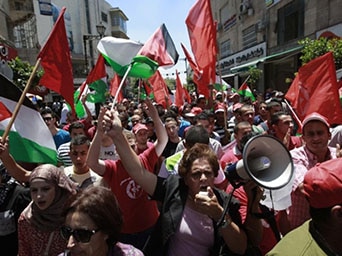 Sam Bahour: Palestinians Must Be Stopped!

I have had enough of those Palestinians. I think the world in general is also fed up with Palestinians. They have gone too far in demonizing Israelis and must be stopped. The international community must act now before it is too late and Israel is wiped off the map and a second tragedy of historic proportions fall on a significant part of the world’s Jewish population.

For starters, Palestinians embarked by land, sea and air onto Israel and displaced more than half the Jewish population of Israel in 1948. Imagine, more than half of the population of Israel displaced, forced to live to this day, 66 years later, in squalid refugee camps only hours from their homes. Other than some faint attempts to fight their way back to their homes in Israel, Israeli refugees have been “unreasonably reasonable” in accepting their fate, and continue to patiently wait for word when they can return home to Israel. This man made tragedy was perpetrated by Palestinians, who continue to this day to strangulate Jewish citizens of Israel by the use of brute force and economic suffocation in an attempt to have them voluntarily emigrate elsewhere.

Palestinians are a violent people. Every Palestinian high school graduate is forced into mandatory conscription, three years for males and two years for females. During this military stint, every Palestinian citizen is trained on the use of weapons and combat methods. Many Palestinians brag about how they brutalize Jewish Israelis during their military service; some have even posted photos on their Facebook wall of them posing with Israeli corpses or a blindfolded Israeli who was taken prisoner.

Palestinians are making Israeli livelihood miserable. They have set up military checkpoints in and around major Israeli cities, like Tel Aviv, Haifa, and Eilat. Palestinian soldiers stop only Israeli cars, sometimes for hours on end, while letting Palestinian registered cars ride through their checkpoints unhindered. When an Israeli wants to leave Israel, s/he must get Palestinian permission beforehand. If any Israeli gets on the Palestinian blacklist, his/her ability to leave Israel is impossible. Imagine not being able to leave your own country or being allowed to leave but not to return. Even when Israelis want to travel from one Israeli city to another, Palestinians have set up checkpoints, which resemble the border terminals between the US and Canada, with one difference: the process to pass is one of pure humiliation, more like cattle being pushed through caged pathways than passengers crossing a terminal.

Israel has a huge potential to be a regional economic hub of tourism and trade, but Palestinians are blocking Israel’s ability to economically develop by every means possible. Israelis love technology, but every smartphone in Israel is a dumb phone because Palestinians are refusing to allocate the electromagnetic spectrum—which they control as part of their occupation of Israel—required for 3G services to Israeli telecommunications companies. Can you imagine, those Palestinians are actually refusing to free the airspace above Tel Aviv to Israelis! It gets worse. Israelis have found a huge natural gas well in Israeli territorial waters, in the sea of Tel Aviv, and the Palestinians are refusing to give Israeli firms access to tap the gas. Even Israeli fishermen are routinely shot at when fishing in the Mediterranean Sea.

As if all of this was not bad enough, for the past 47 years Palestinians have slowly moved their citizens to the hilltops around Israeli cities. The hilltops were first confiscated by the use of force, then Arafat, and now Abbas, send Palestinian security forces to protect the confiscated lands. Once the lands are ready, Palestinians have tapped the huge amounts of funds that donors have passed to them and used the funds, not to build schools and a health care system, but rather to build permanent housing in these military enclaves around Israeli cities, in order to entice Palestinians from Ramallah and Hebron to move to Tel Aviv and other Israeli cities. This is not only against international law, but defies common sense. How can Palestinians keep paying lip service to wanting to live in peace with Israelis when they keep gobbling up more Israeli land and move their population to take up residence inside Israel?

You think it cannot get worse? Well, you’re wrong. Palestinians have kidnapped 5,000 Israelis from their homes, about 200 are Israeli children under 18 years old, and have locked them into Palestinian jails. These jails that the Palestinians maintain are all built inside Palestinian lands in the West Bank and Gaza. When Israeli mothers want to go visit their loved ones, they must get permission from Palestinian security forces to visit. Hundreds of those 5,000 prisoners are being held without charge; the Palestinians deceitfully call it Administrative Detention. You would think the world would hold these Palestinian jailers accountable, but they haven’t for decades. This is why the time has come to stop those Palestinians once and for all.

Israelis cannot be expected to live like this forever. Something must be immediately done to stop these Palestinians and hold them accountable for the daily atrocities that they are committing against humanity. Israelis are a peace loving people. They come from a religion that rests on a pillar of social justice. What is being done to them is beyond imagination.

Israeli civil society has made a call for the world to divest from Palestine. Israelis across the political spectrum are referring to how Jews around the world supported the boycott and divestment of Apartheid South Africa, which successfully collapsed that racist regime. Jews are pointing to their always being on the correct side of history, from the US civil rights movement to people’s struggles in Latin America. They now beg the world to act to stop Palestinians before it is too late.

The time is now to boycott Palestine, divest from Palestine, and apply serious sanctions on Palestine until it removes the boot of military occupation from the necks of Israelis.

Sam Bahour is a Palestinian-American business consultant in Ramallah, the West Bank, and blogs at epalestine.com. He contributes this satirical piece in the spirit of Orwell’s Nineteen Eighty-Four (1984). To make this piece fit today’s reality, just reverse the roles of Israel/Israelis and Palestine/Palestinians.