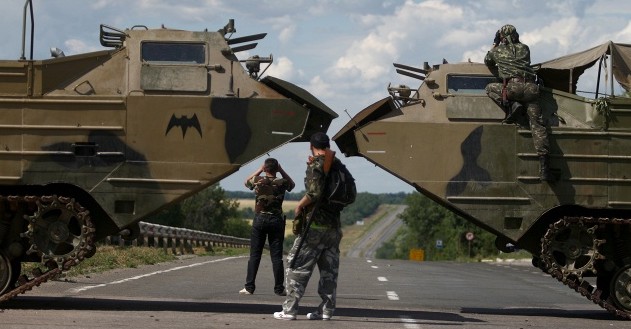 Updates will be posted

We got the first reports of a large column including armor and supply vehicles from an eyewitness close to the border on the Ukraine. I was getting ready to put the report up as unconfirmed, but took one more look for any video that might be up, and bingo… there it was… the large column moving into Lugansk as the dawn was breaking over the trees.

The tanks were not on carriers, but on their treads, an expensive way to move them, but has them instantly deployable. So you are about to see what some early morning risers in Lugansk saw. The flags you see on some of the vehicles in this first video are Donetsk militia.

Step two. I knew that with endless cell phone video cameras everywhere that there should be more video coming in of the column. The next video is from a car going by a column, not sure if this is the same one or not, but if you watch closely you will see there are air-defence missiles in the trucks with hard tops.

It looks like we might have no-fly zones being established during the cease fire, compliments of Kiev using large armored formations in the last two days of attacks. There are two dates on this video, the 16th and the 20th… so I have a translater checking for me why the two dates.

Voice behind saying, “Our guys are going to kick Benderas’ asses” (very polite translation). This is only evidence these troop are on the way to Novorossia.” So we don’t know for sure where this was shot, possibly on the Russian side of the border. We will keep looking for more updates.
The orange markings on some of the vehicles are Lugansk militia. The two Republics hold three border crossings, so we are not sure where these came over from. Donetsk ones might have been passing through Lugansk on the way west.

I am going to post this piece to get what I have done up quicker.