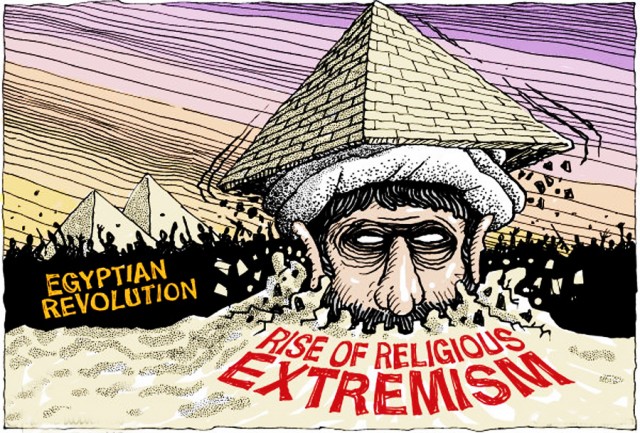 If the road to the presidency was not democratic and if the path after it was not either how could we consider the MB puppet who goes by the name of Mohamed Morsi “a democratically elected president”?

Mainstream media (MSM) and its news networks could brag about their ability to break the news as it unfold. They could boast about their on-the-ground web of international reporters all they want.

MSM networks, like Al Jazeera and CNN, could claim they bring to you the truth but that won’t change the fact that the story of the Muslim Brotherhood (MB) as the MSM had carried to the west is anything but the truth.

MB is portrayed by MSM as a political party which is not true. MB is an under-ground radical Islamist organization banned by Egyptian successive governments almost ever since it was established back in 1928 (with the help of British and American intelligence at that time)

MB is described as a moderate Islamist organization (maybe because their members wear western suits and trim their beards-LOL) where in fact the creed of their theorists, mainly Sayed Kotb, is the Gospel of Jihad for terrorist organizations around the globe (Gama’a Islamyia, Al Qaeda and ISIL- Islamic state in Iraq and the Levant)

Some will frown on labeling the MB “a terrorist organization” and will consider it an overstatement. Maybe you won’t catch a MB leader with a gun or a bomb in his hand but you will definitely encounter all sort of explosives in their uncompromising fundamentalism and radical doctrine that is based on blaspheming the non-MB (blasphemy in radical Islam means license to kill)

And if killing infidels is permitted by the MB black creed of hate and intolerance, many other heinous crimes like smuggling drugs, cultivating poppies and cannabis for raising funds (in Sinai and Afghanistan), raping virgin Muslim girls in battlefield by terrorists in the name of Sex Jihad (Jihad Al Nikah) … and many other atrocities are looked upon with favor by the twisted Fatwa and Sharia as long it is kept in the framework of Jihad.

And it is worth mentioning, or better yet clarifying, that a critical distinction should be made between MB members and so called supporters. MB members are those officially enlisted in the organization (paying monthly fees/donation and assigned with clandestine tasks according to their hierarchy in the underground organization)

AS for MB supporters, they are the hardline Muslims whose dogmatic intellect confuses MB doctrine with Islamic mainstream creed. They naively believe that the fall of MB will be the decline and end of Islam in the country.

Sheep in general could get lost for a while, but once they are led by someone who knows his way around, they could return once again on the right track.

MSM also like to define MB as the main voice of political opposition on the current Egyptian scene. But what the MSM have overlooked is the fact that MB members and leaders are no politicians in the first place (as a matter of fact they don’t accept western democracy and its un-Islamic way of power succession)

MB leaders are a bunch of radical clerics whose goals and ultimate aim, and may be methodology, don’t differ from the terrorist group of Al Qeda and ISIL; they all dream about establishing a caliphate. (The main difference is that Islamists terrorists hide in mountain caves while MB members hide behind masks of political moderation)

A caliphate, for those who might not be familiar with the Arabic term, is an Emirate, a new Islamic state ruled by laws of Sharia and headed (undemocratically) by an Amir (prince); Abu Bakr el Baghdai in case of ISIL, Osama Bin Laden or Mulla Omar in case of Al Qaeda and Mohamed Badie, supreme guide of MB in case of Egypt- based Emirate.

The Caliphate Amir is not the equivalent of an elected president. Rather, He is the shadow of god on earth, and he, by the power of absolute allegiance, is entitled to lead Muslims as he pleases. On the other hand his subjects of Muslims are obligated to follow and blindly obey him (as long he keeps up his Islam’s façades) even if it meant their lives. 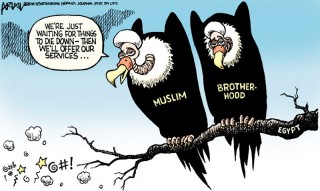 MSM usually stand firm in defending MB ousted president, M. Morsi, for he was democratically elected. But actually most, if not all political analysts and scholars of political sciences, know for a fact that democracy is not only ballots.

Also many around the world are familiar with the fact that elections, especially in the developing world, could be easily rigged. There is also a democratic tool “call for early elections” which M. Morsi adamantly refused.

In Egypt, MB so called democratically elected president won, by a tiny fraction, through buying off voters (mostly sheep) by money and food supplies. But material bribe, though was rampant, couldn’t be compared to the spiritual and religious intimidation exercised by the clerics and sheiks of MB. In almost all the mosques around Egypt a fatwa (Muslim ruling) had been issued to warn that (whoever voted no to MB Morsi would eventually end up in hell)

If the road to the presidency was not democratic and if the path after it was not either how could we consider the MB puppet who goes by the name of Mohamed Morsi “a democratically elected president”?

This is the MB true story, and the ugly side MSM never carried to the western readers and viewers. The Truth, which was never told by MSM, is that MB is a terrorist group that during a very volatile period of Egypt’s recent history tried to hijack that ancient nation, and do away with its rich culture of diversity and moderation.

Through the exploitation of western democracy, namely elections which was going to be their first and last, MB gurus and clerics were turning Egypt into an Islamic Emirate (Another Taliban, but on a bigger scale)

This is the truth MSM never told you.

Now watch this video, the kind that won’t be allowed by CNN or Al Jazeera and find out what different sects of Egyptians really think of Muslim Brotherhood.