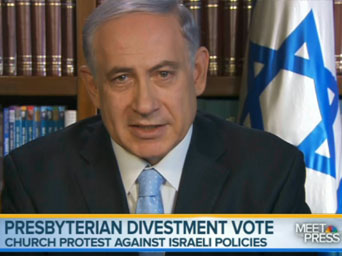 Today on NBC Meet The Press with David Gregory, Israeli Prime Minister appeared to discuss the Iraq crisis, kidnapped Israelis and the divest movement against his country for engaging in Apartheid policies in the occupied territories.  On the divest issue, yesterday, Presbyterian USA, one of the largest Christian churches in the USA voted to divest from Israel because of occupation.

In the latter part of the interview, Meet the Press host David Gregory asked him the following question on divesting;

GREGORY: As peace talks have stalled between you and the Palestinian Authority there has been new pressure from some religious groups, the Presbyterians in the United States have just passed a decision voted to divest from companies that do business with Israel they claim are used in the course of the occupation of Palestinians. How troubling is this to you? Do you think there will be other Presbyterian denominations that will follow suit?

NETANYAHU: It should trouble all people of conscience and morality because it so disgraceful. You know, you look at what is happening in the Middle East and most Americans understand this; they see this enormous area riveted by religious hatred, by savagery of unimaginable proportions. Then you come to Israel and you see the one democracy that upholds basic human rights; that guards the rights of all minorities. That protects Christians. Christians are persecuted throughout the Middle East. So most Americans understand that Israel is beacon of civilization and moderation. I would suggest to this Presbyterian organization to fly to Middle East and come see Israel for the embattled democracy that it is. And then take a bus tour. Go to Libya, go to Syria, go to Iraq and see the difference. I would give them two pieces of advice; make sure it’s armored plated bus and second, don’t say you are Christian.

Well well! The skilled and very shrewd Netanyahu strikes again on U.S. main stream media and uses the bully pulpit while  NBC offers no opposing opinion, journalist or even a member of the church itself to challenge his statement. Worse, not even host Gregory, a journalist himself, bothered to challenge anything Netanyahu said.

So in absence of any real journalism, allow me to challenge Netanyahu’s statements.

PUNISH: Mister Nentanyahu, when you say “it should trouble all people of conscience and morality because it is so disgraceful” what exactly are you referring to? I mean, what is disgraceful? Do you mean the occupation of Palestinians and the Apartheid put upon them by Israel? I mean, this is the actual issue on which the Presbyterian USA church choose divest from companies doing business with Israel! Or do you mean that the Presbyterian USA is disgraceful for choosing to out Israel as a violator of human rights and promoter of Apartheid? Which one is it? Or maybe you have another explanation for your weird non-sensical statement.

PUNISH: As for your statement that “you look at what is happening in the Middle East and most Americans understand this; they see this enormous area riveted by religious hatred, by savagery of unimaginable proportions…” and then you go on claim that Israel upholds basic human rights while you lecture Presbyterian USA to go on a bus tour of Libya, Syria and Iraq in an armored bus”..well where do I start? Hum?

First Benny, what the heck does Libya, Syria and Iraq have to do with the indigenous peoples living in the occupied terror ties under your control surrounded by your military with a Berlin Wall and check points everywhere?  Are you suggesting that Palestinians are responsible for Ben Ghazi, Iraqi ISIS events, or President Assad of Syria?  And why don’t you answer the question directly and deal with Occupation as Presbyterian USA has done in divesting from Israel because of your violations in the occupied territories. After all, they made no mention of Libya, Syria, or Iraq. So you are either insulting their intelligence or you are trying to redirect attention so you don’t have to answer for occupation. Which one is it?

And as for human rights in Israel proper, well, you are correct. Christians are treated better in Israel than in many parts of the extremist right Muslim world but still, in Israel proper, Israeli Arabs are treated as 2nd class citizens and just because somewhere else on the planet bad things are happening does NOT somehow absolve Israel from committing crimes against humanity. I mean, Mandela said Apartheid is a crime against humanity and you’re being accused of being an Apartheid state.

Now, if you want to discuss Muslim fundamentalism and extremism in Libya, Syria, or Iraq, let me know and we can do that on another show. But for now, can you please answer the question directly about divesting, Apartheid, and U.S. Christians because your current non-sensical redirect answer is insulting the intelligence of everyone watching this interview.

Do you need some water and deep breath first? Don’t worry, take your time!  But after you get your thoughts straight, be advised that we are NOT leaving until you answer the question!  Okay!  So get it together brother!

So what about Occupation? Illegal Settlers? And are your concerned that your U.S. Taxpayer billions are potentially at risk as other Christian churches begin to follow Presbyterian USA and give you a one finger up salute on Apartheid and Occupation?  Speak up Benny?  The weight of history got your tongue? We can’t hear you?

Oh and finally MEMO to David Gregory:   Hey David maybe you should change the name of your show from “Meet The Press” to “Meet The Non-Press” or better, hows bout “The Netanyahu Lecture Hour and Insult Our Intelligence Show”  You suck David! Straight up!