Submitted to Wikipedia but Curiously “Removed” and Edited

A Nuclear Thermobaric Weapon is a type of enhanced radiation weapon that utilizes boosted plasma from the nuclear fire ball to generate an intense, high-temperature explosion, and in practice the blast wave produced is typically larger and longer in duration than in a conventional explosive weapon design. 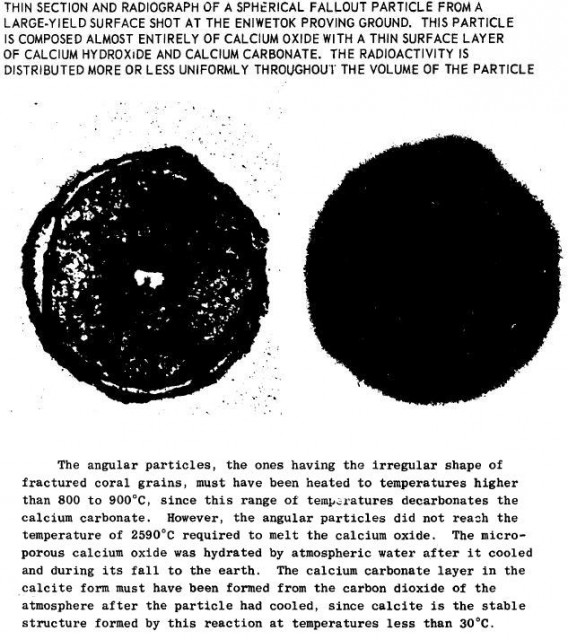 The fuel-air bomb is one of the most well-known types of thermobaric weapons. Most conventional explosives consist of a fuel-oxidizer of premix gunpowder, containing 25% fuel and 75% oxidizer, whereas thermobaric weapons are almost 100% fuel, so thermobaric weapons are significantly more energetic than conventional explosives of equal weight. Their reliance on atmospheric oxygen makes them unsuitable for use underwater, at high altitude, and in adverse weather. However the low yield nuclear thermobaric weapon solves this problem and can be use almost anywhere that it is needed.
Thermobaric weapons cause considerably more destruction when used inside confined environments such as steel reinforced buildings, tunnels, caves, and bunkers due to the sustained thermal blast wave created, and by consuming the available oxygen inside these spaces.
In contrast to a standard explosive, where oxidation in a confined region produces a blast front from essentially a point source. In a thermobaric explosion a flame front accelerates to a much larger volume producing very high pressure fronts both within the burning fuel and in the surrounding air.
Thermobaric explosives apply the principles underlying unconfined vapor cloud explosions, which include those from dispersions of flammable dusts and droplets. Such explosions are most often encountered in flour mills, their storage containers,coal mines, oil tankers and refineries.
A typical thermobaric weapon consists of a container packed with  fuel, in the center of which is a small conventional-explosive or scattering charge. Fuels are chosen based on there exothermic properties of oxidation, usually consisting of powdered metals such as aluminum, magnesium, or iron oxide, a self-contained partial oxidant.
A thermobaric bomb’s effective yield involves a number of factors, among these are how well the fuel is dispersed, how rapidly it mixes with the surrounding atmosphere, and the initiation of the igniter and its position relative to the container of fuel. In some cases, separate charges are used to disperse and ignite the fuel. In other designs, stronger cases allow the fuel to be contained long enough for the fuel to heat to well above its auto-ignition temperature, so that, even its cooling during expansion from the container, results in rapid ignition once the mixture is within conventional flammability limits.
In a non conventional nuclear thermobaric weapon design using iron oxide as the plasma fuel or secondary booster. The continued combustion of the outer layer of molecules as they come into contact with the plasma fire ball generates additional heat which maintains the temperature of the fireball, allowing it to expand fare greater than normal in size and thus helps to sustain the detonation for a longer period of time. As in the conventional thermobaric design a very strong outer bomb casing will allow the secondary boost material to be contained long enough for the fuel to be properly absorbed in to the plasma fire ball drastically increasing the fire ball size and effectiveness as a thermal induction source. This allows the weapon to be for more effective in the use against very large harden steel objects or any black bodies that will rapidly absorb infrared radiation at a distance.In confinement, a series of reflective shock waves are generated, which helps maintain the fireball and can extend its duration for several seconds as the exothermic recombination reaction occurs. Further damage can result as the fire ball cools and the pressure drops sharply, leading to a partial vacuum. When used in confined spaces as the flame front accelerate through it,a piston type after burning effect also occurs, producing a massive secondary explosive blast and a high pressure shock wave.

A fuel-air explosive (FAE) device consists of a container of fuel and two separate explosive charges. After the munition is dropped or fired, the first explosive charge bursts open the container at a predetermined height and disperses the fuel in a cloud that mixes with atmospheric oxygen, the size of the cloud varies with the size of the munition. The cloud of fuel flows around objects and into structures. The second charge then detonates the cloud, creating a massive blast wave. The blast wave will destroy unreinforced buildings,equipment and kills or injures people. The antipersonnel effect of the blast wave is more severe in foxholes, on people with body armor, and in enclosed spaces such as caves, buildings, and bunkers.
Fuel-air explosives were first developed, and used in Vietnam, by the United States. Russian scientists, developed their own FAE weapons, which were reportedly used in Afghanistan. Since then, research and development has continued and currently Russian forces field a wide array of third-generation FAE warheads.

The blast or kill mechanism against living targets is unique and unpleasant. What kills is the pressure wave, and more importantly, the subsequent rarefaction or vacuum, which ruptures the lungs. If the fuel deflagrates but does not detonate, victims will be severely burned and will also inhale the burning fuel. Since the most common FAE fuels are highly toxic, undetonated FAE should prove as lethal to personnel caught within the cloud as most chemical agents.

The Russian armed forces have developed thermobaric ammunition variants for several of their weapons, such as the TGB-7V thermobaric grenade with a lethality radius of 10 meters (33 ft), which can be launched from a RPG-7. The GM-94 is a 43 mm pump-action grenade launcher which is designed mainly to fire thermobaric grenades for close quarters combat. With the grenade weighing 250 grams (8.8 oz) and holding a 160 grams (5.6 oz) explosive mixture, its lethality radius is 3 meters (9.8 ft); however, due to the deliberate “fragmentation-free” design of the grenade, 4 meters (13 ft) is already considered a safe distance. The RPO-A and upgraded RPO-M are infantry-portable RPGs designed to fire thermobaric rockets. The RPO-M, for instance, has a thermobaric warhead with a TNT equivalence of 5.5 kilograms (12 lb) of TNT and destructive capabilities similar to a 152 mm High explosive fragmentation artillery shell. The RSgH-1 and the RSgH-2 are thermobaric variants of the RPG-27 and RPG-26 respectively. The RSgH-1 is the more powerful variant, with its warhead having a 10 meters (33 ft) lethality radius and producing about the same effect as 6 kg (13 lb) of TNT.[ The RMG is a further derivative of the RPG-26 that uses a tandem-charge warhead, whereby the precursor HEAT warhead blasts an opening for the main thermobaric charge to enter and detonate inside. The RMG’s precursor HEAT warhead can penetrate 300 mm of reinforced concrete or over 100 mm of Rolled homogeneous Armour, thus allowing the 105 millimeters (4.1 in) diameter thermobaric warhead to detonate inside.
Other examples include the SACLOS or millimeter wave radar-guided thermobaric variants of the 9M123 Khrizantema, the 9M133F-1 thermobaric warhead variant of the 9M133 Kornet, and the 9M131F thermobaric warhead variant of the 9K115-2 Metis-M, all of which are anti-tank missiles. The Kornet has since been upgraded to the Kornet-EM, and its thermobaric variant has a maximum range of 10 kilometers (6.2 mi) and has the TNT equivalent of 7 kilograms (15 lb) of TNT. The 300 mm 9M55S thermobaric cluster warhead rocket was built to be fired from the BM-30 Smerch MLRS. A dedicated carrier of thermobaric weapons is the TOS-1, a 24-tube MLRS designed to fire 220 mm caliber thermobaric rockets. A full salvo from the TOS-1 will cover a rectangle 200×400 meters. The Iskander-M theater ballistic missile can also carry a 700 kilograms (1,500 lb) thermobaric warhead.
Many Russian Air Force munitions also have thermobaric variants. The KAB-500-OD variant of the KAB-500KR has a 250 kg (550 lb) thermobaric warhead. The ODAB-500PM and ODAB-500PMV unguided bombs carry a 190 kg (420 lb) fuel-air explosive each. The KAB-1500S GLONASS/GPS guided 1,500 kg (3,300 lb) bomb also has a thermobaric variant. Its fireball will cover over a 150-meter (490 ft) radius and its lethality zone is a 500-meter (1,600 ft) radius.
In September 2007 Russia exploded the largest thermobaric weapon ever made. The weapon’s yield was reportedly greater than that of the smallest dial-a-yield nuclear weapon at its lowest setting. Russia named this ordnance the “Father of All Bombs” in response to the United States developed “Massive Ordnance Air Blast” (MOAB) or the “Mother of All Bombs”, and it held the position of being  the most powerful non-nuclear weapon in history. The bomb contains a 7 tons charge of  liquid fuel ethylene oxide, mixed with aluminum, surrounding a high explosive charge that when detonated creates an explosion equivalent to 44 metric tons of TNT.

Current US FAE munitions include:

The XM1060 40-mm grenade is a small-arms thermobaric device, which was delivered to U.S. forces in April 2003. Since the 2003 Invasion of Iraq, the US Marine Corps has introduced a thermobaric ‘Novel Explosive’ (SMAW-NE) round for the Mk 153 SMAW rocket launcher. One team of Marines reported that they had destroyed a large one-story masonry type building with one round from 100 yards (91 m).
The AGM-114N Hellfire II, first used by U.S. forces in 2003 in Iraq, uses a Metal Augmented Charge (MAC) warhead that contains a thermobaric explosive fill using fluoridated aluminum layered between the charge casing and a PBXN-112 explosive mixture. When the PBXN-112 detonates, the aluminium mixture is dispersed and rapidly burns. The resultant sustained high pressure is extremely effective against people and structures.
According to UK Ministry of Defense, British military forces have also used thermobaric weapons in their AGM-114N Hellfire missiles carried by Apache helicopters and UAVs against the Taliban in the War in Afghanistan.The US military also used thermobaric weapons in Afghanistan. On 3 March 2002, a single 2,000 lb (910 kg) laser guided thermobaric bomb was used by the United States Army against cave complexes in which Al-Qaedaand Taliban fighters had taken refuge in the Gardez region of Afghanistan. The SMAW-NE was used by the US Marines during the First Battle of Fallujah and Second Battle of Fallujah.
Thermobaric and fuel-air explosives have been used in guerrilla warfare since the 1983 Beirut barracks bombing in Lebanon, which used a gas-enhanced explosive mechanism, probably propane, butane or acetylene. The explosive used by the bombers in the 1993 World Trade Center bombing incorporated the FAE principle, using three tanks of bottled hydrogen gas to enhance the blast. Jemaah Islamiyah bombers used a shock-dispersed solid fuel charge, based on the thermobaric principle, to attack the Sari nightclub in the 2002 Bali bombings.