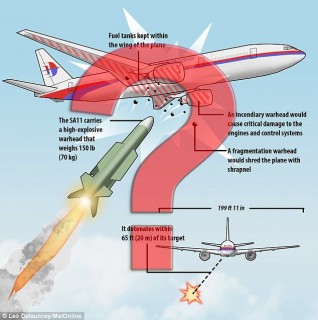 A previous post exposed the issue of foreknowledge when videos dealing with the aftermath of the alleged missile attack, were revealed to be produced prior to the crash of Flt MH-17.

On July 20th, the Corbett Report published a useful summary that discloses many irregularities in corporate media coverage and international governmental propaganda sources.

EXHIBIT A: The aircraft allegedly shot down over Shaktarsk is a Boeing 777-200, (Tail number, 9M-MRD) – the identical model aircraft that remains missing in the mysterious disappearance on Flt. MH-370 with tail number, 9M-MRO).

Recent, “near conclusive” evidence reports that MH-370 (9M-MRO) was actually hijacked raising the possibility that aircraft parts from 9M-MRO could have been salvaged, altered, re-painted and used to create the crash scene for MH-17 (9M-MRD).

Curious initial reports claim the smell of decaying corpses was evident by witnesses on initial encounter with the crash site. On July 18,  ABC News reported:

“A top pro-Russia rebel commander in eastern Ukraine has given a bizarre version of events surrounding the Malaysian jetliner crash — suggesting many of the victims may have died days before the plane took off.”

Speculation is developing that 9M-MRO alias MH-370 may have been substituted for Flight MH-17 to create a False Flag event.  In the evidence shown below, Flight Radar-24 reports that MH-17 was reported “canceled” by Malaysia Airlines. If the flight was canceled, the circumstances allow for the substitute of a “bogey” aircraft on a mission. This could explain the false photo story by a passenger at Amsterdam terminal as an attempt at “deception management”.

With the development of fly-by-wire and drone technology, it’s possible that passengers aboard MH-370 were already deceased when the missile struck the aircraft. It will be interesting to see how the allegedly deceased pilots and crew will be memorialized by the media.

EXHIBIT B: Mail Online reported the allegedly doomed Flight MH-17 carrying the tail number 9M-MRD was  photographed by a passenger, Cor Pan,  prior to boarding.   Coser inspection of the nose gear (See also EXHIBIT A) reveals the aircraft carries the tail number 9M-MRC. This finding makes it impossible that the “doomed flight” photo was taken on the day of departure. Records available in EXHIBIT G show the previous departure of 9M-MRC from Amsterdam as Flt MH-17 occurred on 7/11/2014.

EXHIBIT C: Photos of the crash scene reveal key sections of aircraft wreckage that appear like landscape at “stone henge”. Of interest is the section of aircraft containing the tail number or “N” number that serves as a registration number to identify a particular aircraft in the Malaysia Airlines fleet.

The Tail Number for the allegedly doomed flight is 9M-MRD. The tail section apparently fell from the sky in a vertical position as a convenient opportunity for photographers to easily show the world this plane is not to be confused with tail number 9M-MRO from the missing flight MH-370 – the Malaysia airliner that is now revealed to have been hijacked.

With the example of this “agent” walking all over the crash scene evidence, the media has already promoted the idea that the NTSB or designated crash scene investigators will not likely be able to carry out a competent investigation. After all, what would a thorough forensic analysis of the crash scene be obligated to report if it were allowed to take place?

EXHIBT E: Alleged crash scene baggage seems too clean to be true. How likely is it that not one ripped, burnt, charred, shredded or blood-stained item can be detected in this photo?

As horrific as the crash was reported to be, why did Malaysia Airlines boldly resume normal scheduling for the following day (7/18) and before the risk of a repeated missile attack could be determined.? The screen-shot was captured after takeoff and while the aircraft (9M-MRL) was still in the air and presumably “safely” en route. When did Malaysia Airlines determine “business as usual” was more important than air safety?

EXHIBIT G: The record shows that from June 12 through July 17, thirteen (13) different B-777-200 aircraft were assigned to fly the MH-17 flight schedule for a total of 36 trips from Amsterdam to Kuala Lumpur.

Of special interest is the last flight for 9M-MRD on this route, prior to the alleged crash, occurred on June 18, 2014 – an unusually long interval of one  month .  During this time only 3 other aircraft flew the route only one time:

Two of the aircraft flew the route within 12 and 6 days, respectively with the probability both aircraft could fly the route again before approaching or exceeding a 30 day hiatus. This distinguishes 9M-MRD and 9M-MRM as the only two – out of 13 aircraft – to exceed a 3 week hiatus between scheduled service as Flight MH-17.

There is much more to discover about this story that gangster media will never report. If you are paying for cable TV you are most likely financing the largest source of disinformation on earth.