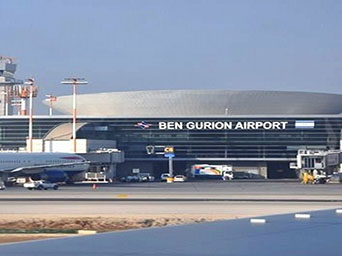 Hamas has hit Palestine’s bloodthirsty occupier where it could hurt real bad — in the soft under-belly that is Ben Gurion airport. The Resistance has achieved this by lobbing a rocket too close for comfort and causing air carriers in the United States and Europe to halt flights to Tel Aviv after warnings from governmental agencies concerned about passenger safety.

“The carriers are making the right call,” said Robert Mann, an airline consultant in Port Washington, New York. “They are ultimately legally responsible for their operations and thus, they have to be at least as cautious and in many cases more cautious than any guideline that they are given.”

Reuters reported that Israeli officials, including Prime Minister Netanyahu, called for US airlines to resume flights to Israel. “There is no need for US carriers to suspend flights and reward terrorism,” said a statement from Israel’s Transportation Minister Yisrael Katz.

But a senior Obama administration official said: “We’re not going to overrule the FAA, period… when a rocket lands a mile from that airport, that kind of trips their wire.”

Strictly speaking Ben Gurion airport, near Tel Aviv, belongs to the Palestinians anyway. It was formerly Lydda airport; and Lydda, a major town in its own right during the British mandate, was designated Palestinian in the 1947 UN Partition. In July 1948 Israeli terrorist troops seized Lydda, shot up the town and drove out the population as  part of their ethnic cleansing programme. In the process they massacred 426 men, women, and children. 176 of them were slaughtered in the town’s main mosque. See http://www.palestineremembered.com/al-Ramla/al-Lydd/index.html for the lurid details.

Those who survived were forced to walk into exile in the scalding July heat leaving a trail of bodies — men, women and children — along the way. Israeli troops carried away 1,800 truck loads of loot. Jewish immigrants then flooded in and Lydda was given a Hebrew name, Lod.

So Israel has no real right to Lydda/Lod/Ben Gurion airport — it was stolen in a terror raid, as was so much else. It’s Israeli terror that has been rewarded all these years by airline flights.

Today the airport handles over 14 million passengers a year and is the international gateway to Israel. Hamas’s thrust at Ben Gurion may be just a prick. But they only have to lob one more rocket into the vicinity and and it becomes a serious belly wound. Most visitor traffic from abroad would dry up.

Before Israel’s flag-wavers get all hot under the collar, let’s consider what happened to Gaza’s airport. The Oslo II Agreement of 1995 provided for one to be constructed. The Yasser Arafat International airport was built with funding from Japan, Egypt, Saudi Arabia, Spain, Germany and Morocco, and cost $86 million. Arafat and US President Clinton attended the opening in 1998. Owned and operated by the Palestinian Authority it was capable of handling 700,000 passengers a year.

In December 2001 Israel destroyed the radar station and control tower, and cut the runway.

The only usable airstrip in Gaza today is a small airfield at Gush Katif, which is only suitable for short take-off and landing aircraft. The Israeli air blockade prevents it being used.

After this and all the other economic outrages committed against the Palestinians, Hamas will taste sweet revenge it they succeed in shutting down traffic through Ben Gurion and causing grief to Israel’s tourist trade and other business.