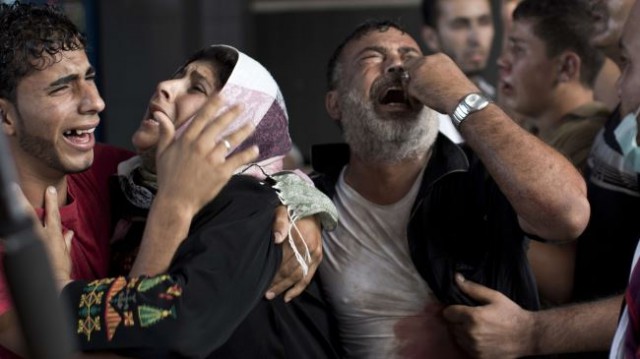 What is wrong with Israelis?

Every time Israel embarks on a new round of wholesale slaughter in Gaza, polls show that more than 90% of Israelis support the butchery.

For Israelis, mass-murdering children is a spectator sport. When the IDF starts dropping cluster bombs, white phosphorous, DIME munitions and other horrendous weapons on Gaza, crowds of Israelis pack the hilltops to barbecue meat, drink alcohol and cheer as they watch Palestinian children being blown to bits. 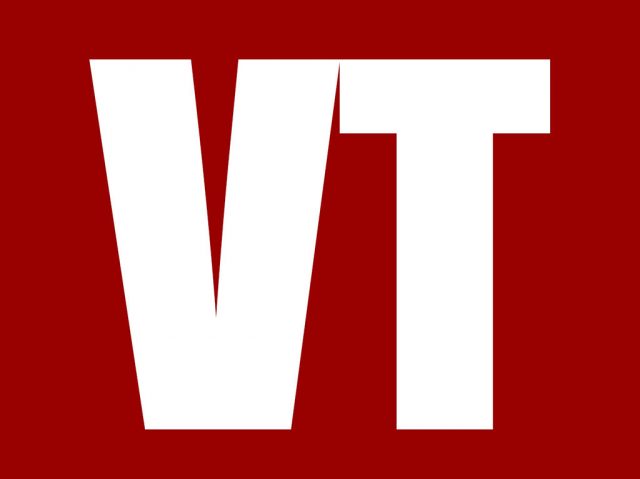 Every day in Israel’s major cities, mobs of Israelis gather to hunt down and brutalize Arab children and teenagers. Police stand by as they beat their victims into unconsciousness. According to Israeli blogger Elizabeth Tsurkov, the mobs’ favorite chant is: “Tomorrow there’s no school in Gaza, they don’t have any children left.”

Israelis proudly tweet their desire to murder children: “Kill Arab children so there won’t be a next generation,” “Stinking Arabs may you die, amen,” and “Arabs may you be paralyzed and die with great suffering” are some representative tweets exposed by Israeli journalist David Sheen.

Israeli parliamentarian Ayelet Shaked has announced that she wants to kill not only Palestinian children, whom she calls “little snakes,” but also the Palestinian mothers who raise them. Recently Shaked openly called for the genocidal murder of every Palestinian. Instead of being sent to the Hague, prosecuted, ejected from government, or even rebuked, she was lionized by Israeli society.

Gilad Sharon, son of Ariel “Butcher of Sabra and Shatila” Sharon, agrees with Shaked. In an op-ed published in the Jerusalem Post, Sharon advocated using nuclear weapons to exterminate the Palestinians. He wrote that Israel needs to “flatten all of Gaza,” adding that “The Americans didn’t stop with Hiroshima – the Japanese weren’t surrendering fast enough, so they hit Nagasaki, too.”

While they enjoy slaughtering children and their mothers, Israelis take special relish in killing pregnant women. A T-shirt popular in the Israeli army shows a pregnant woman with a target on her belly. The legend reads: “One shot two kills.”

“Yesterday at this spot the Israelis shot eight young men, six of whom were under the age of eighteen. One was twelve. This afternoon they kill an eleven-year-old boy, Ali Murad, and seriously wound four more, three of whom are under eighteen. Children have been shot in other conflicts I have covered—death squads gunned them down in El Salvador and Guatemala, mothers with infants were lined up and massacred in Algeria, and Serb snipers put children in their sights and watched them crumple onto the pavement in Sarajevo—but I have never before watched soldiers entice children like mice into a trap and murder them for sport.”

An October 2004 study by British Medical Journal confirmed that this is a common practice, and never punished: “Two thirds of the 621 children (two thirds under 15 years) killed at checkpoints, in the street, on the way to school, in their homes, died from small arms fire, directed in over half of cases to the head, neck and chest – the sniper’s wound…Clearly, soldiers are routinely authorised to shoot to kill children in situations of minimal or no threat.”

During its onslaught on Gaza, Israel has been systematically slaughtering children in schools, emergency shelters, and even as they play soccer on the beach. Under the headline “Israel’s offensive in Gaza has ‘killed more children than fighters,’” The London, UK Telegraph reported that Israel is “waging war on children.”

Again I ask: What is wrong with Israelis? What has produced this nation of demonic child-killing monsters?

Torat Ha’Melech is not a marginalized radical screed; on the contrary, it is an authoritative guide for Israel soldiers. Its authors are two of Israel’s leading rabbis, Yitzhak Shapira and Rabbi Yosef Elitzur.

“Drawing from a hodgepodge of rabbinical texts that seemed to support their genocidal views, Shapira and Elitzur urged a policy of ruthlessness toward non-Jews, insisting that the commandment against murder ‘refers only to a Jew who kills a Jew, and not to a Jew who kills a gentile, even if that gentile is one of the righteous among nations. ‘The rabbis went on to pronounce all civilians of the enemy population ‘rodef,’ or villains who chase Jews and are therefore fair game for slaughtering.”

The Israeli child-killer personality has much in common with the psychiatric term sociopath: “A person with a psychopathic personality whose behavior is antisocial, often criminal, and who lacks a sense of moral responsibility or social conscience.”

Israeli Prime Minister Benjamin Netanyahu spoke like a sociopath when he said that the Palestinian resistance “uses telegenically dead Palestinians for their cause.” The expression “telegenically dead” is a stunningly insensitive euphemism for the corpses of little children with their body parts blown off; and of course it was Netanyahu himself who killed them, and then tried to blame the victims for his actions.

What can be done about the sociopathic Israel?

One of America’s leading experts on sociopaths is Dr. Robert Hare, who works with the FBI’s Child Abduction and Serial Murder Investigative Resources Center. Since Israel is the biggest child abductor and child serial killer on the planet, perhaps we could send the whole Zionist entity to Dr. Hare for treatment.

Unfortunately, as Dr. Hare admits, sociopaths are usually impossible to cure. The best we can do is detect them, using the Hare Psychopathy Checklist, and then protect ourselves from them.

A sociopathic individual can be arrested and imprisoned. A sociopathic nation poses a much bigger problem. So how can we protect Palestinian children from the Israeli serial murderers?

The international community needs to completely ostracize Israel, indict its leaders for war crimes, and use the combined diplomatic and military force of the world’s nations to peacefully dismantle the genocidal Zionist entity. But that cannot happen until the Zionists’ death-grip on the West’s media, finance and politics is broken once and for all. 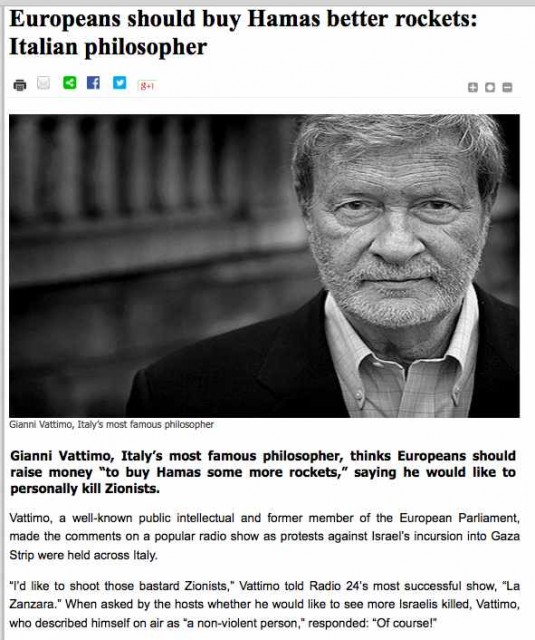 In the mean time, all individuals of good will must help the Palestinians defend themselves. As Italy’s leading philosopher Gianni Vattimo recently said, Europeans and other decent people around the world “should raise money to buy Hamas better rockets.” Vattimo also urged Europeans to form international brigades to fight along with Hamas, in the same way that foreign volunteers fought Franco during the Spanish Civil War.

If there are any decent, non-sociopathic Israelis left, they too should join those brigades, just as novelist Breyten Breytenbach and other white South Africans of conscience joined the armed resistance to apartheid. Where are the Israeli equivalents of Breytenbach? There must be at least one or two human beings left in Israel; we will learn who they are when they die in martyrdom operations against their sociopathic child-killing compatriots.