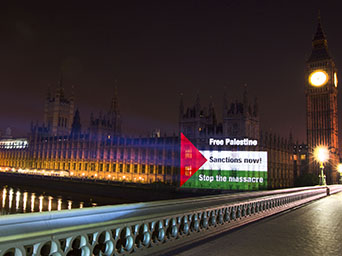 Sanctions, arms embargo and end to massacre demanded in lights

The Palestine Solidarity Campaign has projected an image of the Palestinian flag onto the Houses of Parliament in London. The image includes calls for sanctions against Israel and an end to the massacre in Gaza.

Hugh Lanning, Chair of PSC, criticised the British Government for standing by whilst Israel slaughters Palestinians http://www.palestinecampaign.org/gazaprojection/#sthash.q3vjqeRU.dpuf . “The Prime Minister, David Cameron, has failed to listen to the voices of hundreds and thousands of British people who have taken to the streets. He has failed to stand up for an occupied people being ruthlessly murdered by an occupying power. The Prime Minister has weakly accepted the US’s political position, which is totally out-of-step with the mood of this country. It is time for firm action consistent with international law.”

He said Cameron must demand an end the massacre in Gaza, implement an immediate and total arms embargo on Israel and impose sanctions until Israel ends its illegal occupation.”

Of course a splendid idea like this is not without risk of flak from the usual suspects. Jonathan Arkush, vice-president of the Board of Deputies of British Jews, said:

“Projecting the flag of Palestine onto the Houses of Parliament is a stunt that will be offensive to the British public. We don’t need to import conflicts in the Middle East to this country. We should instead be exporting values and efforts designed to bring about a peaceful resolution to the conflict. The PSC has once again shown itself to be an irrelevant and extremist pressure group. It appears to be motivated by nothing more than a hatred of Israel, the only democracy and true ally of the West in the Middle East.

“The PSC is silent on the rockets and tunnels of Hamas, an internationally proscribed terrorist organisation, but extremely vocal against Prime Minister David Cameron whose statements on the Gaza conflict have been measured, and constructive.”

“Offensive to the British public”? Is Mr Arkush now speaking for all of us? The Palestinian flag projected onto the Houses of Parliament is absolute fine with me. What I find “offensive” is the large number of Israel flag-wavers that stalk the corridors inside.

The frequent claim that Israel is the only democracy in the Middle East is wearing thin considering the raft of disciminatory laws against non-Jews. Mr Arkush forgets that Palestine is a democracy that’s not allowed by Israel and its sponsors to function properly. How many Palestinian parliamentarians are langushing in Israeli jails, Mr Arkush? 34 is it?

And if Israel ended its illegal occupation and siege there would be no need for tunnels.

As for the PSC’s silence on rockets, Mr Arkush is himself silent about the continuing occupation and blockade, the vast amount of state-of-the-art ordance fired by Israel into the tight-packed humanity of Gaza and the need for Israel’s military to re-arm from America’s stockpile in order to carry on the slaughter.

Hamas’s political wing is not a proscribed terror organisation in the UK. And since Cameron repeatedly pledges his unwavering support for Israel come what may, who can expect any sense from him?

In another statement the Board expresses “dismay and revulsion at the kidnapping of Israeli soldier Hadar Goldin…. The kidnapping took place as part of a violent ambush by Hamas, within hours of the UN, US and Egypt backed ‘72-hour ceasefire’ taking effect.”

I imagine we all feel sympathy for the young man and his family, if he has been captured (as I write there’s no proof). But is he not a member of an invading army that has been slaughtering civilians for the last 3 weeks and a legitimate target? Which side breached the ceasefire has not yet been clearly established. But if it was Hamas they should, in my opinion, hand him back none the worse for his experience and a little wiser. That would play well on both sides and, importantly, with the outside world. Even if the Israelis broke the ceasefire they should do it.

By the way, does the Board of Deputies ever express similar revulsion whenever Palestinian youngsters in the West Bank (where there are no rockets, no tunnels) are abducted from their homes in the middle of the night by Israel’s armed snatch squads?