Richard Gage AIA and Architects and Engineers for 9/11 Truth have launched a $1,000 9/11 debate challenge! My interview with Richard Gage will be broadcast this Monday, 11 to noon Eastern, at No Lies Radio and then archived here. 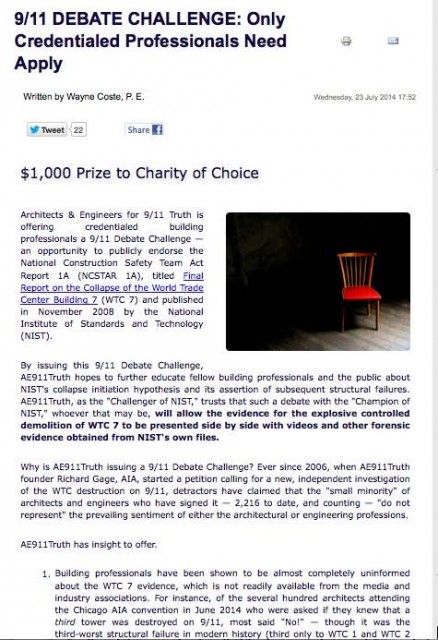 On this (Friday) evening’s live show, which will also be archived, we’ll discuss the history of 9/11 debate challenges – and try to find someone to argue in favor of the official story. The second hour will feature VT Editor Jim Fetzer and Globalization Studies professor Anthony Hall of the University of Lethbridge talking about academic freedom and the Orwellian suppression of 9/11 truth.

We were hoping that some guy named Frank McLaughlin from the anti-9/11 truth site JREF would show up to debate Rick Shaddock of ANETA during the first hour. Rick is a “computer professional for 9/11 truth” who has been trying to find a qualified JREFer willing to debate either physicist Dr. David Griscom or himself. Frank, who like Rick is a computer professional, at first appeared willing to debate – but then started generating endless excuses for weaseling out.

I take these debate challenges personally. Having been politically blacklisted from teaching in American universities, starting with the “sifting and winnowing” University of Wisconsin, I issued the first-ever $1,000 9/11 debate challenge several years ago. My point: If the University refuses to employ me due to my interpretation of 9/11, it needs to show why my interpretation is not only wrong, but so egregiously wrong that it makes me unemployable. Yet not one of the thousands of teachers in the UW system will defend the 9/11 Commission’s “19 hijackers” myth in a debate – even for $1,000 (since doubled to $2000).

I was employed by/through the University of Wisconsin-Madison as a teacher or paid scholar every year from 1995 through 2006. Then in summer 2006 State Rep. Steve Nass (R-Whitewater), apparently egged on by Karl Rove and Lynn Cheney, launched a witch-hunt demanding that I be fired from teaching due to my research on 9/11. Since the witch-hunt, I have been repeatedly turned down for positions I am qualified to teach. (I was never turned down for any UW teaching jobs prior to the witch hunt.)

A member of the hiring committee in UW-Madison Asian Studies stated that the committee was told in 2007 that I could not be hired for political reasons. I was also turned down for a tenure-track Islam-Arabic-Humanities position at U.W.-Whitewater – they closed the position and returned the funds to the feds rather than hire me – purely due to my 9/11 research, according to whistleblower Howard Ross, then UW-Whitewater’s Dean of Humanities. Likewise, the University of Illinois-Urbana closed a tenure-track Islam-Humanities position for which I had applied, and for which I was eminently qualified, rather than hire me.

Having repeatedly seen universities close positions, or hire less-qualified individuals, when I apply for teaching jobs since the 2006 witch hunt, I have concluded that I have been informally blacklisted due to my high-profile research, publication and activism on 9/11.

A well-connected UW-Madison professor told me that the day after I appeared on Sean Hannity’s Fox News show the University lost more than half a million dollars in cancelled contributions to the Engineering school from private donors in less than 24 hours – and also expected to take a hit in federal funding. That very day (July 11th 2006) as the University was losing over $500,000, Provost Patrick Farrell called me and begged me to stop giving interviews. His first words were: “Kevin, you’re killing us!”

So I have concluded that nobody from the University will defend the 9/11 Commission, not even for $2,000, because:

1) They suspect that I may be right and/or capable of winning the debate and embarrassing them;

2) They suspect that their own livelihoods and reputations, and the fiscal well-being of their department and institution, could be damaged by any attempt whatsoever to pursue the truth about 9/11.

Or as Upton Sinclair put it: “It is difficult to get a man to understand something, when his salary depends on his not understanding it.”

I sympathize, to some degree, with the cowardly professoriat of the University of Wisconsin. They are living in fear and insecurity. What a sad way to live.

But I have no sympathy for the mega-cowards who attacked me in the media but refused to debate me. These individuals are utterly despicable. Here are their names, emails, and telephone numbers:

Downs is a political science professor who poses as a defender of academic freedom. He was quoted in the media in July 2006 as ridiculing my research on 9/11 (which he knew nothing about) and saying that though I couldn’t be immediately fired from teaching, the best thing would be to never re-hire me after my semester contract was up. (The University has followed his advice, thereby depriving me of my livelihood and robbing me of roughly two million dollars in projected lifetime earnings.) When I asked Downs in 2006 to defend the 9/11 Commission in a public debate, he initially expressed interest, then weaseled out. He also refused a request by the UW-Madison History Club to debate me. He has continued to chicken out of debate challenges ever since. 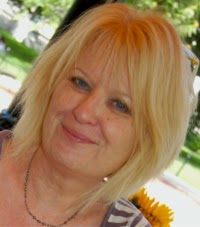 Law professor Ann Althouse has flung dozens of insults my way: “nutty,” “despicable,” “Nazi,” “klansman.” Naturally she won’t debate me – she apparently doesn’t realize hurling ad hominem attacks while refusing debate amounts to conceding that I’m right and she’s wrong. As a trained law professor, she could easily win a debate…if I were remotely as far off base as she says. But she won’t do it, even for $2000. 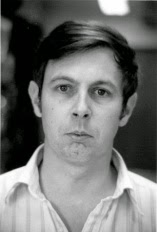 Like Downs and Althouse, Onellion knew nothing about my research when he insulted me in the media:

…”He’s a fruitcake,” says Marshall F. Onellion, a physics professor at the University of Wisconsin. “He has no education in any engineering or science area pertinent to how, or whether, buildings fall down when hit by airplanes. Since he can’t evaluate the evidence presented, he shouldn’t have an opinion” that will influence students…

Since Onellion obviously thinks he can evaluate evidence better than I can, he should have confidence in his ability to win a debate…right? Wrong. The coward has repeatedly refused my debate challenge.

This bigot apparently fears he will lose a debate about physics and engineering – his two specialties – to a humanities scholar. Even $2,000 wouldn’t compensate that kind of humiliation.

So feel free to call and email these people, copying to:

I discussed my experience as a UW-Madison witch hunt target at the Academic Freedom Conference last spring at the University of Illinois Champagne-Urbana:

Trump could hang Bill Kristol over 9/11