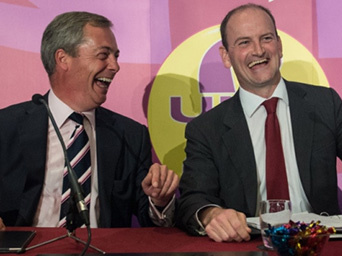 Desperate for its first seat in Parliament

The UK Independence Party (UKIP), which hopes for a big breakthrough in next year’s general election, has been wining and dining potential Conservative defectors one of which has actually come across.

Last week Douglas Carswell stepped down as MP for Clacton-on-Sea, triggering a by-election in which he will now stand as the UKIP candidate.

He’s talking about Israeli courts, of course. Hasn’t Mr Carswell heard that the International Court of Justice in 2004 ruled that the Wall is illegal? http://www.icj-cij.org/docket/index.php?pr=71&code=mwp&p1=3&p2=4&p3=6  Not only that, Israel must “cease forthwith the works of construction of the wall, dismantle forthwith those parts of that structure situated within the Occupied Palestinian Territory and forthwith repeal or render ineffective all legislative and regulatory acts adopted with a view to construction of the wall and establishment of its associated régime… Israel must further make reparation for all damage suffered by all natural or legal persons affected by the wall’s construction…

“All States are under an obligation not to recognize the illegal situation resulting from the construction of the wall and not to render aid or assistance in maintaining the situation created by such construction.  The Court further finds that it is for all States, while respecting the United Nations Charter and international law, to see to it that any impediment, resulting from the construction of the wall, in the exercise by the Palestinian people of its right to self‑determination is brought to an end.  In addition, all States parties to the Fourth Geneva Convention are under an obligation, while respecting the Charter and international law, to ensure compliance by Israel with international humanitarian law as embodied in that Convention.”

That was 10 years ago. Israel has ignored the ruling and so has everybody else, including Carswell and his mates in Westminster.

Carswell was reportedly part of a heated discussion in 2012 when thirty MPs belonging to the Conservative Friends of Israel accused the then foreign secretary William Hague of being part of a “bigoted” Foreign Office plot against Israel http://www.gatestoneinstitute.org/2932/pro-palestinian-bias-europe-foreign-policy . Carswell said Hague was “under the thumb” of “pro-Arabist” diplomats in the Foreign Office. “The Foreign Office displays a kind of bigotry towards Israel,” he said. “You are being one-sided and saying completely unacceptable things about a fellow democratic country.”

He was supported by other Israel flag-waving MPs including James Arbuthnot, who called on Hague not to “alienate” Israeli Prime Minister Benjamin Netanyahu, whom Hague had recently called “belligerent”, a mild enough description.

Hague snapped back: “The Foreign Office is not pro-Palestinian. I’ve never heard such claptrap.”

This might be funny if it wasn’t so pathetic. Agent Hague has himself been an adoring Friend of Israel since his schooldays and he played the fawning sycophant to the Zionist regime throughout his reign at the Foreign Office, always ranting about the importance of international law but never willing to apply it to Israel’s abhorrent crimes. And it was Hague who was largely responsible for ‘fixing’ our Laws of Universal Jurisdiction so that Israel’s war criminals can visit London without fear of arrest.

What a Friend of Israel embraces… and finds himself defending

If UKIP leader Nigel Farage was smart he’d turn the searchlight on the three main parties’ undying support for the racist Israeli regime whose policies have terrorised, tormented and dispossessed Arab Christians and Muslims in the Holy Land throughout 67 years of brutal occupation. He could expose the many MPs who actively support and encourage this cruelty through their membership of Friends of Israel groups that are allowed to flourish in those parties.

Unfortunately UKIP has fallen into the same reeking swamp. It now has its own Israel fan club. According to the UKIP FoI website, “as a libertarian, capitalist, democratic party, UKIP is a natural friend of the world’s only Jewish State.  The decision to create UKIP FoI was taken by the UKIP National Executive Committee in 2005. In 2010 it launched at the Party’s Annual Conference with strong enthusiasm.”

And if, after the latest bloodbath by the Israelis in Gaza you are still Israel’s special Friend, you are presumably comfortable with blowing to smithereens hundreds of children, maiming thousands more, trashing vital infrastructure such as hospitals, schools, power plants and clean water supplies, and causing $6bn of devastation that will take 20 years to rebuild. And by the way where is the money for that coming from?

Nigel Farage should, I suggest, do the decent thing, shut down his party’s Israel support machine and hold up his principled action as a challenge to others. They won’t accept because they rely heavily on funding from the pro-Israel lobby and are terrified of the backlash. Their paralysis could place UKIP on the high moral ground. UKIP would even earn the respect of the rapidly growing BDS movement (Boycott, Divestment and Sanctions), whose campaigns against corporates that profit from the Occupation are having considerable success. There is now no doubt in the public mind who the real terrorists are, and MPs and MEPs who continue to wave the Israeli occupier’s flag may be next on the BDS target lists.

Attempts to scrub up UKIP’s image are not helped by recruiting the likes of Mr Carswell, who will simply swell the membership of FoI and add to the disinformation it peddles.

The other nasty smell about the Carswell defection is that UKIP had already selected Mr Roger Lord as the party’s prospective parliamentary candidate (PPC) for the Clacton seat.  Now he’s being elbowed aside by UKIP head office to make room for a Conservative renegade whom Mr Farage regards as a great catch. It seems Carswell was parachuted into the constituency by the Conservatives for their 2005 general election, while Lord is a person with established local roots who has devoted considerable time and effort to developing UKIP’s chances of winning the seat.

Now we’re told that Mr Lord was only selected as PPC for the general election, not for any by-election that might crop up in the meantime. Carswell, as the sitting MP, may well give UKIP the victory it craves. And political cravings must be satisfied whatever the cost. But how far could one trust the pledges of a party such as this?