Home Government All-Party Agreement in Canada on War with ISIL

The busy promoters of aggressive war at the Globe and Mail got their money shot on an Iraqi runway. The dominant image on the middle page of the first section of the Sept. 4 edition pictured the Canadian government’s Foreign Affairs Minister, John Baird, flanked by his partisan “critics” in the NDP and Liberal parties. 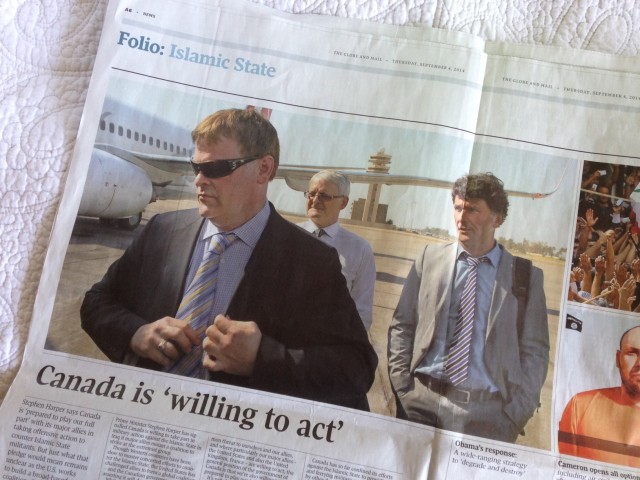 The underlying message was that Canadians will not be presented with a meaningful parliamentary debate on the impending US-Israeli led military encounter with the Islamic State of Syria and the Levant, ISIL. The well-funded mercenary army of ISIL is a strange concoction shaped by some of the psychological stylists of the Global War on Terror to embody and confirm every possible stereotype in “the West” about violent and irrational Islamic terrorists.

The three amigos of Canadian foreign policy, namely Baird, Marc Garneau and Paul Dewar, are confirming a pattern that those running our three main political parties do not want vigorous public debate on big issues of war and peace, life and death. Yet again, grave issues concerning Canada’s military and diplomatic orientation to the rest of the world are not to be put before the Canadian people in the form of genuine parliamentary debate. We Canadians are to be kept in the dark as much as possible about what is being done internationally in our name.

ISIL incorporates many of the same people that the Canadian government recently helped and lauded in overthrowing the of regime Muammar Gaddafi in Libya and in the unsuccessful attempt to implement regime change in Syria. Now ISIL is being set up to justify a major military intervention on the expanding eastern frontiers of so-called “Greater Israel.”

The Globe and Mail informs us that Canada’s contribution to the fulfillment of Oden Yinon’s strategic plan for the balkanization of Israel’s neighbours will initially include “six CF-18 jet fighters to take part in bombing sorties—similar to the contribution to NATO strikes on Libya in 2011…some special forces, organizational help and aircraft such as C-130 Hercules planes or Chinook helicopters.” Said Baird during the Iraqi Photo Op, “Canada will not stand idly by as ISIS continues to murder innocent civilians.”

Canada’s Parliamentary Democracy Is Being Sabotaged

Of course Baird, Dewar, and Garneau, the three amigos of Canadian foreign policy, were united in their shared support for the Israeli government’s killing spree of Gazan civilians earlier this summer. The breakdown of the effectiveness of Canada’s ailing parliamentary democracy was similarly put on full public display in 2011 in the lead up to the federal election. The Liberals and NDP backed the Harper government in its decision to join with al-Qaeda mercenaries in promoting the violent overthrow of Muammar Gaddafi’s pan-Africanist regime. The MSM together with Canada’s three main political parties colluded to see that the issue of NATO’s cynical co-optation of the Arab Spring did not become a significant election issue.

The decision of the Canadian government to back Islamic mercenaries in Libya planted the seeds of the military confrontation currently brewing in the Middle East. The layers of silence and misrepresentation surrounding the journey from NATO’s intervention in Libya to the War on ISIL raise legitimate fears that the world is being set up for some sort of major false flag terror nightmare like that which took place in September 11, 2001.

To this day neither the mainstream media nor mainstream politicians like Baird, Dewar and Garneau, have properly explained that al-Qaeda, the group blamed for 9/11, was assembled and armed by the CIA and collaborators in Pakistan to overthrow the Soviet-backed puppet regime in Afghanistan. The role of “the West’s” intelligence agencies in recruiting, arming, training, and funding al-Qaeda right up to and after the events of 9/11 does not easily fit the master narrative for public consumption in the Global War on Terror.

Trading on Amnesia and Media Disinformation

Now Justin Trudeau’s Liberal Party and Thomas Mulcair’s NDP Party have joined forces with Stephen Harper plus Canada’s war-promoting mainstream media in a bid to avert significant public debate before Canada gets involved in a military confrontation with ISIL. Accordingly, due diligence is not being done including by many parties, including the professional propagandists for aggressive war at venues like the Globe and Mail. The scope and depth of the misrepresentations they are disseminating are astonishing in their audacity.

Before being pulled into yet another one of Prime Minister Stephen Harper’s foreign adventures, Canadians have a right to know ISIL’s history. Before committing Canadians to military action, public officials including those in the opposition parties owe Canadians a clear explanation of ISIL’s background. Who has been funding the organization and why? Is ISIL being deployed as part of a psychological operation to justify the break up of Iraq as has long been called for by Israeli military strategists? Is ISIL now being built up and played to provide the pretext for a return to the script of regime change in Syria? Is this military muscle flexing by the usual suspects meant to be a prelude to pushing for the realization of Likud’s vision of a Greater Israel?

Is ISIL being branded as the new al-Qaeda? Is the sudden prominence of ISIL being manufactured to supply more compelling, high-tech imagery of all-purpose Arab Boogeymen in Black? Are we seeing an operation to stimulate and exploit heightened public fears in order to justify, for instance, yet further growth in military budgets, more police state incursions, and the further growth of an unrelenting surveillance state empowered to spy, often illegally, on the entire citizenry?

Why does ISIL’s leadership, which is reputed to have been trained by Israel’s Mossad, devote all its attention to exacerbating divisions within Islam and none at all to addressing the incursions of the Israel state on the Arab people of the region? Are Baird, Dewar and Garneau simply following orders delivered by some of the same people who seem to have played significant roles in organizing, implementing, covering up and exploiting the 9/11 debacle? Are we seeing the onset of another effort to stage manage events in order to advance the misapprehension that Israel’s regional enemies in the Middle East must always be understood as the overall enemies of “the West”?