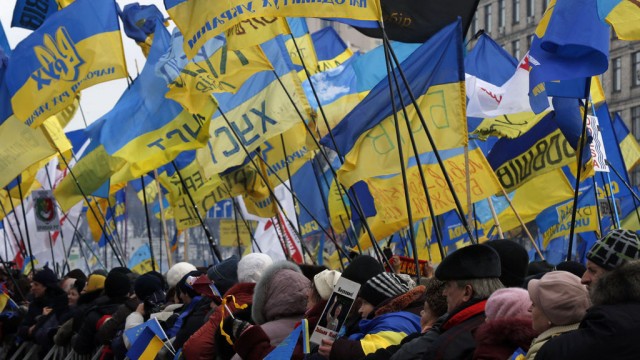 Five facts you need to know about Ukraine-EU trade deal

[ Editor’s note:  While this association signing will be claimed a victory, few will ponder what would have been possible without the overthrow of the government to get it.

Yanukovych did not kill the EU deal last year. He just objected to the EU insisting that Russia not be brought into the process, and here we just had Russia participating after all.

This had to be done for Ukraine to maintain at least some of its energy subsidies  [when the gas starts flowing again] and not lose favored nation status on exports to Russia, a major buyer of Ukraine products. Yanukovych actually wanted to work with both East and West, so as to derive benefits from both.

The EU’s deal on last year’s offer had no immediate cash in it, and Ukraine was already broke, only having been kept afloat by the Russian subsidies, which had included paying for its Black Sea fleet base rental in Crimea 20 years in advance.

Russia’s concern was that all its investment made while keeping Ukraine from bankruptcy would be gobbled up by the West, as it buried Kiev under in loans, and then foreclosed in the usual way the banksters so love to do.

One quick example was the GMO seed clause put into the first life raft loan to the post-coup government, a very strange top priority of a 28-nation block to put Monsanto’s interest at the top of the pile. It opened up all of Ukraine’s agriculture for the Monsanto monopoly… quite an insider coup.

Because of being right in the middle of a shaky ceasefire, Putin agreed to not make a big stink about the signing of this first agreement, like canceling Ukraine’s favored-trade status. The pipeline energy talks are a bigger priority for the EU, Kiev and Russia.

Russia wants to get paid, and what it will do on the other trade issues will depend on whether the EU wants Russia to eat the loans in return, which I think they will pitch.

The Russians seems to be betting the financial crunch from the counter-sanctions will put more political heat on some of the key EU leaders. Hollande is French toast. The Brits will be losing some of their “world power” gift-wrapping with the Scotland hit; and we are seeing a growing revolt against Merkel, the kind where her removal is beginning to be discussed as the only solution.

The anger is not just on the economic disaster that is being created after all the work by German business to stay the strongest economy in Europe.

They also do not like seeing Germany as part of NATO’s pushing Russia in to the corner in terms of conflict, triggering an even bigger disaster.

This will buy all next year (2015) to hopefully get the hostilities behind, work out some of the large gas-debt arrears; work out the protections Russia wants to maintain the benefits that Kiev needs to stay afloat; and the EU to not see defaults on its new loans within a few years.

When Ukraine’s debt crosses the 60% mark, Russia can exercise a call option on its last $2 billion loan.  It looks like it will be around 66% by year end. So Moscow is holding the bankruptcy card on Kiev, which would have the EU banks taking a big hit if the cards were played.

All the EU and Kiev have won so far is paperwork, and the initial IMF loan pissed away in a stupid attempt to crush East Ukraine… Jim W. Dean ]

Ukraine has signed the European Trade Association Agreement, the document that sent the country into a political frenzy when not signed eight months ago to this day. RT gives you the basics on how this will affect the economy of both from here on out.

The economic part of the pact signed between Ukraine and the EU will slash 98 percent of trade duties on the EU’s 28 member’s goods and 99 percent on Ukrainian products. The EU says it’ll give Ukrainian markets greater access to Europe which is expected to give the country an economic boost, including more trade and job creation.

Ukraine hopes it will lead to full – fledged EU membership one day, but EU ministers say that isn’t happening anytime soon. The treaty is a way for Brussels to gain political control over Kiev and in return, offer beneficial trade conditions.

Details on the transition period are such that Ukraine has 7-10 years to change product names already in use in the EU. Poultry from Ukraine will be regulated, as not to interfere with agriculture subsidies in the EU. Ukraine’s domestic auto industry will be protected by a 15 – year buffer period to catch up to the European competition. Ukraine must also meet EU requirements on product and food safety.

2. How does it change Ukraine’s trade?

Ukraine will save up to $500 million on lifted tariff and duty fees when trading with Europe, but it’s free trade access with Russia will be revoked. Before trade can start, Ukraine has to go through mountains of paperwork, tweaking laws and legislation to comply with EU standards; this will take time and money.

Russia has repeatedly said Ukraine cannot have its cake and eat it too. Its choice to join up with the EU instead of the Russian – led Customs Union will have economic consequences. No more free-trade, possible new tariffs, and definitely no more discounted gas.

Last year, Ukraine exported goods worth $16 billion to Russia, nearly 25 percent of all total exports. Ukraine exported $17 billion to Europe the same year. Russia has said it may be forced to block Ukrainian imports due to the fact they cannot vouch for their quality under EU law.

3. Will this help or hurt Ukraine’s GDP?

EU has one answer and Russia has another. The EU thinks in the long-run closer ties with Europe will bring Ukraine economic prosperity. Moscow predicts a short-term windfall of $30-40 billion in the next year. The EU says it will make up for any counter actions by Russia. Ukraine’s economy is predicted to fall by 5 percent in 2014.

Russia’s Committee for Civil Initiatives, a think tank headed by former finance minister Aleksey Kudrin, estimates Ukraine’s decision to sign the economic part of the agreement will cost the country $33 billion per year, or 19 percent of GDP.

Ukraine’s National Academy of Sciences and its Institute of Economics and Forecasting predicts up to $8 billion in losses from Russian trade. The Ukrainian currency, the hryvnia, has weakened to 11.89 against the US dollar, losing nearly 45 percent since January 2014, when it was pegged at 8.235 to the dollar.

A weak hryvnia could make Ukrainian goods more attractive in European markets, but a flood of European goods into Ukraine could also devalue products and hurt companies’ profits and revenue.

4. What are the costs for the EU economy?

The costs of Ukraine’s participation in the Eastern Partnership may turn out to be too high not only for Ukraine but also for the EU. That’s because the budget of the European Union has been calculated for 7 years ahead and does not envisage any extra expenditures, while Ukraine’s economy needs billions to revive its economy, as ITAR-TASS cites Sergei Kulik, Contemporary Development Institute Director for International Research.

The man was among the first to make a research on the consequences of the EU – Ukraine association for the EU budget. Currently Ukraine needs the estimated $85 billion to finance the current balance of payments deficit to ensure the economy’s stable development in 2015-2018.

However, development needs require financing by an order of magnitude larger than that, Kulik said. Ukraine needs “$190 billion until 2018 to recapitalize the national economy and $300 billion to overcome structural disproportions in the economy accumulated in the past 20 years,” the expert said.

The financing needs of Ukraine can be compared with the European Union’s massive cash injections to overcome the sovereign debt crisis in South Europe.

“…the figures show that the inclusion of Ukraine into the Eastern Partnership program is an unbearable burden for the EU,” Kulik concluded.

5. What about anti – EU movements in Eastern Ukraine?

Though Poroshenko was elected on a primarily pro-EU platform, not everyone in Ukraine wants closer company with the West. Violence in Eastern Ukraine continues along with the backdrop of the trade deal, as people there still consider the government in Kiev illegitimate.

If Ukraine is the ‘bread basket of Europe’, Eastern Ukraine is the center of industry and infrastructure. Donetsk and Lugansk are both southeastern regions where anti-government groups continue to fight. Together, these regions account for 25 percent of the country’s exports.

Steel, ships, nuclear power, metals, airplanes, autos, machines, refineries, and appliances are all manufactured in the historically Russian-speaking southeast. To export these goods to Europe, the Kiev government will need to make peace. Agriculture and service industry dominate business in the Western regions.