Press TV has conducted an interview with Jim W. Dean, the chief editor of Veteran’s Today from Atlanta, about the International Atomic Energy Agency’s surveillance cameras placed at Iran’s nuclear facilities. You can watch the 7 minute studio interview at Press TV here. 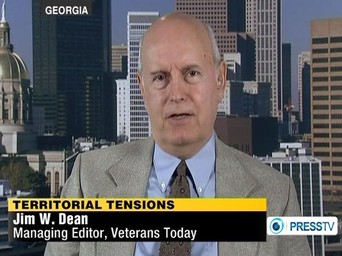 Press TV: Footage released regarding the level and depth of IAEA inspections when it comes to Iran’s nuclear energy program is one that is very revealing, would you not agree?

Dean: It is. Surprisingly, the West does not really know the story of the 100-percent report card that Iran has always had with the IAEA. They have never found anything out of place.

The typical Westerner has absolutely no idea about this because news about this is put on page 23 of most of the newspapers.

Press TV: Why is it specifically at a time when Iran is showing so much flexibility, so much transparency and so much cooperation with the P5+1 as well as the IAEA?

Dean: It has a lot to do with the compromising in the corruption of our media. Anything that is positive about Iran you have to really go to the alternative media to find out about. The mass media, they will put it on page 42 and so if you ask them they will say oh yes we actually covered that, but nobody really knows about it.

If it was not for Press TV and you doing what you do – because the alternative media feeds an awful lot of the stories that you put out and even those of us at VT, we would not know a lot of what we know if you were not publishing what you publish.

Press TV: Not just US mainstream Western media, but also politicians and Western leaders as a whole – Do you think there is that political will to show the world the true light and the true nature of Iran’s peaceful nuclear energy program?

Dean: We are kind of concerned about this because what we typically find is spun in the US news is just because they have not found or caught Iran doing anything, yet. It does not mean they are not sneaking or hiding something that we have not found yet, which is ridiculous. You have been in this process with the nuclear negotiations for over a year now.

But they have not because they have never had anything because Iran has never really had a nuclear program. It has been a hoax. And the intelligence community and more and more the military community are coming to realize this, that this has all been basically just a con game to heighten the public’s suspicion and fear.

And the public is getting very savvy now about how much money and how much effort is going in to fool them and hurt them into thinking a certain way, which has no basis in reality.

This is really helping us in the alternative media because they turn to us to try to find out what it is that mass media and these corrupt Western governments, what are they trying to fool us about?

Press TV: Do you think there is that pressure now added upon these Western governments as they come down and sit with Iran in the P5+1 negotiations in New York?

Let us not forget in the run up to these negotiations the US has used what many describe as its usual carrot and stick policy where it has expanded its sanctions and ratcheted up the rhetoric as well?

Dean: You always have the political situation with Obama that if everything is resolved with Iran, he is going to be attacked, no matter what happens, for rolling over on Iran and risking our security. So some of this he has to kind of play the tough guy to show that he got the best deal we could get.

But what the Americans are missing is that there are all of the EU nations, a lot of the multi-national companies, they are all waiting for the sanctions and the nuclear situation to be resolved so they can finish the contracts that they have already negotiated with Iran and they can ink them and they can start investing in Iran and your oil and your energy sectors.

So you have this crazy situation where the business community is already to rush into Iran and help build up its economy and yet you still have the political situation because of the Israeli lobby.

And we are in an election year and we are in a vulnerable situation where the Israeli lobby knows that November is just around the corner, and you have to throw us a bone and show our concerns are being dealt with. It is sad to think that a small country with just a small group of people has so much influence on all the rest of our lives.