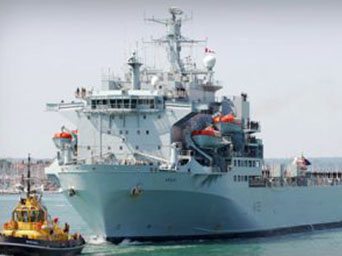 What do our clueless politicians care?

The indifference shown by Messrs Obama and Cameron to the slaughter and unimaginable destruction that Israel – the self-styled “only democracy in the Middle East” with “the most moral army in ther world” – inflicted on Gaza a month ago is beyond sickening.

In the UK a petition was raised, addressed to:

requesting them to send the ‘Argus’, a fully-fitted hospital ship of the Royal Navy lying at Falmouth apparently doing nothing. The petition said:

We have watched with horror the tragic loss of life & systematic destruction of infrastructure in Gaza. Despite the duty of care Israel continues to fundamentally restrict the flow of essential medical supplies, equipment and expertise into Gaza. A health crisis is looming in Gaza for trapped civilians, with dire conditions in the main Gaza City Shifa hospital. Doctors operate on the floor & in corridors. People die untreated. Only one x-ray machine is working with a lack of doctors, nurses, paramedics, and the most basic equipment. As David Cameron said in 2010 Gaza is a prison camp. It is unique among world conflicts: people are unable to get out & effective relief can’t get in.

The hospital ship RFA Argus is moored in Falmouth. She is uniquely designed for this type of necessity. Since Israel has abrogated its responsibility to the citizens of Gaza, we request that the British Government unilaterally and rapidly deploys RFA Argus to Gaza.

It’s the very least we could do, you might think. But ‘Argus’ hasn’t sailed. The port and docks authorities say she’s putting to sea on 3 October but not on the sort of expedition we’re talking about. I spent considerable time trying to speak to the Ministry of Defence press office, which didn’t even answer the phone on any of its numbers let alone say where she’s bound. Eventually I got through to ‘Argus’ herself but the officer onboard was not allowed to tell me her destination over the phone. OK, understandable.

Meanwhile, Lord Hylton asked in Parliament “whether the official National Health Service medical team promised by the Prime Minister has yet reached Gaza; whether volunteer British doctors have been refused access to Gaza via Israel; and, if so, what action they are taking on the doctors’ behalf”.

Baroness Northover for the Government replied: “A team of medical staff from the UK visited Gaza and East Jerusalem in August to assess the need for specialist medical support. A team was given access to Gaza via Israel to access medical facilities in both locations to assess capacity and recommend future UK assistance.” http://www.publications.parliament.uk/pa/ld201415/ldhansrd/text/140926w0005.htm#1409268000037

That’s not exactly true. Dr Swee Ang in an email tells how some of those NHS doctors who went to Gaza were refused permits by Israel to enter the beseiged enclave. When she and another surgeon arrived they were “detained in Ramle Detention Centre and deported the following afternoon”.

Over the years Dr Ang has devoted herself tirelessly to the Palestinian wounded. She worked to help civilian casualties in the Lebanese civil war and witnessed the Sabra and Shatila massacres. She was a signatory to the recent hard-hitting letter in The Lancet http://www.thelancet.com/gaza-letter-2014 by 24 senior doctors and scientists. It said, among other things…

We challenge the perversity of a propaganda that justifies the creation of an emergency to masquerade a massacre, a so-called “defensive aggression”. In reality it is a ruthless assault of unlimited duration, extent, and intensity. We wish to report the facts as we see them and their implications on the lives of the people.

We are appalled by the military onslaught on civilians in Gaza under the guise of punishing terrorists. This is the third large scale military assault on Gaza since 2008. Each time the death toll is borne mainly by innocent people in Gaza, especially women and children under the unacceptable pretext of Israel eradicating political parties and resistance to the occupation and siege they impose.

This action also terrifies those who are not directly hit, and wounds the soul, mind, and resilience of the young generation. Our condemnation and disgust are further compounded by the denial and prohibition for Gaza to receive external help and supplies to alleviate the dire circumstances.

Dr Ang in her email goes on to say: “I think an important point to raise is also to ask for an account of how the DEC money raised which I think amount to several million is going to be spent. Forty five clinics, fifteen hospitals, 8 fire stations and the main ambulance centre were destroyed in Gaza so please ask the British Government if they have discussed with the Ministry of Health of Palestine, if at least part of this money is going to help rehabilitate these health infrastructures. With more than 12,000 wounded among whom were those crippled for life, the one and only Gaza rehabilitation hospital which was flattened needs to be rebuilt urgently.

“The team who got in to make the assessment on 9 August had not addressed this, nor on how to help Gaza recover its medical system after this severe assault. Moreover the Gaza doctors have asked for us to support training their doctors especially in acute surgical specialties but with the block on our consultants getting permits, this is not going to happen. All the consultants applying to go are from major teaching hospitals and represent multiple specialties who are ready to teach, treat and transfer surgical and medical knowledge to doctors in Gaza. Several of them are well connected with the Royal College of Surgeons of England, and would be able to help establish quality education. But no permits!

“I can get further reports from the Ministry of Health of Gaza if necessary as the first British Team seems to imply that things were very much back to normal in Gaza which is not plausible given the degree of destruction…. The total wounded is now more than 12,000. The homeless figure lies between 200,000 to 400,000 depending on which report you read. The entire public health system has collapsed and needs rebuilding.”

Are Cameron, Obama and the rest of the ‘Coaltion of the Clueless’ (as Sharmine Narwani aptly calls them) going to embarrass us further with their cruel inaction when they could so easily use their leverage?

If ever there was a time to suspend or completely end the EU-Israel Association Agreement, this is it. Its terms require that:

Relations between the Parties, as well as all the provisions of the Agreement itself, shall be based on respect for human rights and democratic principles, which guides their internal and international policy and constitutes an essential element of this Agreement.

As someone else has already remarked, the dumb bastards can very rapidly mobilise bombs to pulverise Iraq and Syria, but not decent medical help for the children of Gaza.