Home World Take The Red Pill Before It’s Too Late

Ingsoc is the ideology of the totalitarian government of Oceania and Obama is the President of Oceania. We are all being watched, notes are being taken and dossiers are being completed as we speak. Oceania’s nominal leader Obama is also Big Brother, believed by the masses to have been the leader of the revolution and still used as an icon by the party. The personality cult is maintained through Big Brother’s function as a focal point for love, fear, and reverence, more easily felt towards an individual than towards a party or organization ~ and many are still drinking the Obama Kool-Aid. The only antidote for this poison is the Red pill and love: 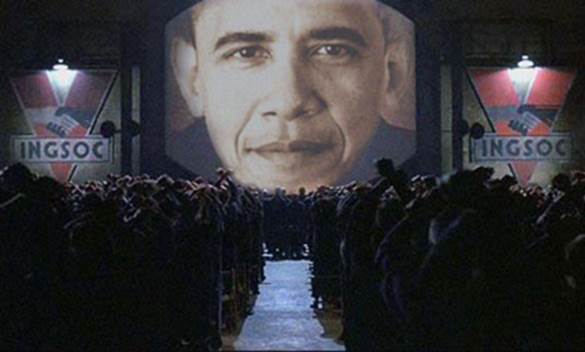 “Each act, each occasion, is worse than the last, but only a little worse. You wait for the next and the next. You wait for one great shocking occasion, thinking that others, when such a shock comes, will join with you in resisting somehow. You don’t want to act, or even talk, alone; you don’t want to ‘go out of your way to make trouble.’ Why not?-Well, you are not in the habit of doing it. And it is not just fear, fear of standing alone, that restrains you; it is also genuine uncertainty.”   Milton Mayer – They Thought They Were Free

The American people have been willfully bamboozled by the Obama administration and although millions suspect this ~ the majority are still drinking the Kool-Aid and swallowed the Blue pill. They have entered the Grey zone of existence where apathy and obedience to authority has replaced individual initiative and the ability to fully love. It is also a world of ego consciousness ~ where might makes right regardless of the collateral damage.

“The key to the behavior of subjects [willing to torture and kill on command] lies not in pent-up anger or aggression but in the nature of their relationship to authority. They have given themselves to the authority; they see themselves as instruments for the execution of its wishes; once so defined, they are unable to break free.” (Milgram, op., cit, p.185)

In this prison of fear and allegiance to authority, we have separated ourselves from a Unified Field of love and soul consciousness that lies not only beyond time and space but also beneath our deepest fears.

We must realize that love is the ultimate act of surrender ~ a rabbit hole to another universe or state of consciousness as well as the inner realization that we all have a part to play in a loving plan and our time to act is now. The ego is shed like an union skin as we take responsibility for our individual part in a loving plan in action ~ which is also God.

As such, the Red pill is the unvarnished truth but the ultimate truth is love, the ultimate life force ~ an evolutionary process with which we all participate as co-creators.

Politically I had once taken the Blue pill in 2008, participating in town hall forums with the thought that my participation could really make a difference and even banging a drum on election night at Andrews Hall in Sonoma Valley as hundreds of Sonomans celebrated Obama’s  dramatic victory ~ before I soon realized that I was seeing Obama as an agent of change ~ when in reality he was the Manchurian candidate for the status Quo as well as the principle apologist for the flagrant abuse of power of the Cheney/Bush Administration.

I can still vividly remember the giddiness I felt thinking my voice and participation was making a difference when in reality ~ I was being used as one of many sheeple who saw Obama as their answer for needed change ~ when in reality he was the global elite’s last chance to achieve a New World Order with Obama as its figurehead and the military Industrial complex and global financial elite firmly in control.

I had to see it for myself ~ I had been drinking the Obama Kool-Aid but soon the true reality of the suffocating matrix became clear to me so I was offered and swallowed the Red pill ~ and began to write from a place of clearer eyes, truth and greater clarity.

Here’s how things look from the Blue pill perspective ~ particularly in terms of our present accelerated military action in Iraq and Syria versus ISIS.

Someone who chooses to remain ignorant in order to be happy, much like those who chose the blue pill in The Matrix ~ whose false reality is what they watch on Fox news and CNN ~  taking the easy way out, as an uninvolved spectator, and choosing to ignore harsh reality and live in blissful ignorance and apathy.

The blue pill is a painkiller, much like oxy/Roxy codeine pills that keep you in your world of illusion, taking the pain away from the realities of life. It’s codeine, tar, powder, hard – anything that keeps your mind subdued and heart in prison.

“You take the Blue pill — the story ends, you wake up in your bed and believe whatever you want to believe.” Morpheus, The Matrix

In the first Matrix movie ~ taking the Red pill opens the soon-to-be Neo’s eyes to the fantasy that he had been living in. Morpheus says to Neo “You have to understand that many people are not ready to be unplugged, and many of them are so inured, so hopelessly dependent on the system that they will fight to protect it.”

Contrast that with taking the Blue pill. If Neo would have taken the blue pill, he would have stayed within the Matrix and been blind to reality.

Morpheus offers pre-Neo Keanu to take the Red pill. As Neo reaches for the red pill Morpheus warns Neo “Remember, all I’m offering is the truth. Nothing more.”

But once again, the ultimate truth is that we are all living in an inter-connected world where the abuse of power and accesses of the global elite and Military Industrial complex are becoming more obvious as well as the private agendas of the global elite ~ but this is also a world that is increasingly feeling its innate urge to unite, which happens to also be the  principle property of the Unified Field as well as evolution.

For example, we are now living is a Blue pill world where corporations are considered legal “persons,” but not Muslim detainees in Guantanamo. See NY Times Opinion piece  on Who Are We ?

“WHO is a person? How do you qualify for basic human rights? What is required for you to be able to speak or worship freely or to be free from torture?”

But the wheel of justice is slowly turning ~ Witness today, Sweden’s new center-left government has decided to recognize the state of Palestine, the new prime minister, Stefan Lofven, said during his inaugural address to Parliament on Friday. Sweden will be the first major state of the European Union to recognize Palestine, although some East European countries did so during the Cold War, before they joined the union. See article ~

Remember, what the Global elite is deathly afraid of is quite simply ~ the angry masses, and particularly the Internet, armed with the Truth. For that is a power that has historically toppled empires and trampled pretense.

Tony Blair’s justification of our illegal war and economic rape of Iraq as “Protecting our way of life” is the perfect example of the pretense and hubris of the West which will soon be joining the dust of history. 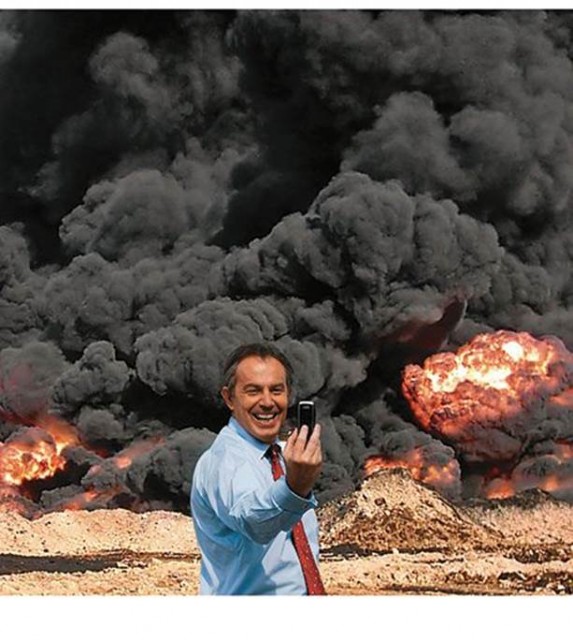 Here Tony Blair grins for his photograph as he holds up his smartphone to take a selfie in Iraq. He’s delighted with himself and what he’s done. Behind him, black smoke and hellish flames bloom over an arid landscape. To many people, this grotesquely comic moment says it all ~ only Blair would think that’s a good photo opportunity. To me, it’s a selfie of the devil himself admiring his handiwork.

The arrogance of the West is now clearly visible to the world and in the process of self-destructing in Syria. Their panic is obvious as seen in both President Obama’s and UK Prime Minister David Cameron’s recent speeches to the UN where Obama blatantly waved and attempted to justify (through lies) the long war banner and Cameron echoed his predecessor Blair’s hubris by literally saying It’s our way or the highway and no resistance will be tolerated if not removed and considered aiding the enemy ~ as brilliantly reported in VT;

“Perhaps most telling of all is that a new terrorist entity, the Khorasan group, has been invented out of thin air in order to claim that it poses an “imminent threat” to the United States in order to justify American strikes and regime change in another nation without securing the permission of the UN Security Council ~ because one nation may attack another under the Charter of the United Nations only if it has permission from the Security Council ~  “unless it confronts an ‘imminent threat’”. So between David Cameron and Barack Obama, we see the depths of depravity to which the West will sink in order to attack Syria.”  See article ~

The United States is just over 230 years old and is now firmly entrenched in the seventh stage of all Empires (Apathy) with only Dependence and eventually Bondage ahead of it.

The Islamic State (ISIS), much like Al Qaeda, is a made-in-the-USA product, an instrument of terror designed to divide and conquer the oil-rich Middle East as well as eliminate Syria’s regime and counter Iran’s growing influence in the region.

Apathy is the glove into which evil slips its eager hand and only the Red pill and love can remove its deadly presence from our lives ~ for only then will we be seeing clearly through different eyes and finally recognize our innate power as well as our part in a universal loving plan whose principle property is the universal urge to unite.

Remember, taking the Red pill, as Morpheus warns Neo in the Matrix, is an obedience to and “awareness of the truth. Nothing more.”

TAKE THE RED PILL BEFORE IT’S TOO LATE

“Luckily, there is a Fifth Estate, The Fifth Estate exists in the ether. It’s not susceptible of government, of corporations, or advertisers or military control. It’s free. That is very dangerous to people who like to make secrets and to make secret operational things. It’s a huge threat. And the Empire – the Goliath here – is being threatened by a slingshot in the form of a computer and a stone through these emissions thrown into the ether to our own computers.” Ray McGovern, of Veteran Intelligence Professionals for Sanity.