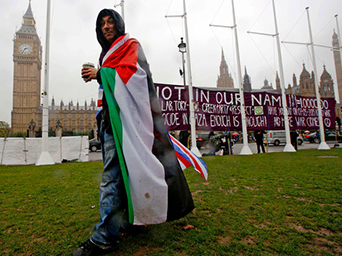 UK MPs blow a ‘raspberry’ at Netanyahoo and his serfs

Despite all the veiled threats and the loony posturings of the pro-Israel lobby, Parliament voted 274 to 12 on Monday to recognise Palestine as a State.

The motion, as amended, read: “That this House believes that the Government should recognise the state of Palestine alongside the state of Israel as a contribution to securing a negotiated two state solution.”

The Cameron-led coalition government will no doubt continue to tug the forelock and cuddle up to Israel but, clearly, the Israelis have no veto in the British parliament. There is a different mood among MPs now. The pro-Israel juggernaut has been stopped in its tracks and Netanyahoo needn’t think he’ll get a US Congress-style standing ovation here… a right, royal ‘raspberry’ more like.

There are those who dismiss the vote as a futile gesture, pointing out that more than half the MPs stayed away and it’s a non-binding result anyway. Nevertheless, it was a very well aimed shot across the bows of our misguided and increasingly delinquent government. It was a warning to get a grip on the reality of the situation and somehow retrieve their moral compass. It was a reminder that they must accept Britain’s responsibility for the century-long misery in the Holy Land. And it was a clear instruction from the representatives of the British people to act with honour and decency towards those whose future we still have in our hands.

Many MPs, however, were a great disappointment, my own included. Having written to me that he was looking forward to discussing “one of the most important issues to regional and global security on 13 October” and would “continue to support Palestinian statehoood”, his name was missing from the voting list at the end of the debate. Shame on him.

I suspect many were absent because they were fearful of voting ‘No’ and exposing themselves as utter scoundrels, and terrified of voting ‘Yes’ and having to face the anger their unscrupulous backers, and perhaps forfeiting vital campaign funds.

Agent Cameron’s men were present. Sir Hugh Robertson, who until a few months ago was Minister of State for Foreign and Commonwealth Affairs, insisted that the Kerry peace plan remained “an excellent basis for restarting negotiations”, despite its pathetic failure. “We need to freeze the situation on the ground and buy some time for the negotiations… The international community lacks the will to bulldoze £1 million houses built illegally in settlements. We will have to form a new border, probably based on the wall, and then deal with the settlements beyond it if we are to make any progress.” What? Why bulldoze? Why move the internationally recognised border? The Palestinians inherit all homes illegally built on their land. If Israelis want to stay in them they’ll have to become Palestinian citizens. They’ve known that all along.

The Government’s latest bright young thing, Tobias Ellwood (Parliamentary Under-Secretary of State for Foreign and Commonwealth Affairs), announced that bold political steps were necessary to stop the cycle of violence once and for all. Of course, he didn’t mention the most obvious ones.

Gaza must also have an economic plan, he said, though how Palestinians could implement such a plan while strangled and imprisoned by belligerent invaders wasn’t explained. He argued for open borders to goods and people to allow greater connectivity between Gaza and the West Bank. Yes, Mr Ellwood, the ‘big guns’ in the West were arguing for exactly that back in 2005 and again in 2012, and we’re still waiting.

“I fully support the announcement by Baroness Ashton yesterday,” he continued, “in which she said that the EU is analysing the feasibility of a maritime link that could open Gaza to Europe. I discussed that issue with my Palestinian and Israeli counterparts when I was in the region last week.” Hey, Mr Ellwood, I wonder what your Zionist pals said the that?

“It is crucial that the Palestinian Authority return to Gaza to provide services and security,” he said, meaning that hated outfit run by Abbas and his Fatah thugs, presumably. Why, when the Palestinian people elected Hamas in fair and square elections? Are you suggesting, Mr Ellwood, that they forego their democratic rights and embrace the very set-up that enforces the illegal occupation on behalf of Israel and America in the West Bank?

“The Palestinian Authority must also show leadership, recommitting themselves to dialogue with Israel, and making progress on governance and security for Palestinians in Gaza as well as the West Bank.” And how do you propose they do that, Mr Ellwood, without the enforcement of UN resolutions and international law? Not a single mention of that cruicial pre-condition.

To think he gets paid for spouting this tosh!

‘Go away and implement the motion,’ minister told

So now for some common sense remarks, courtesy of Andy Slaughter… “I have heard two views in opposition to the motion. The first is from people who have no intention of ever recognising the state of Palestine — unfortunately they include the leadership of Israel at the moment. This view
used to come just from people such as Ariel Sharon, but now it comes from Naftali Bennett, the Minister with responsibility for the economy, Avigdor Lieberman, the Foreign Minister, and the Prime Minister himself, Binyamin Netanyahu. Bennett has said, ‘I will do everything in my power to make sure they never get a state.’ Those views are articulated publicly in Israel now because people are emboldened by their own actions and by the international community’s failure to do anything about them.

“Who can defend settlement building — the colonisation of another country? We are talking about 600,000 Israeli settlers planted on Palestinian soil. I disagree fundamentally with the right hon. and learned Member for Kensington (Sir Malcolm Rifkind), who said that Gaza was no longer under occupation. It is under occupation; the life is squeezed out of it daily from land, sea and air. Anybody who has visited the West Bank and not come back thinking that it is an apartheid system has their eyes closed. The daily indignities suffered by the Palestinian people there would make many people rise in rebellion…”

But I’ll leave the last word to the eloquent Sir Edward Leigh. “My other Damascus moment came when I was standing at the Bethlehem checkpoint and saw the appalling humiliation heaped on Palestinian people. I spoke to a nurse at a hospital I visited as part of a charity I ran. She lived in Bethlehem, just a few miles from Jerusalem. It was just a short walk away, but she was never able to go to the city without enormous difficulties. Bethlehem, of all places, should be a beacon of hope.

“I know we will be accused of making a gesture today and I understand the Government’s position, but they should listen to the voice of this House. Virtually everybody who has spoken — not just lefties waving placards in Trafalgar square, but virtually every Conservative MP — has said that now is the time to recognise the justice of the Palestinians’ case…. We have to recognise, however naive this may sound, that we are part of a common humanity, whether we are Christian, Jew or Arab. When we vote tonight — and I will vote for the motion — we will be making a gesture in favour of that common humanity, and we should be proud of that.”

The debate was secured and the motion skilfully put by Grahame Morris, Labour MP for Easington, a mining constituency in County Durham. Winding up, he said: “It is a rare occasion on which the House speaks with one voice, as I think it has this evening…. I want to impress on the Minister… the need to reflect on the debate. The will of Parliament has spoken tonight. It is the right thing to do to recognise Palestine and I hope that he will go away and implement the motion.”

Palestinians everywhere, and all campaigners for justice, owe Grahame Morris grateful thanks.