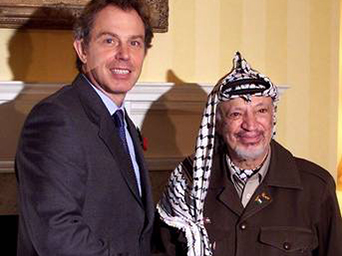 On his first visit to the Court of St. James on January 26, 1998 with Tony Blair as his host, the British asked Yasser Arafat what was his wish as the Palestinian leader. Well, you guessed it, Arafat asked the British to “train his security forces”.

This is the only wish that Arafat as representative of the Palestinian people had on the occasion of his first visit to a county that is guilty as charged. Arafat knew his support base is the militias and thugs he brought with him when he returned to manage the Jewish Occupation. His concern was his power base, not the millions of people he supposedly represent.

Intoxicated by such occasion, he forgot about the millions of Palestinians he represents, who had to flee their homes in 48, who are made exiled and refugees as a result of the British Mandate and its deliberate policy of ethnic cleansing of Palestinians and empowerment of the emerging Jewish terrorists state in Palestine.

Instead of asking for compensation and reparations for the millions who lost every thing, Arafat very excited about being in London forgot all about this and the only thing he could come up with on such a historic occasion was to “train his security forces”.

When I see the support that Arafat had received from the Palestinian Diaspora, I know what kind of a leader Arafat is, but it makes me wonder what kind of people we are to accept such a stupid, incompetent, liar, corrupt, criminal and a fraudulent leader for so long.

Now the Palestinians and the Ramallah leadership are so excited about the vote in the British Parliament in support of recognizing a Palestinian State, vote that took place couple of days ago. Of course the vote is symbolic and non-binding and means nothing at all. At best, while appreciated it’s a stiff “schnapps” for the guilty conscious of the British who are the real criminals no different than the Nazis. While the Nazis had a “final solution” to the Jews, the British made the Palestinian suffer a perpetual nightmare with no final solution.

Millions lost their homes, hundreds of thousands lost their lives and continue to do so till today with no hope insight. Mahmoud Abbas the successor to Arafat as the head of corrupt, inept PLO is no different from Arafat. He announced that he will not seek a return of the refugees, and if there is a financial restitution it will go to the coffer of the PLO leadership to take its cut before it is distributed to the people. Certainly England will never be held responsible for its crimes in Palestine.

Of all the people in the world, the International Quartet could not have a selected a worst person than Tony Blair to be its representative the man who represent every thing repulsive and criminal of British politics and criminal behavior.

The Palestinian people should hold England responsible for their exile, perpetual suffering and should seek damages no different from damages paid to Israel by Germany. The Palestinians should also put on trial such an incompetent inept political leadership and should put Arafat on trail posthumously. The man was nothing but a fraud and a lie.