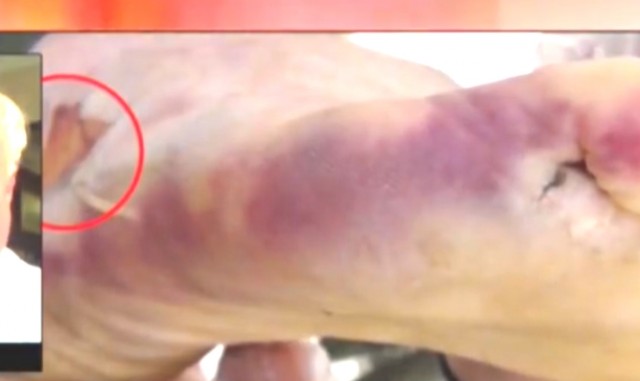 [youtube VUfgoT9jgRM&list=UUaMH8-gD-ZYyC93vY6GlnCQ]
An analyst says the Takfiri ISIL terrorist group has used US-made chemical weapons in a series of chemical attacks across Syria. Gordon Duff, a senior editor at Veterans Today, said in an interview with Press TV that the chemical weapons being used by the ISIL “are made in the US-owned labs outside Tbilisi, Georgia.”

These chemical and biological weapons are then shipped and moved by the CIA-run networks through their regional allied countries into Syria, Duff said. He strongly criticized the Western government for their “desperate silence” over the issue, saying they have “done nothing” to stop these shipments.
The remarks come as pictures of Kurdish fighters killed in battles with the ISIL militants suggest that the terrorists used chemical weapons against Kurds in the Syrian border town of Kobani.
The pictures show burns and white spots on the victims’ bodies, while there are no visible injuries or external bleeding. Kurdish activists had earlier said the ISIL militants attacked them with chemicals in a village near Kobani.
Duff said that the ISIL was now capable of developing weapons of mass destruction (WMD) and the terrorist group was also looking for certain scientists who could develop dangerous “dirty bombs.”

“They are holding nuclear materials, which they picked up form [the Iraqi city of] Mosul. We know they can make chemical weapons in facilities there as well,” he said.

The political commentator said that foreign-sponsored terrorists have used chemical weapons three times – once near Aleppo, a second time near Damascus, and another time in Homs – in recent years.
Meanwhile, the Syrian ambassador to the United Nations has accused Turkey and Saudi Arabia of providing WMDs for the terrorists operating inside his country.
Bashar Ja’afari told a UN committee on Monday that Ankara and Riyadh are involved in giving chemical weapons to the militants, adding that Turkey supports over 100 terrorist groups in Syria.