(San Francisco) The American EPA, Environmental Protection Agency, is the big agency of the federal government tasked with monitoring and issuing timely reports about harmful levels of radiation to the American people. Well, that is the theory, anyway.

From the EPA website “The gamma data measures radiation from all radionuclides that emit gamma rays and splits them into ranges of energy. The word gross, or total, indicates that the measurement is from all gamma emitting radionuclides. Not all gamma rays have the same amount of energy. Breaking the data into discrete energy ranges helps scientists to determine which radionuclides may be present.” EPA, Oct 29, 2014 Billings Montana. http://www.epa.gov/japan011/rert/radnet-billings-bg.html

Here is one of their reports on Billings, Montana. It is of Gross [Total] Gamma Radiation. This was published Oct 29, 2014. There are Nine Gamma Radiation Ranges displayed.

Counts Per Minute  The number of decays of radioactive material that are detected in one minute. – From RadNet CDX Manual Glossary

This is the EPA Scatter Graph of Gamma Radiation Range Seven. 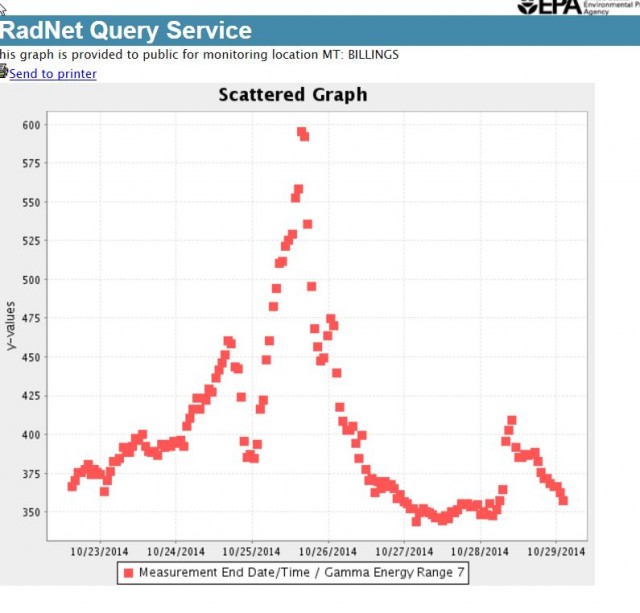 From the EPA Website: “… During a radiological incident, RadNet data can be used to confirm that no excess radiation is present in an area or to help decision-makers decide whether appropriate actions need to be taken to protect the public. ” [Emphasis added.]

The “or” above from the policy statement above is what is called Troubling Government Gobbledy-Gook. In other words, to me they are saying if radioactive Alerts should be announced they will not announce them but let “decision-makers” decide. This hush-up policy really, really stinks. Chicken-hearted, dipstick “officials” are not what is expected here. Get somebody who will stick to the objective science and let the chips fall where they may.

NETc is the acronym of Nuclear Emergency Tracking Center. It is a private organization and uses EPA data as well as their own data. The shape of the graphs is similar; however, in this instance the peak radiation recorded by NETc.com is higher. The EPA displays a peak in Billings of 596 CPM while NETc shows 993 CPM. The cause of the 397 Point difference is unknown.

The 250 to 397 CPM difference is consistent throughout the Five day time period. It is doubtful it will be resolved by me or VeteransToday.

The EPA has a history of simply removing radiation monitoring units from service during high radiation events. The EPA is tainted by previous bad acts and depraved indifference.

NETc is a new reporting service at this point. Their [NETc’s] actions will tell the tale in the next few days and weeks. You make up your own mind based on the best available information. I know I will.

HOW HIGH IS HIGH?

When the radiation starts to liquify your internal organs that’s the end of the line. At what point, short of that, is action called for is the question. CPM is a measure of detected radiation decays per minute and can help us determine when to leave an area.

Many people are still living in areas devastated by radiation and cannot readily leave. Officers and enlisted soldiers, sailors, airmen and Marines are (some people in this category) among those affected.

We know not to stick our hand in boiling water. Gamma Radiation Range Seven is a clear sign the water is hot or boiling. Gamma radiation measurements are objective proof of a dangerous elevation in Gamma Radiation with respect to Background and sufficient to take protective countermeasures.

Things are not going to get any better; in fact, the existing new Rad becomes more lethal for 35 years. The Lethality is then reduced very gradually over many millions of years. A solution in millions of years is no solution at all now.

Copyright by Bob Nichols 2014. All rights reserved. Distribute with credit and all Sources and Notes. Contact Bob Nichols at [email protected]

2. Nuclear Emergency Tracking Center – “Netc.com is an Early Warning Radiation System that takes data from private radiation monitoring stations and EPA network and creates a RBL ( Radiation Background Level ) for each 3000+ stations everyday.” Disclosure: Bob Nichols has a paid Chart Membership to Netc.com. The cost was $19.95.

5. Microbes and Malignancies, Infection as a cause of human cancers, edited by Julie Parsonnet. Amazon, http://www.amazon.com/Microbes-Malignancy-Infection-Cause-Cancers/dp/0195104013

1. Fukushima Equals 6,000 Hiroshima Bombs Today, More Tomorrow “You are going to have to make your own choices. You will live a little longer, or, die sooner by these choices, as will I. No one is exempt…”

2. Al Gore Lied, “All that was necessary was to, literally, fool most of world. That and intimidate the rest. All people had to do was “To Believe;” or, at least not speak up …”

3. Sterilize the Planet Arrgghhh! There is no way out! No cure. No medicine. We bought the farm and the cheap energy fantasy, too.

4. All Nuclear Reactors Leak All of the Time, – Treat the Nuke Boys like the Mad Dogs They Are

5. I Spit on Your Grave, Pro-Nukers lie to everybody else (Normals) and by agreement reduce the effective dose absorbed of Radioactive Hydrogen made by Reactors and Atomic Bombs 906 Billion Times – all the while looking you right in the eye.