Israeli PM Benyamin “Bibi” Netanyahu is suddenly embroiled in controversy – over the two biggest unsolved murder cases in American history. First, a cartoon in Haaretz, Israel’s liberal flagship newspaper, depicts Netanyahu as a kamikaze pilot flying a jetliner into the World Trade Center. Then Netanyahu, angered at being called a “chickenshit,” snarls out a threat to Obama referencing the famous Grassy Knoll from whence JFK’s brains were blown out. 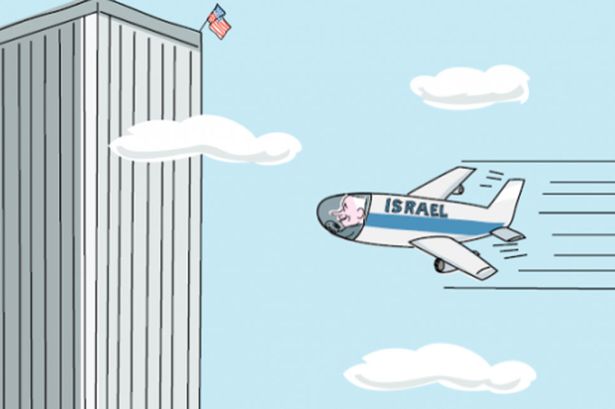 What in tarnation was THAT about?

It seems that the insane war party (the neocons) and the relatively restrained war party (the realists) are trading threats – by referencing the two most infamous (and most obviously true) “conspiracy theories” of the 20th and 21st centuries.

The Netanyahu-as-9/11-pilot cartoon was the realists threatening “chickenshit” Bibi. They had already told him he was too chickenshit to start a war, and too chickenshit to even think about making peace. The cartoon was a not-so-subtle reminder: “Any time we want, we can reveal the truth about 9/11 and have you and your neocon friends and assets hanged from a thousand lampposts.”

Bibi responded with his “grassy knoll” reference – yet another threat to Obama’s life, like Jewish Times editor Andrew Adler’s calling on the Mossad to assassinate Obama, and the various White House “intrusions” that have showed the President cannot be protected from the world’s biggest and baddest international crime syndicate.

It isn’t just that Barrack and Bibi REALLY hate each other (though they obviously do). It seems there is an ever-widening gap between the neocon chickenhawk loonies lined up behind Bibi, and the grownups in the room including POTUS and handlers.

And Bibi seems to be the one who is self-destructing…

…by turning into a cartoon character…

…a sort of not-so-wiley Coyote.

First, the Netanyahu toon “bombed” at the United Nations. 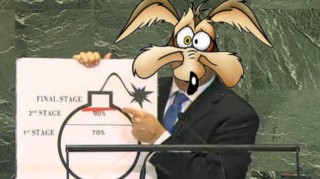 Now he’s flying a 9/11 plane into the Grassy Knoll.

Whatever will Bibi think of next?

Let’s imagine Bibi decides to really, truly fly a 9/11 plane into the Grassy Knoll – by arranging another JFK-style assassination of the President of the United States, as Andrew Adler suggested in that heart-warming editorial. Bibi’s hope would be that Joe “I am a Zionist” Biden would be another LBJ – a treasonous psychopath who in 1967 conspired with the Israelis to help them steal Jerusalem and murder the USS Liberty sailors. If Joe Biden were like LBJ, he would help traitors kill the President, then conspire with the Israelis to enable a newer, bigger 9/11-style false flag followed by war on Iran.

But Biden isn’t LBJ, and the grownups in the room aren’t likely to let that happen. An Obama assassination would more likely backfire, causing the already strained US-Israel relationship to snap.

Netanyahu’s reference to the grassy knoll is just the latest in a series of high profile “conspiracy theory” references by neocon assets in politics and media. First there was David Cameron saying that nonviolent extremists such as 9/11 truthers are as bad as ISIS and must be dealt with the same way. Then Canadian reporter Brian Lilley coined the phrase “terrorist truthers” equating truth-telling with blowing people up.

[Legal notice to Brian Lilley: Since I trademarked the expression Truth Jihad, every time anyone uses a phrase like “terrorist truther” they have to send me a dollar.]

Is the sudden rash of “conspiracy” references part of some new neocon agenda?

All three threats included the implication “we can kill people and you’ll never know for sure what hit you.” Cameron and Lilley were saying (between the lines): “We can commit huge crimes like 9/11 with impunity – and if necessary kill or imprison the people who tell the truth about them.” This message reiterates Obama’s former Zionist information czar Cass Sunstein’s assertion that some day it may be necessary to outlaw conspiracy theories, but in the meantime the government should “disable the purveyors of conspiracy theories” by means including “cognitive infiltration.”

Netanyahu’s grassy knoll reference likewise alludes to high-level conspirators’ ability to cover up their crimes. The “grassy knoll,” in popular culture, connotes conspiracy-theory confusion…resulting in perpetrator impunity. In mainstream culture controlled by mainstream media, nobody will ever know for sure who killed JFK or who orchestrated 9/11, and all discussion of such topics is just more “grassy knoll” theorizing.

So all three neocons were bragging/threatening: “We can blow up skyscrapers and murder presidents, and if you try to stop us, we can confuse you and if necessary ‘disable’ or imprison you.”

But such brags/threats would not be necessary if the neocons were feeling secure. The three conspiracy blurt-outs are a tribute to the efficacy of the truth movement – and a symptom of neocon fear. The noose is tightening around their necks, so they are shrieking louder and louder that they are above the law and will never, ever get caught.