The resurrection of Eisenhower’s lost Columbine Two is somewhat parallel to his almost forgotten presidential farewell speech of 1961 where he prophetically warned of the dangers of an out of control Military-Industrial complex which he helped create and we are now directly experiencing 53 years later:

“In the councils of government, we must guard against the acquisition of unwarranted influence, whether sought or unsought, by the military industrial complex. The potential for the disastrous rise of misplaced power exists and will persist.” President Dwight Eisenhower 1961 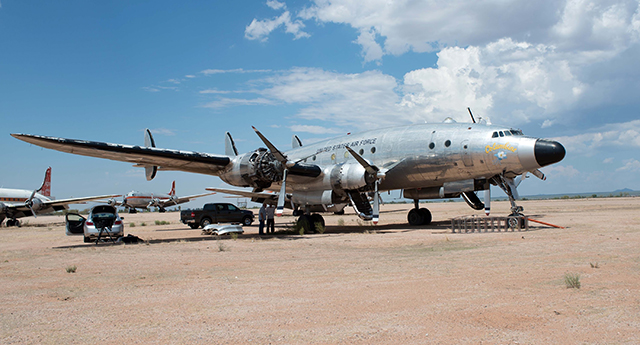 All of Eisenhower’s warnings in his 1961 Presidential address have come true but now we are dealing with a Military-Industrial-Congressional complex of immense size and added danger to our Republic ~ which should become obvious to all in the upcoming mid-term elections.

In other words, the Military-Industrial-Congressional Complex is real, And it’s bigger and more dangerous than ever in 2014.

President Eisenhower was ridiculed as a conspiracy theorist for his famous remark about the “military-industry complex.” But Edward Snowden’s leaks have reminded us it’s real, it’s bigger and more wasteful than ever, and its bloat can even threaten our national security.

As John Avlon writes in The Daily Beast ~ ” Snowden wasn’t the danger Ike imagined in his Farewell Address, given from the Oval Office in the predawn of the computer age. Some might argue that Snowden represents the “alert and knowledgeable citizenry” that Eisenhower said would be the best check on the interests of military-industrial complex. But there is no debate that Ed Snowden’s unlikely access to the nation’s security secrets in the first place is a reflection of the overextended partial privatization of our intelligence operations. This is what Ike explicitly warned about more than a half-century ago: “We must guard against the acquisition of unwarranted influence, whether sought or unsought, by the military-industrial complex. The potential for the disastrous rise of misplaced power exists and will persist. We must never let the weight of this combination endanger our liberties.” See article:

Eisenhower would likely be appalled by the size of the industrial and governmental workforce committed to war or counter-terrorism activities. Military and homeland budgets now support millions of people in an otherwise declining economy. Hundreds of billions of dollars flow each year from the public coffers to agencies and contractors who have an incentive to keep the country on a war-footing ~ footing the bill for an eternal war on terror which has now become the never ending war of terror.

The 2014 midterm election will change nothing in the United States ~ 2014 is set to be the most expensive non-presidential election in US history and unfortunately money buys elections. Not only do politicians do the bidding of the wealthy, they themselves are increasingly numbered among the rich and super-rich and they follow their corporate masters.

Whoever is elected is indebted not to voters but to the special interests that provided the campaign money. Once elected the official serves the private interest groups that put the official in office. In America the government can be bought and sold just like everything else. In its Citizens United ruling, a Republican Supreme Court put its stamp of approval on the right of corporations to purchase the US government: Paul Craig Roberts

The American dream has vanished ~ Mike Whitney explains the 15 documented reasons why most Americans rightfully feel we are still in a recession . See article

Social inequality rules in America and the 2014 midterm election has been reduced to Kabuki theater as millionaire Republicans and Democrats rearrange the chairs on the deck of the sinking Republic while the main stream press tries to convince us that it all really matters. See my article in Veterans Today

From 1953-1961, Eisenhower, as Commander in Chief and through Secretary of State John Foster Dulles and his brother, CIA Director Allen Dulles, they constructed a nascent military-intelligence-law enforcement-industrial complex influenced by Nazi ideology and technological know-how. No wonder IKE warned the American people about his creation, the military-industrial complex ~ he had created a Frankenstein and he was forewarning us of what evil mischief it was capable of.

“At one time in the early 21st Century it was uncomfortable to call out America’s ties to the Nazis. But that has changed particularly with the release of Eric Lichtblau’s The Nazis Next Door (2014) and “The Collaboration” by Ben Urwand. It has also been confirmed by the overthrow of a nationally elected leader in Ukraine ~ Victor Yanukovych ~ and the open support of neo-Nazi groups largely responsible for that event. Is it a coincidence that the head of the CIA, John Brennan, visited with the neo-Nazi usurpers not long after the coup given the CIA’s history?”

See article ~ Modern Day America: One Step Away from the Third Reich

The only way we can kill this Frankenstein is to stop funding it ~ as such, the most important under reported and ignored political event in the United States at the present time continues to be the Move To Amend movement ~ where scores of resolutions urging the overturning of Citizens United have been introduced in state legislatures ~ and sixteen such resolutions have now passed .

“We need a massive grassroots movement to have state after state, and we have, I think, 16 of them already on-board saying, we support a constitutional amendment to overturn Citizens United. I think there’s something like 500 communities around America saying the same thing. Then when we do that, we move to public funding of elections. You want to run? I will not be able to outspend you:” Bernie Sanders to Bill Moyers