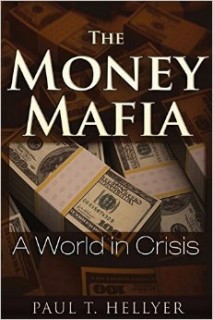 A review of The Money Mafia: A World in Crisis by Paul Hellyer

Paul Heller has held high-level posts in the Canadian government. During the 1960s as Defence Minister, Hellyer oversaw the unification of Canada’s armed forces, and in 1968 he nearly became Prime Minister.

Then in 1973 David Rockefeller created the Trilateral Commission to put an end to the “excess of democracy” that had allowed truth-telling independent-minded people like Hellyer to rise to power. As the New World Order tightened its stranglehold, Hellyer became one of Canada’s leading critics of globalization.

By the late 1980s the Liberal Party was coming under bankster control. In response, Hellyer created the Canadian Action Party – one of the few genuinely alternative parties in Western political life.

Then in 2005 Hellyer made headlines by stating: “UFOs are as real as the airplanes flying overhead.” It was the first time anyone of G-8 cabinet rank had ever publicly confirmed the alien presence on Earth.

Mainstream readers will have no problem with Hellyer’s suggestion that carbon-driven climate change is everything Al Gore thinks it is…maybe even everything James Lovelock used to think it is. But they may balk at accepting his claims about the NWO and UFOs.

Most Veterans Today readers, on the other hand, will probably have the opposite reaction. As Hellyer says, when he appears on alternative radio shows, audiences agree with him about the NWO and ETs but have a hard time swallowing “global warming.” The problem, of course, is that the NWO-forged mainstream consensus is lying about everything else, so why should we believe its alarming claims about climate change?

Hellyer’s response is that this is one scare story that is actually true. He surmises the NWO banksters are running the planet into the ground, perhaps with the assistance of a few relatively nefarious alien species, but that the broad consensus of intergalactic-law-respecting ETs are trying to warn humanity and help us wake up and save the planet. (The problem is that the law-abiding ETs are bound to a non-interference policy, while the criminal ETs have no such scruples – and have forged a devil’s pact with the NWO, which controls the UFO file and ruthlessly suppresses attempts at full disclosure.) Hellyer argues that alternative “free energy” technologies exist but have been suppressed by the NWO cartel, which apparently wants to wreck Earth’s environment by various means including needlessly pumping vast amounts of carbon into the atmosphere. The cartel, he argues, couldn’t make money off free energy – so they have decided to mine all the sequestered underground carbon and risk turning Earth into a wasteland.

The root of the problem, according to Hellyer, is that the NWO money mafia has pulled off “the biggest heist in history” by monopolizing the creation of currency, backed by nothing, that is lent into existence at interest. He calls the money masters and their secrecy-driven military-industrial complex “the Cabal” and says it must be overthrown to save humanity and the miraculously biodiverse planet it inhabits.

One of Money Mafia‘s highlights is Hellyer’s account of discovering that 9/11 was an inside job. For many years he was suspicious, but figured the full truth would never be known. Over the years, as evidence accumulated, including AE911Truth’s proof of controlled demolition, he grew increasingly uncomfortable:

“For some years I have been convinced in my heart that 9/11 was an ‘inside job,’ a ‘False Flag Operation’ as they are called by historians, but I studiously avoided exposure to the evidence in order to claim lack of sufficient information as a justification for not getting involved. That long-time comfort zone was lost in November, 2012…”

That was when Hellyer met 9/11 truth author Dr. Judy Wood at a Breakthrough Energy Movement conference in the Netherlands. Awed by Wood’s impressive powerpoint, Hellyer realized that the ten-second conversions of the 110-story Twin Towers into a little bit of rubble and a whole lot of very fine dust was accomplished by “something new and very different from previously known technology.” Today Hellyer is a friend and supporter of Judy Wood, and he includes Dr. Wood’s own three-page summary of her book Where Did the Towers Go?

Despite his grim assessment of our predicament – and his alarming suggestion that a rogue group of ETs has been doing bad things to abductees – Hellyer is optimistic enough to finish his book with “An Action Plan for the Redemption of America and Humankind.” Key portions include:

“…require everyone on the federal government payroll, including members of the armed forces and intelligence agencies, as well as everyone working for a company with a contract with any branch or agency of the federal government, to swear a supplementary oath to uphold the Constitution of the United States and renounce any allegiance to a New World Order dedicated to a supranational unelected government.”

“The President should issue an executive order for the immediate release of all patents concerning clean alternative energy including and especially cold fusion and zero-point energy.”

“The Congress should create a law that would make it a criminal offense for any bank or financial institution, its directors and officers, to make a financial donation to any person holding political office…”

“The Congress should initiate audits of each of the armed forces and all intelligence agencies or contractors, and all research establishments associated with national security and related matters. I read not too long ago where one agency said it would be ready for an audit in 2017. Such chutzpah!”

Hellyer concludes The Money Mafia with a postscript explaining that”Spirituality is the Missing Link…not only to our past, however vague and uncertain that may be, but to our future as we strive to evolve to new dimensions more in keeping with those of our Galactic neighbors.”

Though he may not be 100% right about everything, and though he is a 90-year-old Canadian, Hellyer would make a far better President of the USA than anyone who is likely to run…with the possible exceptions of Gordon Duff, Cynthia McKinney, and Merlin Miller. Buy his book, pass it on to your less-aware friends and family members, and get ready for the coming O.K. Corral style showdown with the NWO.