Home Government The Art and Science of State Terrorism

Part 4 of Counter-intelligence: Shining a Light on Black Operations 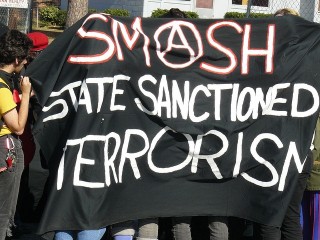 “Necrophilous” is Part 4 of a five part documentary by Scott Noble called Counter-Intelligence: Shining a Light on Black Operations.

In Part 4, filmmaker Scott Noble examines the sadistic fixation of the National Security State with death, pain and permanent injury of individuals and groups whose democratic yearnings conflict with the financial interests of US corporations. He likens this fixation to the psychopathology that motivates serial killers.

Necophilous is defined as having an abnormal fascination with death and the dead. Part 4 begins by examining the decision, in 1945, to drop two atomic bombs on Japan.

A nuclear bomb deliberately targets civilians, a war crime under the Geneva Convention. Truman’s claim that nuking Japan spared GIs the bloodshed of a land invasions turns out to be completely bogus.

He already knew the Japanese were on the verge of surrendering. In fact Secretary of War Henry Stimson was afraid the Japanese would surrender before the US got the chance to deploy atomic weapons – which were mainly intended to terrorize the Soviet Union.

The School of the Americas

Exhibit two is the School of the Americas (SOA), founded in 1946 at Fort Benning Georgia. More than 60,000 soldiers and police from US client states have trained in counter-insurgency techniques (aka state terrorism) at SOA. The use of deaths squads who disappear and assassinate pesky intellectuals, educators, labor leaders and human rights advocates figures prominently in the SOA curriculum.

The CIA-installed Guatemalan dictatorship first used it in the 1950s. After the CIA itself used it during Operation Phoenix in Vietnam, it would be replicated by US-backed regimes of terror throughout Latin America. The same “men in black” reappeared in Bush’s campaign to terrorize Afghans and Iraqis who resisted US occupation.

Aided by Kubark, the official CIA torture manual, the instructors at SOA are also the world’s leading experts in torture. The only purpose of torture is to induce fear and compliance in a hostile population. Despite its role in inducing false confessions, it never produces meaningful intelligence. This is confirmed by decades of research.

Total War and the War on Terror

A final form of American state terrorism is “Total War,” in which civilians are deliberately targeted for extermination.

US dedication to Total War predates the Geneva Convention that declared it a war crime. It dates back to the near total extermination of the Native Americans, followed by the mass slaughter of the Philippine population during US occupation (1898-1946), Vietnamese civilians during the Vietnam War, Clinton’s deliberate bombing of essential Iraqi infrastructure in 1991 and the use of white phosphorus and depleted uranium against civilians during the second invasion of Iraq in 2003.

In fact the War on Terror is really a War OF Terror, aimed at expanding the US empire to include seven Middle East and North African (MENA) countries: Iraq, Libya, Sudan, Somalia, Syria, Lebanon and Iran.*

As Noble ably documents, plans for the American conquest of the above seven countries first crystallized in 1979 under Carter’s National Security Adviser Zbigniew Brzezinski. A fundamental aspect of this campaign has been covert US support for Islamic fundamentalism – the self-same “terrorists” we are fighting in the so-called War on Terror – in Saudi Arabia, Egypt, Palestine, Afghanistan, Syria and elsewhere.

“Necrophilous” concludes by examining evidence that 9-11 was most likely an engineered false flag operation to justify the decades-long war that would be required to establish a permanent military presence in the Middle East and North Africa. The military build-up for the invasion of Afghanistan began months before the so-called “attack” on the Twin Towers.