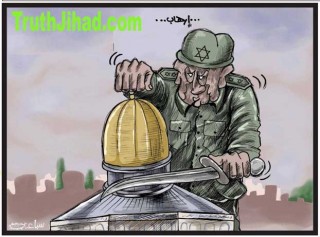 It is the perfect World War III scenario.

The Israelis insist ISIL was behind the al-Aqsa bombing. They say the bombing illustrates the dangers of “radical Islam.”

When rockets are fired against Israel from Syria and Lebanon, Israel bombs and invades those countries. But as in the 34-day war of 2006, Israeli troops suffer defeat on the ground, and Israeli cities take ever-bigger hits from Resistance rockets. While Israel calls on the West for help, Russia gives Israel 24 hours to cease all operations in Syria or face “extremely serious consequences” – a euphemism for possible Russian military action in defense of Syria.

Then, in a televised address that shocks the world, Netanyahu announces that in order to help eradicate the “Islamic menace,” Masjid al-Aqsa will not be rebuilt. In its place, he says, a new Zionist Temple will rise.

Radical Zionists – including the tens of millions of apocalypse-wishing Christian Zionists in the USA – celebrate wildly in the streets. Pakistan puts its nuclear missiles on high alert and targets Tel Aviv. India, Israel’s ally, raises the alert level on missiles targeting Pakistan. Israel, following its Samson Option doctrine, puts its missiles targeting the capitals of Europe, the Middle East, and North America on hair trigger alert.

The world stands on the brink.

Is this scenario plausible? Unfortunately, yes.

But would Israel really bomb Masjid al-Aqsa? And could they realistically try to blame ISIL?

Let’s break down those questions one at a time.

First, we know that powerful right-wing leaders inside Israel conspired to bomb Masjid al-Aqsa in 1980. A former head of the Israeli Mossad told filmmaker Dror Moreh that the Israeli authorities were planning to blow up the support structure of the Dome of the Rock in order to completely destroy the Dome:

“The planning was well advanced with a special type of semtex being used for the bombs. My reaction on discovering this plot was that this was a most dangerous move, and I told the then government that ‘such an action would have led to total war. It would have been apocalyptic for Israel.’”

High-level figures in Israel managed to restrain their insane colleagues, and Masjid al-Aqsa was saved. The plotters were never punished.

But that was back in 1980. Surely today’s Israeli government is not equally crazy?

No, they are not equally crazy. They are one thousand times crazier.

Since 1980, Israel has been taken over by the extremist fanatics who plotted to destroy the Dome. They murdered Yitzhak Rabin, a relatively sane Israeli leader. And according to former BBC Mideast correspondent Alan Hart, they swore a blood oath to never withdraw from the West Bank or Occupied Jerusalem…and to kill anyone (like Rabin) who tried.

Today, if these ultra-Zionist lunatics decide to finish the job they started in 1980, there will be few if any sane Israeli leaders left to stop them.

But surely Israel could not plausibly blame ISIL?! Why would a self-proclaimed “Islamic radical” group bomb an Islamic monument – and not just any Islamic monument, but the first and still all-time greatest and most sacred and prestigious Islamic architectural achievement?

It sounds bizarre. But ISIL is not an ordinary “Islamic extremist” group. It is a false flag group, and it is allied with Israel. Is ideology is potentially compatible with an attack on Masjid al-Aqsa.

ISIL poses as an ultra-extremist Wahhabi-Takfiri group. And extreme Wahhabis and Takfiris love to destroy Islamic monuments. They claim that any Muslim who pays respect to the shrine of a saint, the tomb of a prophet or companion, or any other such holy place is committing the worst possible sin: “shirk” or idolatry. That is their excuse for bulldozing so many of Islam’s spiritual and architectural heritage sites in Mecca and Medina.

The corrupt Saudi royal family, with their court ulama’ dominated by Wahhabis, has destroyed more than 95% of the sacred heritage sites in Mecca. Fewer than 20 structures remain that date back to the time of the Prophet and companions. The article “Saudi Destruction of Muslim Historical Sites” in The American Muslim magazine states: “Five of the renowned ‘Seven Mosques’ initially built by Prophet Muhammad’s daughter and four of his ‘greatest Companions’: Masjid Abu Bakr, Masjid Salman al-Farsi, Masjid Umar ibn al-Khattab, Masjid Sayyida Fatima bint Rasulillah and Masjid Ali ibn Abi Talib have been demolished.”

Ziauddin Sardar writes in “The Destruction of Mecca”: “The house of Khadijah, the first wife of the Prophet Muhammad, has been turned into a block of toilets. The Makkah Hilton is built over the house of Abu Bakr, the closest companion of the prophet and the first caliph.”

If the Saudi rulers hate Islamic monuments that much, is it really a stretch to imagine ISIL, which embraces a much more radical version of the Saudi Wahhabi ideology, blowing up Masjid al-Aqsa? ISIL (paid and encouraged by the Zionists) might even take credit for the deed. They might claim they were trying to prevent Muslims from committing idolatry. In the eyes of extreme Takfiris like ISIL, Muslims who pay respects to sacred monuments like al-Aqsa are idolators and heretics.

Additionally, the al-Aqsa mosque symbolizes Islamic universalism – which both Zionists and Takfiris hate. It is emblematic of Islam’s embrace of all the prophets – including the Jewish prophets and Jesus, peace upon all of them – and the Islamic dispensation according to which all religions must be protected. It was under that dispensation that Muslims have ruled Jerusalem, for the most part wisely and justly, virtually since the very beginning of the religion of Islam – except for a few bloody, brief Crusader interludes including the current one.

The Zionists hate Islamic universalism. They espouse a secular nationalism in which the “chosen people” overthrow God and worship a genocidal settler-colonial nation state in His place.

The ISIL Takfiris also hate Islamic universalism. They think everyone except themselves is an evil unbeliever or heretic. Whereas Muslims want to establish a just society that encompasses all of the beautiful diversity of Godly religious groups, Takfiris just want to cut off everybody else’s head.

So if the Zionists blow up Masjid al-Aqsa and blame ISIL, they might hope to succeed in convincing the world that the culprit is “Islamic terrorism” – just like they did when they blew up the World Trade Center and blamed al-Qaeda.

To stop them, we must expose their plans – as well as their past misdeeds. We must expose the Zionists’ history of false-flag terror attacks including the King David Hotel Bombing of 1946, the Lavon Affair of 1954, the USS Liberty attack of 1967, the Entebbe Hijacking of 1976, the Achille Lauro hijacking of 1985, the 1992 and 1994 bombings in Buenos Aires, and countless others. Above all, we must expose the mother of all false flag operations: The neocon-Zionist coup d’état of September 11th, 2001.