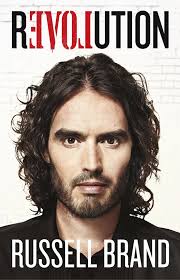 Russell Brand introduces his new book Revolution as an answer to a question Jeremy Paxman asked him in the interview that went viral on YouTube. Brand maintained that voting was a waste of time – that there needed to be a revolution. Paxman’s response was “And how, may I ask, is this revolution going to come about?”

This book never really answers Paxman’s question. In fact, it’s really more a memoir than a political treatise. Like his two earlier books (his 2009 My Book Wook and 2010 Booky Wook 2 ), Revolution mainly concerns Brand’s struggle with addiction. In this third book, however, he delineates a clear link between this struggle and his radicalization.

That being said, his new book is a funny, courageous, brutally honest account of the conscious personal changes that have kept him sober for the last eleven years.

Brand describes quite poignantly the demons that plague many working class people – the constant inner voices telling us we are worthless losers and will never amount to anything. This loser mentality, which starts in the working class home, is brutally reinforced in the public school system, through bullying and emotional abuse by teachers. It’s further compounded by TV advertising hammering on our worst insecurities and promising relief through the continuous purchase of products.

Brand experienced it as a constant anxiety in the pit of his stomach, which he could only relieve with drugs and alcohol, compulsive sex and eventually the adulation of an adoring audience. To overcome these addictions, he had to systematically reprogram himself to see how TV advertising was messing with his mind. A life centered around fulfilling our selfish needs is totally empty and sterile. None of us are the center of the universe. Both spiritually and scientifically (according to quantum physics), each of us in only a small part of a much larger whole.

For Brand a new-found belief in God and a recognition of the pivotal role a deeply corrupt capitalist system plays in all human misery were pivotal in this transformation.

Although I take strong exception to the way 12 step programs ram God down the throats of recovering addicts, I totally agree with Brand’s premise that activists must move out of their selfish individualism to have any hope of making successful revolution. True revolution must be aimed at the collective good. If people do it for their own selfish needs, they only end up replacing the old elite with a new one, as happened in the Soviet Union.

What Brand favors is a political-economic system run on the lines of anarchist participatory democracy. He would have ordinary people running their own neighborhoods, communities, regions and workplaces through popular assemblies and consensus decision making. He gives the example of the popular assemblies that play a direct role in local governance in Porto Alegre Brazil.

The historical revolution he most admires is the Spanish Civil War, though this would seem to contradict his stance on strict nonviolence. Brand is inspired by the way workers pushed aside the capitalist stooges who were running the cities, factories and businesses and started running everything themselves. Unfortunately he seems to overlook the historical reality that these capitalists didn’t step aside voluntarily – that this was accomplished by force.

Despite being a little light on the pragmatics of mass organizing, I found Revolution a great read. Brand is incredibly witty, as well as a classic magpie who remembers everything he reads. His book attempts to synthesize the views of a wide range of political thinkers and activists, though he clearly favors architect and systems theorist Buckminster Fuller, anarchist and Occupy activist David Graeber and political commentator and anarcho-syndicalist Noam Chomsky.