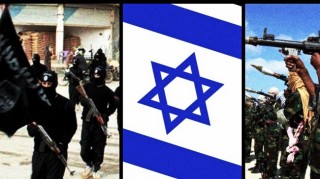 ISIL claims to be a Muslim liberation movement – yet it never attacks Israel or its supporters. Instead, its fighters are treated in Israeli hospitals and visited, complete with accolades, by the likes of Netanyahu.

Why would Jewish State (JS) support Islamic State – and vice-versa?

JS is occupying and ethnically cleansing Muslim holy land. JS launched a global war on Islam with the 9/11 coup d’état. JS is obviously the prime enemy of Muslims. In fact, the struggle to liberate Palestine from the JS extremists should be the top item on every Muslim’s political agenda – the one thing that brings all Muslims, everywhere, together. (Alongside all fair-minded people from all faiths and outlooks.)

Yet IS’s top priority is fighting the Axis of Resistance of Iran, Hezbollah, and Syria – the most capable and competent Islamic resistance movement against JS. And they’re destabilizing Iraq in service to the Oded Yinon plan to smash that country into pieces.

What kind of “Islamic resistance movement” is this?

It’s either a false flag group or a bunch of idiots…or some combination thereof.

Virtually every reputable Islamic scholar on earth, as well as all Muslim political leaders, have condemned IS. Yet the group is not without some popularity on social media, and hundreds of Muslims, mostly young and unsophisticated, have traveled to Iraq and Syria to join the group.

What explains the (limited) appeal of IS?

VT Senior Editor Gordon Duff says the young men who join IS are in it for the “jihadi brides.” Somehow I don’t think that’s a full and complete explanation. There are easier ways to get l- – I mean, married.

Eric Walberg is closer to the mark. Eric writes:

“The caliphate project, implementing sharia, the determination to overthrow the Saudi monarchy, the rejection of fiat money–these are legitimate goals and deserve serious analysis.”

Indeed, all four of these goals are widely shared by Muslims all over the world. Many Muslims would be tempted to follow Attila the Hun or Charlie Manson or Jack the Ripper if that individual said “la ilaha ila llah” and proclaimed a caliphate that would implement sharia, overthrow the Ibn Sauds, and reject fiat money. The Muslim world is more than ready for a new Islam-based social order, and any group that looks like it is having any success whatsoever at achieving it is likely to win a fair amount of support. So it shouldn’t be entirely surprising that such a flawed and dubious group as IS is able to drum up some followers.

I will be discussing “whence the appeal of IS?” on AlEtejah TV this Wednesday Nov. 26th at 1 pm Eastern.

And then I will interview Eric Walberg about the same topic Friday, Nov. 28th, 9 to 10 pm on Truth Jihad Radio.

While you’re waiting, check out my latest debate with IS supporter Anjem Choudary on Press TV: 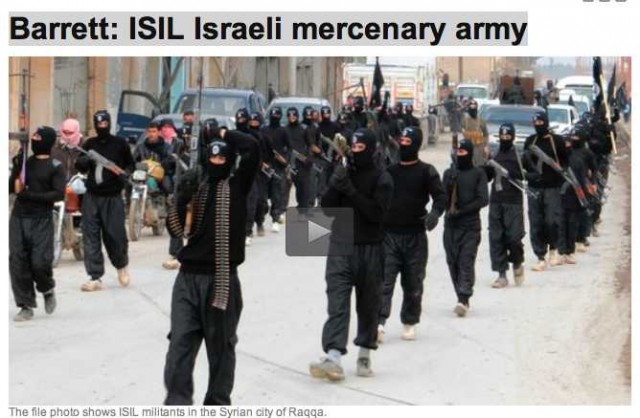 An outspoken American author and Islamic studies expert says the Takfiri ISIL terrorist group is advancing the agenda of the Israeli regime.

Dr. Kevin Barrett told Press TV from Madison that the ISIL is a “mercenary army,” which has been organized by the Zionists.

The ISIL has been fighting on behalf of Zionism in order to “destabilize Syria” and “cripple the anti-Israeli resistance” across the region, Barrett said.

He also said that the ISIL ideology is similar to the Israeli forces committing crimes against the Palestinians in East Jerusalem al-Quds and elsewhere across the occupied Palestinian territories.

He strongly criticized the “Zionist-dominated” Western media for demonizing Muslims by attributing the ISIL atrocities to Islam. The analyst said that the Saudi-backed Wahhabi fanatics and ISIL terrorists were contributing to the Zionists’ global war against Islam.

“The former members of the defunct Iraqi Ba’ath Party and the supporters of slain Iraqi dictator Saddam Hussein have teamed up with the ISIL in order to commit acts of terror against thousands of innocent people,” Barrett said.

The ISIL terrorists control several areas in Syria and Iraq. They have been carrying out horrific acts of violence, including public decapitations and crucifixions, against all communities in the two countries, including against Shias, Sunnis, Kurds, and Christians.

A US-led coalition has been conducting airstrikes against ISIL positions in Iraq and Syria, but there is wide skepticism about the real objective of the airstrikes as well as their effectiveness.

Barrett concluded by saying that Press TV is the sole news channel that has played a crucial role in exposing the Takfiri militants’ crimes.