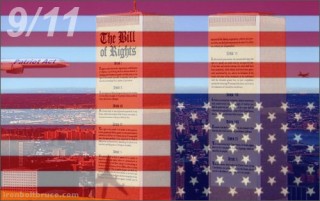 A retired US Army general says America should hold public hearings to investigate 9/11 and the wars it triggered.

Gen. Daniel P. Bolger, a leader of the US campaigns in Iraq and Afghanistan, made the comments during an exclusive interview with Truth Jihad Radio. Gen. Bolger is the author of the explosive new book Why We Lost: A General’s Inside Account of the Iraq and Afghanistan Wars.

Asked about worldwide skepticism concerning the official account of 9/11, including the 80% of Muslims worldwide who believe the attacks were a false flag deception, Gen. Bolger said: “We need to have public hearings sort of like the 9/11 Commission, for our own people first, for Americans! I mean, you’re American. Wouldn’t you like to know – wouldn’t you like to see not just me, but other people like me, come into a public forum and answer the kind of questions you’re asking me today?”

Gen. Bolger’s remarks add further impetus to the accelerating campaign, led by the 9/11 family members, to declassify the top secret 28 pages of the 2002 Joint Congressional Inquiry into 9/11. Those pages, according to numerous Congressional Representatives and Senators who have read them, completely overturn the official account and show that “one or more governments” were behind the 9/11 attacks. The governments in question appear to have been Saudi Arabia and Israel, not Iraq or Afghanistan, raising questions about the real motive of the 9/11 wars.

Meanwhile, CNN has reported that convicted “20th hijacker” Zacarias Moussaoui has charged that the Saudi royal family paid for his flying lessons when he was training as a suicide pilot (or, more likely, being framed as a patsy). Moussaoui makes the allegations against the Saudis in two handwritten letters to federal courts in New York and Oklahoma. He also claims that Saudi Royals plotted to assassinate President Bill Clinton by shooting down Air Force One.

The Saudi government hotly denies these charges, and has even called for the top secret 28 pages to be declassified so it can defend itself. So far, Obama has refused to declassify the 28 pages – which were sealed by then-President George W. Bush – and Congress has not yet voted to force the issue. So it is not the Saudi government but the American government that is covering up the truth. Why would the US government want to hide the truth about the worst catastrophe in its history?

The probable answer is that 9/11 was carried out not only with the help of the Saudi and Israeli governments, but corrupt, treasonous members of the US government as well. Declassifying the 28 pages would reveal that 9/11 was a government-sponsored deception, not an independent “al-Qaeda” operation. This would force the kind of new 9/11 investigation that Gen. Bolger advocates. And such an investigation might lead to some very uncomfortable places.

A real 9/11 investigation would very likely reveal treasonous criminal complicity in the attacks on the part of former officials President George W. Bush, Vice President Dick Cheney, Secretary of Defense Donald Rumsfeld, Undersecretary of Defense Paul Wolfowitz, and at least some members of the upper echelons of the Secret Service and the Armed Forces. Let’s review just some of the abundant evidence pointing in that direction, much of which was already well-known in 2004 thanks to Dr. David Ray Griffin’s book The New Pearl Harbor.

Events at the Emma E. Booker School in Florida on the morning of 9/11 prove that Bush and the Secret Service must have had foreknowledge of the attacks. When Andrew Card spent less than two seconds whispering something in Bush’s ear at 9:03 a.m. supposedly informing the president that a second plane had hit the World Trade Center proving that America was under attack, neither Bush nor the Secret Service responded according to protocol. If it had been a real surprise attack, the Secret Service would have whisked Bush away to safety at maximum speed. Instead, they allowed Bush to spend eight more minutes in a pre-announced location practicing reading with schoolchildren. (The words they chanted, oddly enough, were “kite-plane-must-hit-steel.”)

Bush posed for photo ops for another fifteen minutes, and did not leave the school (where the whole world including potential attackers knew he was) until almost 9:30! Then the presidential limousine followed the pre-announced route, at a leisurely pace, to the airport, where Air Force One did not take off until almost 10 a.m. Obviously, this was no surprise attack! Later, Bush would repeatedly claim that he actually saw the first attack plane hit the North Tower before he entered the classroom – an impossibility unless he saw a live feed in the presidential limousine, set up by 9/11-complicit officials, as alleged by national security sources to former NSA officer-turned-journalist Wayne Madsen.

As for Dick Cheney and Donald Rumsfeld, both have incriminated themselves by telling conflicting, implausible stories about where they were and what they were doing on the morning of 9/11. The 9/11 Commission, trying to cover up Cheney’s conflicting statements, has also been caught in absurdly obvious lies. Secretary of Transportation Norman Mineta’s sworn account of Cheney issuing a stand-down order to allow the attack on the Pentagon to proceed unmolested is just the most obvious of the multiple smoking guns incriminating Cheney and Rumsfeld.

Indeed, the attack on the Pentagon, which occurred almost 90 minutes after the Secret Service, the FAA and the military high command had established phone bridges to deal with the reports of hijackings, could never have happened if it were an actual attack by a hijacked plane and if normal air defense protocols had been followed.

Top US military leaders, trying in vain to follow a hopelessly muddled script, repeatedly perjured themselves before the 9/11 Commission as they offered wildly-conflicting accounts of why US air defenses had not stopped the “hijackings.” 9/11 Commission co-chairs Kean and Hamilton have stated that they considered prosecuting those military leaders for perjury. Then-US Senator Mark Dayton (D-MN) nearly broke down crying on the Senate floor as he railed against the grotesque lies told by his own military leadership.

Shortly thereafter Senator Dayton was forced to flee Washington DC, along with his entire staff, and return to Minnesota due to “terrorist threats” and announce his retirement. His fellow Minnesota Senator and 9/11 skeptic, Paul Wellstone, didn’t get the message, and was murdered, along with his wife, daughter, and staffers, in a rigged plane crash less than a week after he was issued an apparent death threat by Dick Cheney.

Circumstantial evidence points toward Paul Wolfowitz being a 9/11 mastermind. Stanley Hilton and University of Illinois law professor Francis Boyle, both classmates of Wolfowitz at the University of Chicago in the 1960s, have stated that Wolfowitz and other pet students of neocon guru Leo Strauss were even then plotting the coup d’état in America that eventually came to fruition as the 9/11-anthrax attack. The general script for the 9/11-anthrax coup was published in 1968 under the name Coup d’Etat: A Practical Handbook by top neocon strategist Edward Luttwak. (Zionist neocons like Wolfowitz, Luttwak, Dov Zakheim, Richard Perle, Scooter Libby, Elliot Abrams and most of the signatories of PNAC’s September 2000 call for a “New Pearl Harbor” are suspected of designing 9/11 to trick the US into a long-term fight against Israel’s enemies.)

The participation of high-level Americans in the 9/11 deception explains the US government’s reluctance to release the explosive 28 pages and risk igniting the greatest scandal in world history. Such a scandal would destabilize the American political system by annihilating the government’s legitimacy in the eyes of the people. It is easy to see why even non-9/11-complicit officials don’t want to go there.

Yet, that 9/11 scandal already exists, unofficially. Most of the world knows or suspects the truth. America’s legitimacy, in the eyes of the world and its own people, is being terminally sapped by the festering boil of the 9/11 big lie.

The only way to cure this potentially terminal illness is by lancing that boil with the sharp needle of truth. The pain will be temporary; healing will commence quickly. By forthrightly facing and accepting the consequences of such a momentous scandal, the US will be able to re-establish its legitimacy and good name – and perhaps even end its experimental status as Orwellian-Straussian empire, and return to its roots as a Constitutional democratic republic.