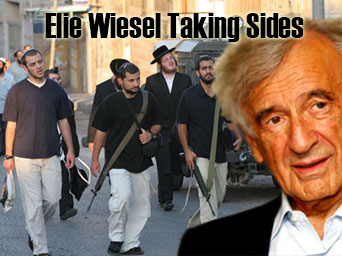 At a time when Israel and “Jews” Zionists and Not Zionists are heavily engaged in the debate about Israel’s “Jewish Nationality laws” there is one conspicuous silence from Elie Wiesel. A man who advance himself as a philosopher and moralist, made a name and money for himself as s survivor of the Holocaust, wrote many books, won the Noble Peace Prize, the Presidential Medal of Freedom, Congressional Gold Medal, Legion of Honor and Commander of the Order of the British Empire. Silence is not golden.

He is known by many of his trademark statements one which stand out ” We must take sides, neutrality helps the oppressor, never the victims”. He is also known for his statement “ … to remain silent and indifferent is the greatest sin of all”. Well, Eli Wiesel always took the side of the oppressor and for that he deserves the title of “Doctor of Hypocrisy”. No one is asking him to speak out in favor of the Palestinians, but to speak out in favor of Israel and the “Jews”.

Never had the guts to stand up and speak out against Israel’s crimes. Moreover and as recently as October of this year, was the signatory of an advertisement that congratulated the Jewish settlers who entered to confiscate 25 apartments in the Palestinians neighborhood of Silwan “ By your act of settlement you make us stand tall”. Elie Wiesel serves on the public council of Elad, the Jewish settlement movement.

Yet he remained silent as Israeli waged its criminal wars against Gaza, over and over, killing thousands, destroying schools, hospitals and shelters destroying places of worship, leveling entire neighborhoods flat, leaving tens of thousands without homes and shelters. He remained silent taking Israel’s side as it wage wars of home demolitions, confiscations of properties and land, targeting assassinations, arbitrary arrests and jailing for years without trial, letting go criminal Jewish settlers accused of cold-blooded murder, destruction of farms and live stocks. He remains silent as Israel continues with the longest military and settler’s occupation in modern times. “ Sometimes we must interfere. When human lives are endangered, when human dignity is in jeopardy, national borders and sensitivities become irrelevant, whenever men or women are persecuted because of their race, religion or political views that place must –at the moment become the center of the universe”.

Nationality laws such as the one advanced and heavily promoted by Bibi Netanyahu and his protégés in the US Senate, House even the White House and leading presidential candidates such as Hilary Clinton and from what we know of past and recent history as advanced by leadership and countries “ nationality laws” ended with justifying legal discrimination against minorities and in Europe in the 30’s where the “Jews were the first victims of these regimes in which phobias and suspicions replaced the principles of social and political pluralism”. Yet with such history no senator or congressman/congresswoman, especially “ Israeli First” is speaking out and against such laws.

“Minorities have no right to any national expression in their own country. All obligatory state symbols are Jewish ones. Only Jews have the right to immigrate freely and receive citizenship. The state will cultivate only the Jewish heritage and traditions; Jewish law is to serve as inspiration for laws, and so on.

One need not be a historian to see the resemblance between the Israeli nationality bill and nationality laws of 80 years ago. Like them, it delineates the boundaries between the most important, dominant group of citizens and the rest, who are turned into guests of a sort in their own country — tolerated ones, for the present.

At the extreme nationalist fringe of the bill’s promoters, efforts are already under way to define its final goal. The followers of the late Rabbi Meir Kahane and members of Lehava will not settle for formulas specifying Israel’s Jewish character and the Jews’ sole claim to national privilege in the state. Their model for the nationality law is the Nuremberg Laws. Their main goal is to preserve Jewish racial purity and to wage war on marriages or romantic relationships between Jews and members of minority groups.”

Ben Sales of The Telegraph (Blogging Jewish News and Culture) writes and share with us the story of an American rabbi from New Jersey by the name of Steven Pruzanky the chief rabbi of a major Orthodox congregation Bbai Yeshurun of Teaneck, NJ

The good rabbi in his Blogg “Dealing with savages” calls for “collective punishment of Arab Israelis and Palestinians until they realize they have no place in Israel”. The rabbi is quoted as saying “ there is a war for the land of Israel that is being waged, and the Arabs who dwell in the land of Israel are the enemy in that war and must vanquished” the rabbi continues and refers to the “the Arab-Muslims animal that span the globe chopping, hacking and merrily decapitating” continuing to write “at a certain point, the unrestrained behavior of unruly animals becomes the fault of the zookeeper, not the animals”.

Even the New York Times, perhaps the most prominent Zionist and pro-Israeli newspaper in the United States in its editorial dated November 24, 2014 and speaking of Israel writes”

“Its Declaration of Independence, which provides the guiding principles for the state, makes clear that the country was established as a homeland for the Jews and guarantees “complete equality of social and political rights to all its inhabitants irrespective of religion, race or sex.” The New York Times expresses heart breaking disappointment as it sees Israeli cabinet approve such a law reserving “national rights only to Jews”

And of course with all of this debate, there is a conspicuous silence from the one and only “Jewish” moralist Dr. Elie Wiesel here in America and of course across the big pond, there is also another silence from a fellow Jewish hypocrite Bernard Henry Levy.

I only wonder what these two “philosopher “ will have to say if the US Senate and House pass a similar bill called the “American Nationality Law” limiting national rights to American Protestants while the French Assembly and Senate limits the nationality rights to French Catholics. One has to wonder which side these two “hypocrites” will take.